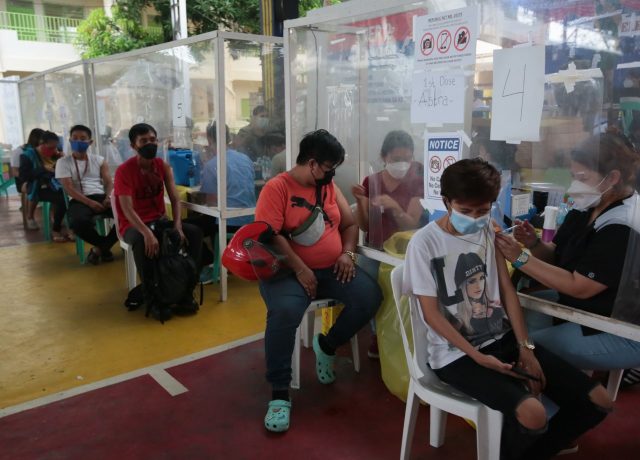 THE PHILIPPINE Health department on Thursday said the Omicron variant of the coronavirus was not detected in the latest genome sequencing run involving more than 40 samples.

The specimens belonged to 12 returning overseas Filipinos and 36 people from local areas with high infection rates, the Department of Health (DoH) said in a statement.

Of the 48 samples sequenced on Wednesday, 38 or about 79% were cases of the highly contagious Delta variant, while “the rest had non-VOC (variant of concern) lineages or had no lineages detected.”

This brings the country’s total cases of the variant first detected in India to 7,886, the agency said.

Of the additional 38 Delta cases, 31 were local and seven were returning Filipinos, the DoH said.

Two of the returning Filipinos had a history of travel to Turkey, it said. Others have been to Jordan, Mexico, Netherlands, Panama, and Peru, it added.

Six of the 31 local Delta cases had “indicated addresses” in Cagayan Valley, while five were from the Cordillera Administrative Region, the Health department said. Mimaropa, Bicol, Western Visayas, Soccsksargen, and Metro Manila had three cases each, while Central Luzon and Calabarzon had two cases each, it added. One case was from Davao Region.

One local Delta patient was ill, while 27 local cases and the seven returning Filipinos have recovered. The health status of three other local cases were still being verified.

A health official earlier said Delta was still the dominant coronavirus strain in the Philippines.

There were 562 new coronavirus infections reported on Thursday, bringing the country’s total to 2.84 million.

The death toll hit 49,936 after 176 more patients died, while recoveries increased by 882 to 2.77 million, the Health agency said in a bulletin.

The agency said 7% of the 176 reported deaths occurred in November.

The Philippines tries to test more inbound travelers to prevent an outbreak of the Omicron variant, which experts said has a large number of mutations and could pose a greater threat than the Delta strain.

The world has already recorded 268.2 million coronavirus cases, according to the Worldometer website, citing various sources including data from the World Health Organization.

The virus has killed 5.3 million people globally, while about 241.4 million patients have recovered, it said.

Meanwhile, Albay Rep. Jose Maria Clemente Sarte Salceda, chair of the House Ways and Means Committee, called on the country’s drug regulator to expedite the approval of emergency use authorization (EUA) of antiviral medicines such as molnupiravir.

“COVID-19 (coronavirus disease 2019) will almost certainly be a seasonal disease, if the experts are correct. The way to deal with this is to make COVID-19 an extremely curable, very normal disease with cheap at-home treatment,” he said in a statement on Wednesday.