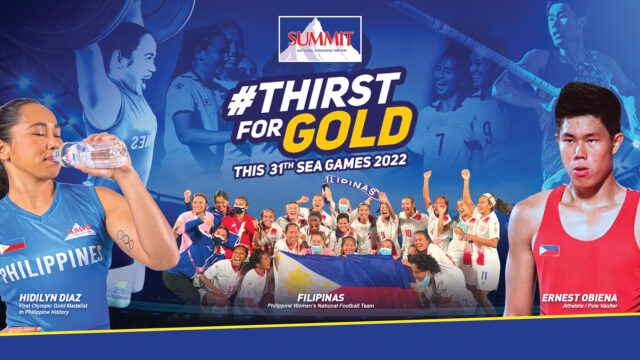 Empowering our heroes Hidilyn Diaz, EJ Obiena and Filipinas (Philippine Women’s National Football Team) with the right hydration and right minerals in their journey to summit!

Summit Natural Drinking Water showcases, once again, its unwavering commitment to supporting Filipino athletes thrive, this time in their bid to bring honor to the country in the 31st Hanoi Southeast Asian (SEA) Games this May 12 to 23, 2022.

As the official bottled water partner of the Philippine Olympic Committee, Summit is one with our athletes in their journey to aspire, perspire, and inspire fellow Filipinos. The Philippines’ first Olympic gold medalist Hidilyn Diaz, Asian pole vault record-holder EJ Obiena, and now, Filipinas, the Philippine National Women’s Football Team are all set to have their hydration levels covered by Summit with the right minerals, allowing them to remain focused on their goals and deliver at peak performance.

Even before Hidilyn and EJ entered the pantheon of Filipino sports icons, Summit has been there to support their respective journeys.

Hidilyn Diaz has been making a name for herself since 2008, when she was selected as a wildcard entry for the Beijing Games, becoming the first-ever Filipina to compete in weightlifting. 2016, the year when Hidilyn Diaz, ended the country’s 20-year Olympic medal drought by winning silver at the women’s 53-kg category in weightlifting. Summit is honored to have witnessed that win at the Rio Olympics. To show their love and support for Diaz, they officially made her one of their ambassadors in the year 2018. The goal is not only for Hidilyn to promote the brand but also to back her up in terms of training and hydration as Summit believes in her persistence, motivation, and capacity in achieving a Gold. True enough, in 2019, Diaz won her first SEA Games Gold medal after topping the 55-kg division. With a committed sponsor by her side, Hidilyn powered through challenges en route to her historic win in the Tokyo Games that ended the country’s 93-year hunt for an Olympic gold medal. With back-to-back milestones from various competitions, she proved that she has always had a #ThirstforGold.

Meanwhile, EJ Obiena joined Team Summit after rising in the pole-vaulting scene here and abroad. He most memorably competed in the Tokyo Olympics against the best, proving that one of the sport’s brightest stars is a Filipino.

The “Golden Boy” has been jumping since he was six years old. Since then, he has always remained active, joining the track teams throughout his years in school, from elementary to college, before competing internationally, starting at the 2019 SEA Games where he bagged the gold medal after clearing 5.45 meters on the bar. A year later he stands as the first Filipino athlete to qualify for Tokyo 2020, capping off as the fifth overall in his group during the qualifiers and 11th overall as he made the cut. Currently, EJ is a world record holder with 5.93m as his best performance and recently he has been winning gold in competitions across the globe.

EJ is also set to be carrying the Philippine flag in the opening ceremony of the upcoming SEA Games, making his participation even more remarkable. With EJ as the official flag bearer, he is not only representing Filipino athletes but giving pride and joy to all Filipinos around the world.

The two Filipino Olympians make room as Summit welcomes to its growing family the Philippine National Women’s Football Team, now known as Filipinas. The young, history-making squad secured a spot in the next year’s FIFA World Cup, becoming the first Philippine team to qualify for the grandest stage of the world’s biggest sport.

The Philippine Women’s National Football Team, also known as the “Filipinas” continue to break barriers as they continue to prove their #ThirstForGold. The Filipinas made a historic feat in the AFC Women’s Asian Cup in India earlier this year by reaching the semifinals and qualifying for the FIFA Women’s World Cup for the first time ever. Now they are embarking on the journey towards the 31st SEA Games by making sure that they are well prepared and well trained with the help of getting support and the right minerals from Summit.

With the support of Summit Natural Drinking Water, the Filipinas look to carry the momentum from their World Cup qualification onto the SEA Games next month. Meanwhile, Hidilyn and EJ are reigning gold medalists at the Games and are thirsty for more.

Show your support as our athletes #ThirstForGold at the SEA Games! Every purchase of Summit Natural Drinking Water bottle contributes to the training of our athletes taking them one step closer to their goals.

This year, Summit Natural Drinking water also partners with Liv3ly in promoting an active lifestyle and supporting Filipinos as they #ThirstForMore.

Liv3ly is a social fitness app with the goal of motivating users to move through engaging, experiences, gamification, and rewards. With the app, users can take on running challenges, track records, and compete with other users.

Radio Communications of the Philippines, Inc. to hold annual meeting of stockholders virtually on August 2