CREAMLINE aims to secure the right to represent the country in the Asian Volleyball Confederation (AVC) Cup while King Whale of Taipei (KWT) guns for the second and last finals berth as the two face off on Friday in the Premier Volleyball League Invitational at the Filoil EcoOil Centre. 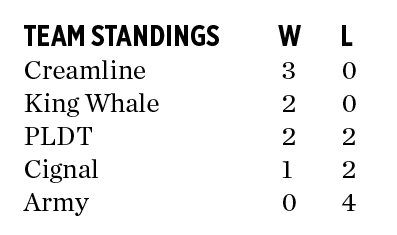 A triumph against KWT in their 4 p.m. showdown would seal Creamline the honor to carry the Philippine flag in the AVC Cup slated set late this month at the PhilSports Complex.

KWT is expected to give the reigning Open Conference champion a run for its money as it shoots for the win that would complete the cast in the finals scheduled on Sunday at the MOA Arena.

Although KWT prevailed over PLDT, the former is not assured of a spot in the finals just yet as it would need to win at last one of its last two games including the last versus Cignal on Saturday for it to advance to the finals.

The Cool Smashers are expected to parade their power-hitting troika of Open Conference MVP Tots Carlos, skipper Alyssa Valdez and Jema Galanza while the Taiwanese should rely heavily on Beatriz Flavio de Carvalho and Chen Li Jun, who came through with the biggest hits in the fifth set to seal the win. — Joey Villar

The ‘Chosen One’ fulfils destiny as James claims scoring record