WITH an outright finals berth within its reach, unscathed National University (NU) wants no slip-up in taking care of Santo Tomas as its last hurdle in the University Athletic Association of the Philippines (UAAP) women’s volleyball tournament today at the Mall of Asia Arena in Pasay City.

At 13-0, the Lady Bulldogs aim to get the job done at 4 p.m. versus the Golden Tigresses (9-4) for a big win that would also turn the traditional Final Four into a harder stepladder format for the other teams below them.

Santo Tomas, currently at third, and No. 2 La Salle (10-3) are already in that playoff picture, leaving Adamson (7-6) and reigning champion Ateneo (7-6) in a scramble for the last slot against different opponents. 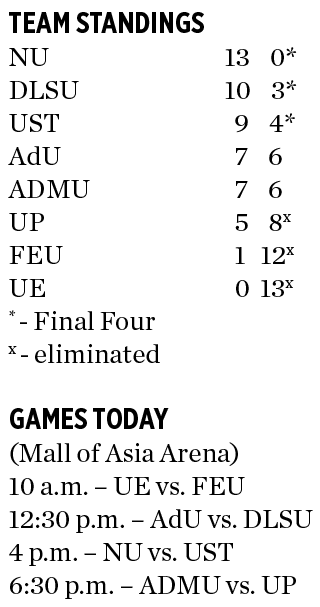 In case of a tie, Adamson and Ateneo would slug it out in a knockout duel for the last playoff ticket.

For NU, the stakes are higher.

Peso to rise ahead of data releases