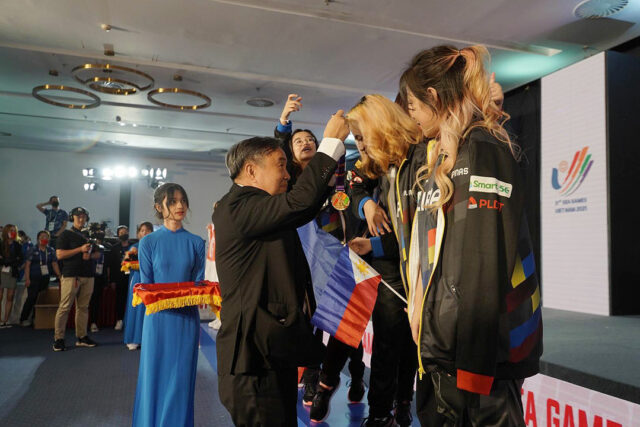 Eighteen-year-old Charize “Yugen” Doble utilized the Corki hero twice to help lift Team Philippines-Sibol, represented by Grindsky Eris, to a historic 3-0 triumph over Singapore for the gold at the end of the three-round League of Legends: Wild Rift finals late on Wednesday night.

Team Sibol, represented by Blacklist in the Games Mobile Legends: Bang Bang, is already in the semifinals awaiting its next opponent late Thursday, with the finals slated on Friday.

The Philippines, which won three golds, a silver, and a bronze during esports’ debut into the SEA Games’ calendar in the 2019 edition, is taking part in the nine of the 11 events slated in these games, with its strongest teams entered in Wild Rift, Mobile Legends and CrossFire.

Ms. Doble’s Corki character did a lot of damage as Team Sibol eventually swept its clash with the Singaporeans with scores of 16-9, 17-8, 27-21.

In Game 2, Corki delivered nine kills after respawning only once.

Claiming the SEA Games gold has handed Ms. Doble one of her biggest achievements after she earlier rallied her team Grand Sky Eris to the Southeast Asian Esports Championship this year, while claiming Most Valuable Player honors along the way.

Ms. Doble’s Corki, which is a bombardier, gives at least 20% physical damage with Hextech munition, long distance capabilities with the Valkyrie and short range attacks with the Gatling Gun.

In Game 3, Ms. Doble had some difficulty as she had only six kills, and a need to respawn four times as well.

Team Sibol reached the finals after sweeping the four-team group stage, and hurdled Thailand, 3-1, in the semifinals.