MVP candidate Rhenz Abando admitted he and the Letran Knights have been thinking of their bitter rivals, the San Beda Lions, since Day One. And they have concluded that the only way to beat their archenemy is to play ready and stay focused.

“We always think of San Beda since the start,” said Mr. Abando on the eve of the San Beda-Letran NCAA Season 97 final elimination round game set at 3 p.m. on Friday before a season-first live audience at the Filoil Flying V Arena in San Juan. 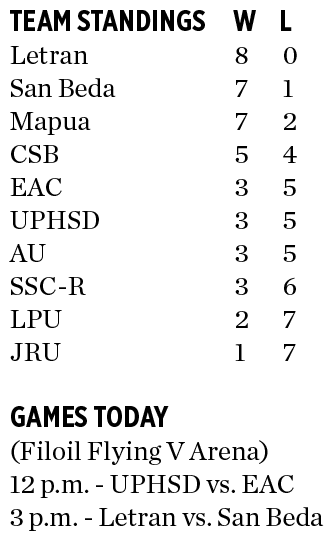 “We knew San Beda will make it difficult for us, that’s why we have to be always ready and we need to be more focused than them,” he added.

Apart from the pride and bragging rights staked between the age-old rivals, the Knights and the Lions will battle for the top seed, and for the latter, the other twice-to-beat advantage in the Final Four.

The defending champion had already claimed the important semis incentive after it romped to its eighth straight win following a pulsating 73-69 triumph over San Sebastian at the La Salle Greenhills Gym on Tuesday.

San Beda, for its part, edged College of St. Benilde, 67-63, the same day to stay at No. 2 and would forge a tie for first with Letran and eventually snare the semis bonus due to the winner-over-the-other rule in breaking a two-way tie if it could emerge victorious.

Between the two, the stakes are higher for the Lions as a defeat would mean it would fall to a tie for No. 2 with the Mapua Cardinals and eventually to No. 3 since the former succumbed to the latter, 68-54, on Saturday.

If it happens, San Beda would have to go through the rigors of playing in the play-in where it will play No. 4 team St. Benilde (5-4) with the winner advancing to the Final Four.

Aside from Mr. Abando, the Knights should draw strength from Jeo Ambohot and Fran Yu, who were vital cogs in their title conquest of the Lions in the league’s last season three years ago.

It will also be extra special for James Kwekuteye, JB Bahio and Franz Abuda, who are all remnants from that San Beda squad, as they look to exact revenge and erase the stigma of that painful defeat.

Peso recovers vs dollar ahead of BSP rate decision