LETRAN guns for a twice-to-beat advantage in the Final Four as it squares off with San Sebastian College (SSC) on Tuesday in the 97th National Collegiate Athletic Association (NCAA) basketball tournament at the La Salle Greenhills Gym.

The Knights eliminated the Jose Rizal University (JRU) Bombers, 81-59, on Saturday to stretch their streak to seven and another win over the Stags in their 3 p.m. encounter would clinch them one of the two Final Four incentives.

Skipper Jeo Ambohot, who had 14 points and 12 rebounds in their recent win, knows they will be in for a tough ride against a San Sebastian team desperate to stay in the play-in race. 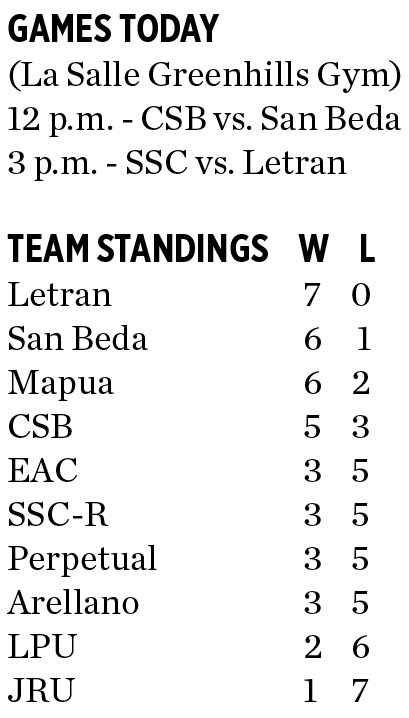 “Our mindset is always to play each game as if it’s a championship game and we will keep on doing it,” said the 6-7 Mr. Ambohot, who hopes to help the Muralla-based school win another championship on his final season.

The Stags absorbed a 71-62 loss to the College of St. Benilde (CSB) Blazers on Friday that sent the former into a four-way logjam at fifth to eighth spots with the Emilio Aguinaldo Generals, the Perpetual Help Altas and Arellano University (AU) Chiefs with identical 3-5 cards.

For SSC to make it through, it would need to win all their remaining two games including this one against the defending champion.

The Lions are out to bounce back from a 68-54 defeat at the hands of No. 3 Mapua Cardinals (6-2), 68-54, on Saturday against the Blazers who are riding the crest of their emphatic triumph over the Stags.

“Tough game for us because San Beda has been kings of the NCAA this whole decade and a half, they have a great program,” said CSB coach Charles Tiu. “For us, we don’t have much to play for while they are fighting for a twice-to-beat advantage and to escape the play-in.”

“But we will try to compete with them,” he added.