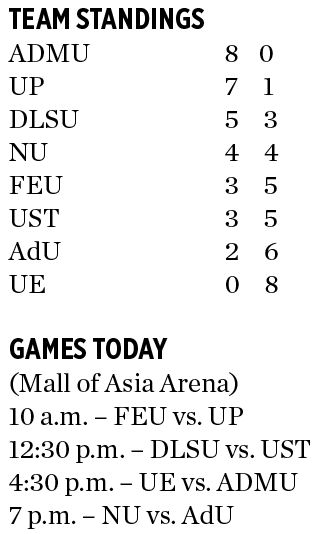 Other matches also offer crucial implications in the middle of the standings as second round heats up featuring third-running La Salle (5-3) against Santo Tomas (3-5) at 12:30 p.m. and No. 4 National University (NU) (4-4) against Adamson (2-6) in the main event at 7 p.m.

Both the Blue Eagles and the Fighting Maroons picked up from where they left off in the first phase and opened the second round on a high note with wins against La Salle and National University, respectively, to fortify their grips on the driver seats with sizzling streaks to show.

Reigning champion Ateneo boasts a 34-game spree since 2018 laced with three straight titles while UP is on a 7-game rampage this season for its best start since winning its last title in 1986.

The Blue Eagles dominated the Red Warriors in the first round, 94-72, while the Maroons bested the Tamaraws, 83-76. This time, both are bracing for a strong challenge from their oppositions.

“We worked hard to be in this situation, but we still have to be consistent. We still have rooms for improvement so we’re hoping for the break to fill those,” said Fighting Maroons coach Goldwin Monteverde, not wanting to rest on their laurels to stay lurking behind the untouched Blue Eagles.

The same goes for Ateneo, which made the most out of the break to polish their wings for a steadier flight this time after numerous scares in the first eight games.

“We’re having to fight to win rather than play to win (owing to the short offseason preparation due to the pandemic) so we’ll try to get back to basics (from the break) and and re-enforce some of the things that believe are really the foundation of our system,” noted coach Tab Baldwin.

Expected to banner their respective attacks are Ateneo’s Ange Kouame and UP’s Zavier Lucero, who have made it a narrow two-way race for the Most Valuable Player plum after eight games.

Mr. Kouame holds the lead with 68.0 statistical points (sps) buoyed by a league-best 2.38 blocks with Mr. Lucero just a razor-thin behind sporting 67.0 sps.