COLLEGE of St. Benilde (CSB) and Mapua target solo third spot as the two tackle each other on Tuesday even as San Sebastian and Jose Rizal University (JRU) seek to stay in the hunt and face off in the 97th National Collegiate Athletic Association (NCAA) basketball tournament at the La Salle Greenhills Gym.

The Blazers are out to bounce back from a heartbreaking 74-68 defeat to the JRU Bombers last week, while the Cardinals aim to ride the crest of their 95-83 triumph over the Perpetual Help Altas on Wednesday when the two clash at 12 p.m. 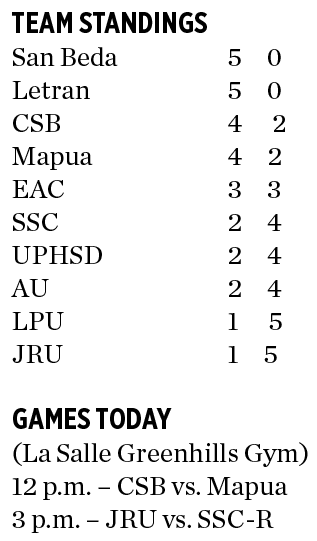 Both CSB and Mapua are presently tied at No. 3 with 4-2 records and the winner will move up the ladder and close in on pacesetters Letran and San Beda, which possess pristine 5-0 cards.

MVP candidate Will Gozum will be a game-time call after he hurt a foot in that loss by CSB to JRU last time.

In that game, Mr. Gozum was starting to wax hot with 17 points and 10 rebounds before being sat out the whole of the final quarter due to that problematic foot.

“(Mr.) Gozum is still slowly recovering and has yet to practice with us, probably a game-time decision,” CSB coach Charles Tiu on Monday told The STAR. “I think he just needs rest.”

The 6-6 former NCAA high school MVP is irreplaceable and his presence would be a big boost to the Blazers’ campaign as he is averaging 14 points, about 10 boards, a steal and 1.5 blocks a game.

And Mr. Tiu thinks they would need Mr. Gozum playing a deep and tough Mapua side.

“Mapua is a very good team. They are well coached, always tough to play and have a deep roster with so many different guy scoring,” said Mr. Tiu.