DEANDRE Ayton posted his 20th double-double of the season and Cameron Payne had 18 points and 12 assists as the Phoenix Suns rallied late for a 102-99 win over the host Orlando Magic on Tuesday night.

Phoenix led 73-58 with 3:30 left in the third quarter. But the Magic went ahead for the first time since the opening period when Wendell Carter, Jr. made two free throws for a 97-96 advantage with 1:51 remaining.

Ayton’s basket in the lane off a feed from Payne gave the Suns a 100-97 lead with 12.7 seconds to go and Payne added two free throws with 6.9 seconds left, making it 102-99. Mikal Bridges sealed the outcome by blocking Franz Wagner’s 3-point try near the top of the key. 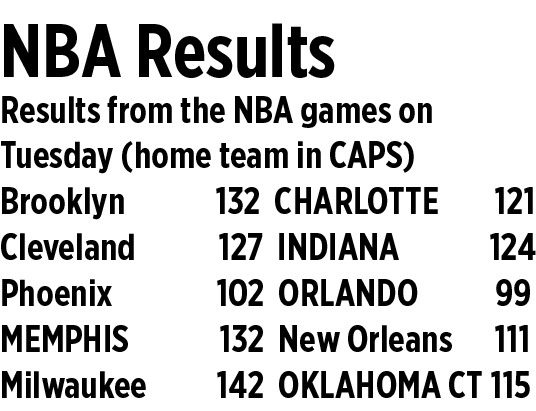 Three of Phoenix’s top six scorers — All-Stars Devin Booker (health and safety protocol) and Chris Paul (thumb) as well as Cam Johnson (quad) — were out of the lineup for the second consecutive game.

Ayton had a double-double by half time as the Suns took a 53-43 lead. The 6-foot-11 center finished with 21 points and 19 rebounds to help Phoenix sweep a season series with the Magic for the first time since 2015-16.

Payne notched his second points-assists double-double in three games and Landry Shamet also played a big role offensively for Phoenix, scoring 21 points on the strength of 6-for-10 shooting from beyond the arc.

Bridges added 13 points and three steals, Aaron Holiday came off the bench to score 11 points and Jae Crowder had seven points and 11 rebounds.

Orlando, which entered the game tied with the Houston Rockets for the NBA’s worst record, missed 32 3-point attempts (7-for-39) and committed 12 total turnovers. The Magic also played without Jalen Suggs, who missed his second straight game with a sprained right ankle.

In his return from a two-game absence due to illness, Carter collected 20 points and 12 rebounds for his seventh consecutive double-double. Moe Wagner added 12 points and seven rebounds off the bench, Markelle Fultz tied his season-high with 11 points and Mo Bamba had nine points and 15 rebounds.

Orlando’s Cole Anthony played the fourth quarter with the bridge of his nose bandaged, after he was inadvertently hit in the face by Bamba early in the second half. Anthony (five assists) scored nine of his 11 points in the final period. — Reuters

Blue Eagles and Fighting Maroons back to action against separate foes

GS Warriors out to craft response in Game 2 vs Celtics