MERALCO turned to full power and tripped Terrafirma, 107-95, to coast to its sixth win in seven starts and stay in the Top 2 of the Philippine Basketball Association (PBA) Governors’ Cup standings on Thursday at the Ynares Center in Antipolo City.

The Bolts used a 30-19 exchange in the second quarter to break away to a 60-45 margin and kept on charging en route to their second straight victory after their 109-98 embarrassment to erstwhile winless NorthPort last week.

Meralco coach Norman Black said the squad was conscious about not repeating the NorthPort misstep against a Dyip crew (2-6) that’s hungry for an upset and seeking a major boost to their playoffs drive. 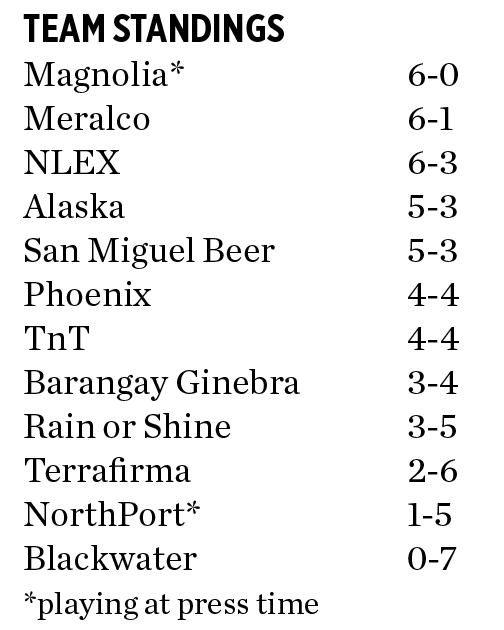 “Certainly, that loss to NorthPort was on our minds entering this game. We didn’t want to stumble again knowing the elimination round is coming to an end pretty soon and everyone’s fighting for position,” said Mr. Black.

“We don’t want to fall today to Terrafirma and we just want to come out and run as much as possible, play good defense, get a win and prepare for our next game against Alaska,” he added.

That they did as the Bolts scored 20 fastbreak points and held the Dyip to a 33-of-82 shooting clip (40.2%) while making half of their 78 attempts in their offensive end.

Antonio Hester banged in 23 with 17 rebounds for Terrafirma, which fell to back-to-back losses and stranded at 10th spot.

Meanwhile, third-running NLEX beefed up for its Top 4 push by trading with Phoenix Super LPG to get stretch big man Justin Chua on Thursday.

The Road Warriors welcomed Mr. Chua even as they sent young forward Kris Porter as well as their 47th season second-round pick and 48th season first-round selection to the Fuel Masters.

“We like Justin’s game and we believe his style of play is a good fit for our system,” said NLEX coach Yeng Guiao. “He is a big man who can shoot, he’s a good player who can play coming off ball screens and he can post as well.”

NLEX (6-3) is making a run for the twice-to-beat incentive in the quarterfinals while dealing with injuries to frontliners Tony Semerad, Calvin Oftana and Mike Miranda.

Rare diseases patients should not be left behind