Home Special Features An opportunity to sustain a good start 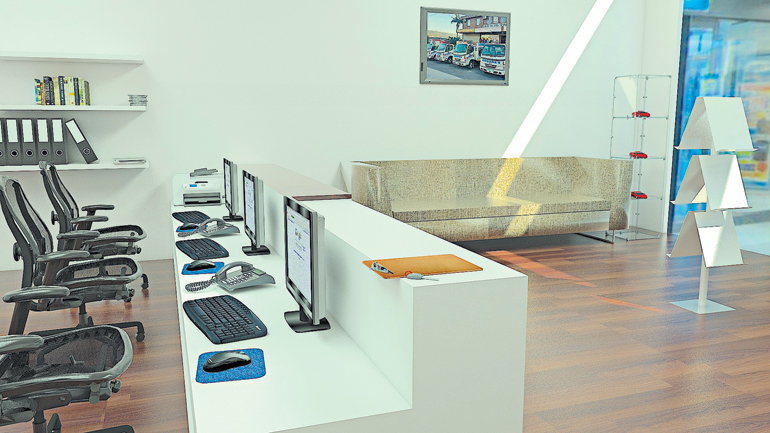 The Philippine office segment has seen indications of an initial rebound so far this year, and this has been largely marked by the growing preference for flexibility at work.

As shared by Joey Roi Bondoc, associate director and head of research at Colliers Philippines, in a special report in BusinessWorld earlier this month, data from their firm recorded that 306,100 square meters (sq.m.) of new supply completed in the first quarter (Q1) of 2022, exceeding the 114,300 sq.m. (1.2 million sq. ft.) completed in the fourth quarter (Q4) of 2021.

Colliers also noted that office transactions in the capital region totaled 146,100 sq.m., an increase of 30% year-on-year.

Robinsons Land Corp. (RLC) finds themselves in a similar path with these positive observations, as Jericho P. Go, the developer’s senior vice-president and business unit general manager for Offices, said.

“We have seen a positive uptick in office leasing transactions with the way we have configured our developments,” Mr. Go told BusinessWorld in an e-mail.

In addition, Colliers observed that traditional and outsourcing firms took up space during Q1, both inside and outside the metro. Most of the firms leased space in Fort Bonifacio, the Bay Area, and Makati CBD. Outside of Metro Manila, absorption of new office space was spotted in Pampanga, Cebu, Iloilo, Davao, and Cagayan de Oro.

This expanded presence of offices is reflected by the implementation of a hub-and-spoke strategy, where offices retain operations in urban centers or CBDs while expanding them in “second-and third-tier cities and locations.”

On RLC’s end, this strategy has been applied even before the pandemic hit the property sector.

“In Metro Manila, we have the largest population base and a wealth of labor resource in terms of complexity, availability, and diversity,” Mr. Go said.

While maintaining presence in Metro Manila, RLC is aggressively expanding in key cities in the provinces.

“Going into these provinces, we provide options to those who want to work near their families. We are experiencing an increase in inquiries and signups in key cities,” the developer said.

Alexis Ortiga, vice-president of the SM Commercial Properties Group, under SM Prime Holdings, Inc. (SMPH), also observed an increase of offices in the fringe areas going into the provinces.

“Iloilo is a very popular market right now. The Cavite, Laguna, and Batangas areas are also popular for both warehouses and offices,” Mr. Ortiga said.

Also being realized in the past six months, and beyond, is stronger flexibility in work, where on-site and remote modes converge.

The latest Asia Pacific Workforce Preferences Barometer of Jones Lang LaSalle (JLL) highlighted that an ‘optimal point’ has been reached among office workers, with hybrid work preferred by 60% of employees surveyed and being implemented already by 55% of respondents. The research also found that three in four employees agree that hybrid is a non-negotiable factor in talent retention, and 78% of respondents who advocate remote working are actually managers.

JLL’s research further noted that the office is set to become a hub for human connection and innovation, as 56% of organizations plan to refit or redesign their office space in the next 12 months.

Mr. Ortiga of SMPH agrees that flexible office spaces are now preferred by a lot of tenants.

“They want more open layouts, higher floor-to-ceiling clearance, and of course a lot of them have heavily invested in safety protocols,” he said.

RLC, for its part, observed similar needs for flexibility amid the pandemic, and so has resolved to reconfigure their workspaces to meet employees’ needs in the new normal, as shown in their headquarters at the 25th floor of Robinsons Cyberscape Alpha in Ortigas Center, Pasig City.

“Professionals have grown accustomed to working from home during the pandemic, but the disadvantages in that include interruptions in power supply, internet connection, and mental health because of the relative isolation as one works alone and is not in personal contact with peers,” Mr. Go observed.

Considering these factors, RLC developed an environment designed for employees to “enjoy the best of both worlds.” The developer incorporated elements of a home, such as the living room area, the pantry, and the bar; while also adding ‘fun’ elements such as a billiards table, a Ping-Pong table, a foosball table.

“All of these facilitate collaboration, interaction, coordination, camaraderie, and synergy within the workplace, ultimately creating a winning culture so that when employees go back to the office, they are inspired to create innovations and new ways of doing business,” Mr. Go explained.

Relevant technologies have also been rolled out, alongside health and safety protocols.

“For instance, we installed generous provisions for treated outdoor air to deliver airflow rates that exceed the [Department of Labor and Employment] standard. Through this, we ensure a healthy work environment with air exchange that expel virus. More and more people would want to have that,” Mr. Go said.

Safety features have been a long-standing practice for SMPH’s offices.

“For example, hourly cleaning and sanitation of high touch point areas — we’ve been doing that for a long time now. Having MERV 13 filters in our ventilation systems so that the air we breathe inside SM Offices is cleaner,” Mr. Ortiga shared. Backed by a good start, the office segment is expected to sustain its progress towards recovery.

Lobien Realty Group (LRG) notes that this recovery, particularly in the Metro Manila market, is set to start in Q4 2022. LRG reported that the office vacancy rate in the said market is expected to improve from first half’s 19% as office demand picks up with increased economic activity.

“Opportunity is seen for office space tenants and locators due to the 19% vacancy rates, ample supply of office space pipeline in all office space grades, and the possible weakening of rental rates for landlords to shed the available office supply in the market,” LRG was quoted as saying in a recent BusinessWorld report.

Further on demand, Mr. Cordero of Cushman & Wakefield spoke of a favorable long-term outlook for the major demand drivers of office space.

Citing a recent study of the firm on the Asia-Pacific office market, Mr. Cordero said total employment in office-using jobs in the Philippines is expected to grow by more than 2.4 million, which translates to more than 8.3 million sq.m. in office space demand. This is equivalent to a more than 70% increase in the current stock of office space in the country.

“The near-term outlook on net office space absorption in the Philippines will still be lower than the estimated average in the last 15 years,” Mr. Cordero continued. “The expansionary demand in the medium term, however, will come from the continued growth of the outsourcing and information technology and business processing management (IT-BPM) companies.”

“In the office sector where there is an oversupply, the return of POGO (Philippine offshore gaming operators) may reduce vacancies. When the supply and demand imbalance is corrected, there is an expectation that rental rates will improve. We also see an opportunity with the requirements on data centers. Sectors such as data analytics, robotics, and artificial intelligence, will benefit from the infrastructure technology provided by data centers to help them grow. These industries are expected to take up office spaces,” he said.

However, caution is indicated on JLL’s most recent outlook. In its “Global Real Estate Perspective” for the office segment this month, JLL found that current economic headwinds are impacting the construction sector and will flow through to the development pipeline over the coming 12 to 24 months.

“Rising construction costs, a shortage of labor (especially in Eastern Europe due to the war in Ukraine), and supply chain disruption are creating uncertainty and will help to shape the development pipeline. The future supply pipeline is consequently anticipated to tighten and there is potential for deliveries to be delayed,” JLL explained on its website.

Likewise, RLC, as an importer of raw materials and equipment for office developments such as building elevators, generation sets, air-conditioning units and escalators, sees certain global events as a cause for concern.

“Such events may affect the flow of goods and services and the deliveries on raw materials and equipment. When deliveries are disrupted, it will affect the completion and handover of projects,” Mr. Go said.

Amid these challenges, for Mr. Go, the segment’s recovery is sure to happen.

“Slowly but surely, we are nearing pre-pandemic levels. We are optimistic because of the hub-and-spoke strategy that we have adopted even before the pandemic hit, with Metro Manila as the base of operations. This strategy effectively brings in new inquiries and signups for the business,” Mr. Go said.

Mr. Go also believes that RLC’s large investment in flexible spaces will start its growth for a ‘better normal.’

“As we go back to the office, performance is expected to improve for our company and like-minded companies, who would want to start again and enjoy the same benefits of collaborative workspaces, gaming areas, airflow rates, etc. That concept is resonating well to office locators as evidenced by the increase in inquiries and signups year-on-year since 2020,” Mr. Go said.

SMPH, meanwhile, believes it has figured out a design formula that works well for employers, tenant-partners, and their employees and guests.

“Given our amenities and conveniences, I’m proud to say we give real meaning to the phrase ‘work-life balance’, and how we’re able to treat each tenant-partners and their employees as human beings, not just tenants that fill up our spaces,” Mr. Ortiga said.