Home Special Features The makings of a ‘world-class’ toll bridge 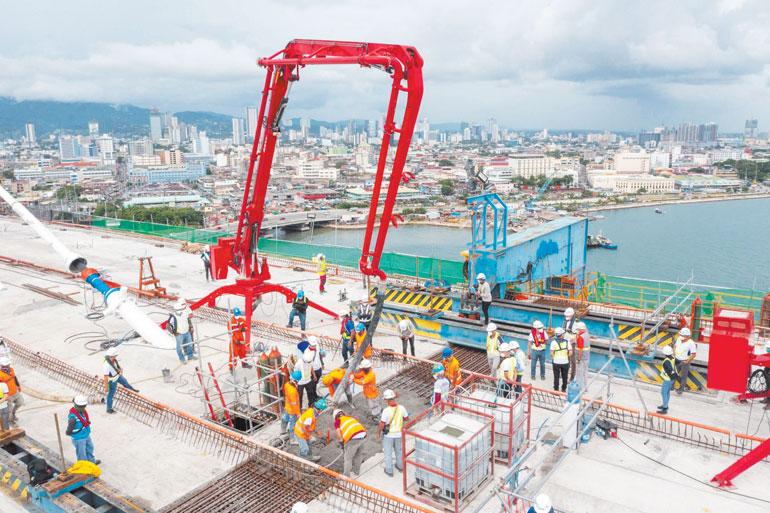 Bridges hold a monumental purpose in an archipelagic country like the Philippines. The recently built Cebu-Cordova Link Expressway (CCLEX) is among those bridges, designed to connect islands and the Filipinos with strength and faith in mind.

One of the largest infrastructures in the country, CCLEX boasts its sturdy foundation and symbolic design, as well as innovative features and convenient services, created by hundreds of foreign and local builders.

The P33-billion toll bridge is a project of Metro Pacific Tollways Corporation (MPTC) being implemented by the Cebu Cordova Link Expressway Corporation (CCLEC) under a joint venture agreement with the City of Cebu and the Municipality of Cordova. Over 2,000 workers were fielded and helped construct the project, with the CCLEC engaging the services of its main contractor, Cebu Link Joint Venture.

The bridge has a design speed of 80kph and navigational clearance of 51m for large vessels to pass underneath. Its twin pylons stand at 145-meter high, with 14 stay cables on each sides that hold up the bridge. CCLEX is also made to be vessel-collision proof and withstand an earthquake up to magnitude ten.

“Building structures in this region is completely different [from] any other part of the world. Here, we are in the Pacific Ring of Fire and therefore we are challenged by earthquakes and typhoons,” said Pedro M. Martinez Adrados, the former project director at Cebu Link Joint Venture. “The top part of the pylon and the 14 stay cables have been designed to minimize the impact of winds of up to 250kph. The foundations are made of 21 piles. The formation of those piles [has] been designed to withstand the vessel impacts up to 110 meganewtons.”

According to Robert Uthwatt, the owner’s engineer, each pile cap has about 3,000m³ of concrete, the depth is up to 70m, and reinforcement of up to 90 tons.

“In order to overcome an eventual earthquake, all bridges are equipped with special devices called bearings. The bearings are designed to dissipate a large amount of energy,” added Daniel Muñoz González, current project director of Cebu Link Joint Venture.

“Once CCLEX is finished, this is going to be a world-class bridge,” Mr. Martinez had said.

A distinctive feature was incorporated in the design of CCLEX through the eight 40-meter high crosses, which symbolize Cebu’s historic role in terms of Catholic devotion in the Philippines.

Christianity arrived in the country 500 years ago, as introduced by Spain. The crosses in CCLEX found inspiration from the cross planted by Portuguese explorer Ferdinand Magellan in Cebu on April 21, 1521.

“We add a deeper and loftier meaning to CCLEX by adding eight 40-meter crosses that celebrate the coming of Christ 500 years ago,” MPTC Chairman Manuel V. Pangilinan said in a video message during the blessing and lighting of the crosses in April last year. “These crosses will illuminate the skyline of Metro Cebu — beacons of hope and progress, symbols of achievement, and everything Cebuanos are proud of.”

The eight lighted crosses are placed on the top of CCLEX’s twin pylons. And while serving as an iconic feature, the cross also supports the bridge itself.

“The design of the cross was done in such a way that it is fully integrated with the bridge. It’s easily achieved by hiding all the bolts and all the fixtures,” explained Mr. Muñoz. “We can say that is not only an aesthetic feature of the bridge, it also contributes to the erection of the bridge.”

“[CCLEX] will become an iconic landmark for the Cebuanos and it will be a bridge that they will be proud of and they will be identified with,” he added.”

Also assuring a safe and convenient trip for motorists passing by the bridge, CCLEX is also equipped with innovative features and other services.

The bridge utilizes an enhanced radio frequency identification (RFID), a form of wireless communication, as its electronic toll collection system. This would help for a higher and more efficient lane throughput.

Overloaded vehicles that would go by the bridge would also be detected through weigh-in-motion sensors. IP-Based Speed Detection Cameras and HD CCTVs, meanwhile, are also included and would cover the whole expressway to monitor traffic and detect incidents.

Various facilities such as gasoline stations, retail outlets, convenience stores, and restaurants, as well as security, medical, and maintenance centers, are also accessible to motorists for their needs, thereby providing a convenient travel experience for them.

An estimated 50,000 vehicles are expected to pass by daily on CCLEX. The new bridge seeks to ease the traffic problem in the existing Marcelo Fernand Bridge and Mandaue-Mactan Bridge.

“Other than providing solutions to the escalating traffic in Metro Cebu, we’re confident that this new bridge project not just connects the island, but connects people in this area of the country,” CCLEC General Manager Allan G. Alfon said.

Aside from reducing the traffic and making travel more convenient for motorists, CCLEX is also expected to bring more economic opportunities to Cebu and the Visayas region.

“This is the largest single investment anybody’s made in the region,” said Mr. Pangilinan

“Our vision is to help connect the Philippines,” the MPTC chairman added. “The bridge will be a catalyst for the economic development of Cebu. We believe this project will change the lives of our people.” — Chelsey Keith P. Ignacio

Keeping pace with the ever-expanding online and social media