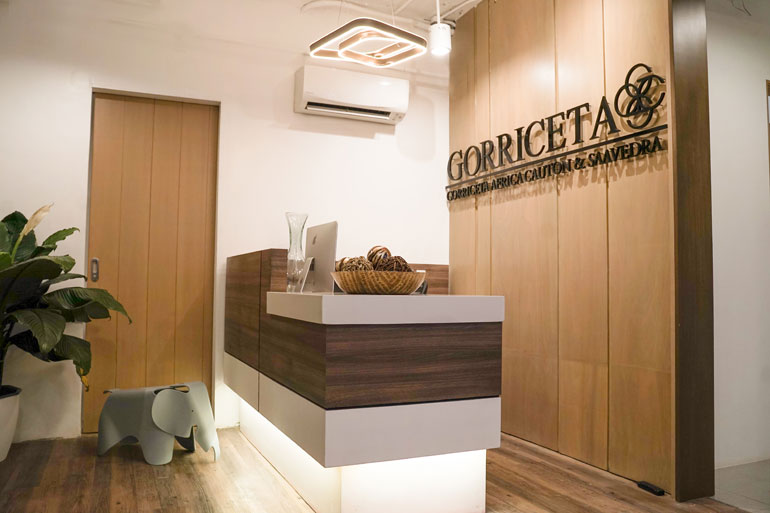 It usually takes decades to build a legacy in the Philippine legal industry — an industry that heavily depends on long-term client relationships, consistent exemplary services rendered, and leading expertise in the multitude of legal fields. And yet, defying odds, within seven years from its inception, Gorriceta Africa Cauton & Saavedra (Gorriceta) already propelled itself as among the top-tier full-service law firms in the country, moreso claiming undisputed leadership in a hotly contested field of law — Technology, Media, and Telecommunications (TMT).

“This has allowed the firm to build its initial set of clients and foster a culture of excellence amongst its founding team of lawyers,” Mr. Gorriceta told BusinessWorld in an e-mail.

Key to its fast-paced growth is its relentless and driven team of legal professionals which, as Atty. Gorriceta described, “on average, are young, tech-savvy, and agile in adopting and spearheading legal developments to meet innovations in the market” as led by its current nine partners, three junior partners, and seven counsels.

With TMT as its current legal centerpiece, Atty. Gorriceta’s open secret is the firm’s “heavy investment and expansion in TMT projects, by engaging both stakeholders: from regulators, to startups, to the general public in developing TMT as an instrument of public good.”

“We have built strong links with the TMT and FinTech space — whether globally or locally, private or governmental — in order to have firsthand knowledge of the new technologies that could be brought into or developed within the Philippine market,” Mr. Gorriceta explained. “In turn, [as we open ourselves to] discovering and/or familiarizing ourselves with such new technologies, we bridge regulators and private stakeholders into applicable Philippine laws and regulations that allow for the creation of entities or structures that can roll out these new products and services.”

This has been a winning formula, with heavyweights in the Philippine TMT space adorning its roster of clients, such as: UnionBank, UBX, Coins.PH, GCash, Kumu, Shopee, ShopeePay, Robinsons Group, Filinvest Group, Multisys Technologies, Angkas, and Foodpanda. It also holds an expansive list of up-and-coming startups and organizations that rely on the firm for Philippine legal and regulatory advice in the TMT/fintech space.

As part of its professional responsibility, Atty. Gorriceta continued, the firm also assists legislators and government regulators in developing and upgrading existing laws and regulations to meet the demand for innovative products and services that are potentially of great benefit to the public — such as the open finance ecosystem, the rise of blockchain-based technologies, and many others, thus acting as a key mediator at the crossroads of innovation and regulation.

“We have assisted traditional business clients in developing a tech and/or fintech arm to bridge their products and services into the growing digital economy. We have also facilitated several Securities and Exchange Commission (SEC) and Bangko Sentral ng Pilipinas (BSP) license applications that have enabled the expansion of much-needed financial services in the country, which in turn, propelled more business growth for our clients,” Atty. Gorriceta said.

Beyond its leadership in the TMT space, Gorriceta has also solidified its track record in equity market deals and closed notable mergers and acquisitions that continue to change the business landscape in the country. Its all-around legal services have also been heavily tried and tested during the pandemic, emerging triumphantly when the firm saw “an exponential increase in legal services rendered.”

Yet, with such an expansive reach and steady leadership, Gorriceta remains hungry for new opportunities.

“The firm is now looking to expand to energy law in order to assist the energy sector and the country with the ever-pressing demands for energy regulation, project development for renewable and non-renewable energy, electric generation and transmission, and various other environmental law concerns,” Atty. Gorriceta said. To realize this, it has further boosted the number of its legal professionals and invested heavily on further legal training and development, particularly in this new journey towards Energy Law.

While Gorriceta acknowledges that its legacy in the Philippine legal industry remains young and suspect to an unfathomable set of future challenges, it remains optimistic that these challenges can be met by a culture of perseverance, dedication to legal excellence, and a penchant for finding and developing the right lawyers that are driven to make a mark for themselves.

VOX POPULI | After three years of travel restrictions, where do Filipinos want to go now?