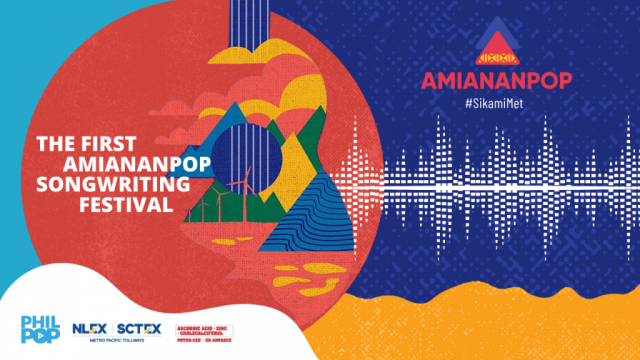 TO foster a better understanding of Northern Luzon culture and identity, AmiananPop Music, Inc. has launched a songwriting festival, the finals of which will take place online on Dec.  4.

Following in the footsteps of the Visayan Pop Music Festival (Vispop) and Mindanao Popular Music Festival (MinPop), the new AmiananPop Songwriting Festival 2021 puts a spotlight on musicians and songwriters from the Ilocos, Cordillera, and Cagayan regions, as well as non-Tagalog speaking areas in Central Luzon.

The songwriting festival is the first project of AmiananPop Music, Inc., a non-stock, non-profit organization.

“Amianan” is an Ilocano term which means “north.” Through AmiananPop Songwriting Festival 2021, artists from the North are encouraged to write, record, and produce songs in their own languages.

“Every language and/or dialect is unique, and so are the stories and nuances that come with it, and that is why this is the ultimate goal of the movement, to create a community of storytellers that will represent the ‘now’ generation of Northern singer/songwriters,” AmiananPop co-founder and chairman Davey Langit said in a statement.

The songwriting tilt uses the tagline Sikamimet!, which is an Ilocano for “It’s our turn.”

The competition is meant to bring modern regional pop music to the forefront of mainstream consciousness by making sure that the songs are well-produced and can compete on a global level.

“All the finalists have written and arranged songs, and the melodies are great. How do we bridge the gap? We make sure that the songs are well-produced, so that when people not familiar with the language hear them, they will be encouraged to look for the translation of all songs,” Ebe Dancel, pop rock musician (formerly the lead singer of the band Sugarfree), songwriter, and co-founder and president of AmiananPop said during the online press conference on Oct. 15.

From 58 submissions, the entries were narrowed to 10, who will be competing for the grand prize in December.

The selection of the finalists was made by Messrs. Langit and Dancel, along with foundation board members National Artist for Music Ryan Cayabyab, singer-songwriters Noel Cabangon and Gary Granada, Ma. Cristina Joy Balajadia, musical director Melvin Morallos, Christopher Donaal, and singer Agat Morallos.

The finalists were selected based on musicality, lyrics, creativity, and new sound. Mr. Langit, who is himself a singer-songwriter and instrumentalist, noted that the chosen songs have modern arrangements and strong melodies.

AmiananPop is also looking at digital platforms on which to release the songs.

“A songwriting competition is the best way to bring out these talents. Since we have this, this might encourage other songwriters… This is a good platform to have their music heard and encourage them to write more,” said Mr. Cabangon, who is a co-founder and board member of AmiananPop.

“Our dream is not just to make them available but hopefully promote them,” he said.

Maguindanao massacre ruling out by December 20