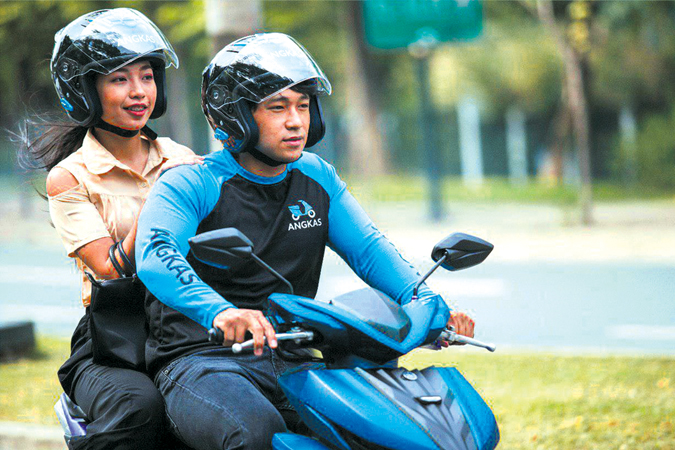 ALMOST TWO WEEKS have passed since the historic Senate hearing for the legalization of motorcycle taxis. In internet speak, that means four to five different news cycles; or in the old language, yesteryear’s news. But here’s why you should still care.

This affects us all, whether or not you use the service.

I fought for motorcycle taxis not because I ride one. I have done, of course, but I ended up getting my own Vespa instead when it started getting impossible to get an Angkas. So I basically privatized my way out of the problem. But that doesn’t mean the problem doesn’t exist. In fact, I know that deep in my heart, I’ve only added to it by introducing yet another motorized private vehicle to the road — especially when there was an option (and more importantly, a willingness) to share. And that is the most heartbreaking thing about this whole fiasco: We were told that we’re not allowed to share.

We all saw what happened when Uber left. Service quality plummeted, prices skyrocketed. New car sales skyrocketed. And the 50,000 to 60,000 cars that were once used for TNVS either went to their competitor or, worse, back to a private individual where one car services one family. You could call it a coincidence, of course, but the last two years since that fateful day have been the worst years on record for traffic but the best years for Grab. And now, we’re back in the exact same spot, talking about the exact same issue (just swapping four wheels for two) — proposing the exact same regulations, but hoping for a different result.

What our regulators need to understand is that you cannot regulate your way out of a crisis. It’s like trying to regulate hunger, pain or feelings. You need to go to the root cause. And the root cause of us riding motorcycle taxis is that there’s no better option out there. It’s that simple. So if you rob us of that, those who have the means will privatize their way out of the problem and create a bigger one by buying their own motorcycle, while those who can’t will just have to suffer — period. Think of coding; think of Uber leaving.

But don’t get me wrong. I’m not trying to totally disregard the concerns of the regulators here. They do have some points. It’s just that, if it’s really as dangerous as they say, why do we allow anyone to ride or sell a motorcycle in the first place? How exactly does it make it any less dangerous when you don’t charge your passenger for the ride? What kind of forcefield does it deactivate? Regulators will argue that it is because it is a common carrier and it comes with an increased responsibility; and we (meaning any road user born before yesterday) will just take one glance at a regulated jeepney, bus, taxi, tricycle and truck and say, “Sige, kami na lang maga-adjust (okay, we’ll adjust).”

Also, think of the message a ban sends to innovators, especially at a time when we should be turning to tech as a weapon against traffic. We are basically telling them: Your ideas are NOT welcome here. I mean, who knows what the next big thing will be? If none of us saw Uber coming, or Netflix, Spotify, Viber, online banking, etc., who is to say that the next great app to disrupt or revolutionize the buses, jeepneys or tricycles is not at the tip of some developer’s keyboard? But because we created such an inhospitable (dare I say hostile) environment for them, they will either not develop it or take it somewhere else.

I said in my Senate speech that change is the only way out of this mess. That’s still true; We can’t do it without change, but there’s also one other way. We can also share our way out of it. It’s our only hope. Because try and imagine a world without shared resources. We would literally have to generate our own individual electricity and fetch our own water from our own private well. A shared economy, plus our ability to cooperate in large numbers and turn our thoughts into things, has seen Sapiens evolve from one of the most vulnerable species in the animal kingdom to the most dominant one. It’s time we use it against our new predators, like traffic.

It’s 2020, for crying out loud. When I was a kid, I thought we would be in flying cars by now. Instead, here we are going backwards. We love to talk about progress but we chain ourselves to the past with a public service act that was written in 1936. We now live in an exponential era, and we need laws that can keep up.

The good news here is that there is a piece of legislation that is being drafted by Senator Grace Poe as we speak. Now I know what some of you are thinking, but for whatever criticism I have seen about Senator Poe, she understands this issue. The mere fact that she still remains the only one to give the riding public a voice here speaks volumes, and has earned her my full support. But it needs a lot more than that. It needs you.

But I hate motorcycle riders. They are so unruly and are a menace on the road.

I hear you. I too have had my vehicle scratched by a careless motorcycle rider before. I’ve also had my car scratched by an unruly jeepney driver and got rear-ended by a bus that ran out of brakes. The point here is, kamotes (as they have come to be known) come in all shapes and sizes. They are not exclusive to two wheels. In fact, they get exponentially worse as they increase to four, 10, 18, etc. The problem is not the vehicle type but the nut behind the wheel. That is what you need to fix, and that is done at the LTO level with stricter licensing and driver education and enforcement. Let’s not confuse the issue.

In fact, if anything, creating a space and a legal framework for these motorcycle taxis will allow for mandatory training at a level that is on par with the rest of the world. That’s if we demand it, of course; which we can, so long as we start now. Because every day that we procrastinate, the habal-habal community grows, and so will the number of private motorcyclists that will have just privatized their way out of the problem and will no longer be answerable to anyone.

It will only be a matter of time before we will totally lose control of this and the animals take over the zoo, so to speak.