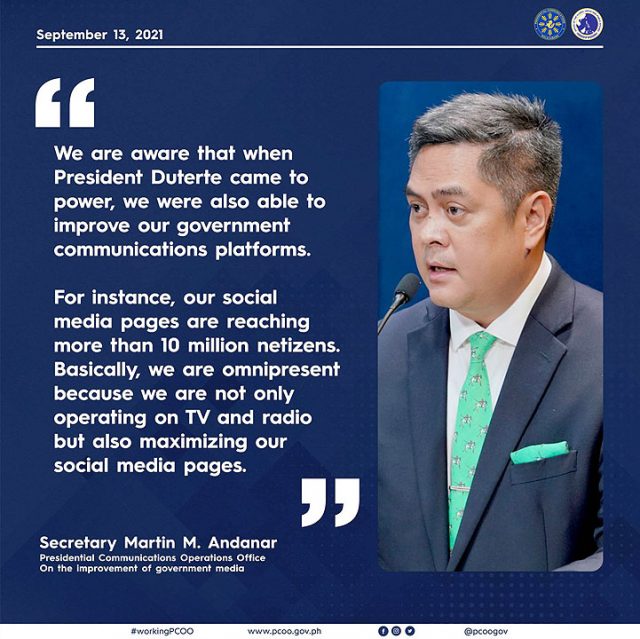 THE SENATE has asked the Palace communications unit to submit details on the functions of over 1,400 contractual workers with a proposed budget of P76 million for 2022.

The Presidential Communications Operations Office (PCOO) said at the budget hearing Thursday that it currently has 1,479 contractual hires.

Twelve senators had previously filed a resolution seeking an investigation into allegations that the PCOO uses government funds to run so-called “troll farms” with personnel tagged as “social media specialists.”

“We don’t have trolls. There are no trolls there,” said Undersecretary Kristian R. Ablan at the hearing.

“You are asking for the appropriation of public funds. We have the right to know how you use these public funds,” said Minority Leader Franklin M. Drilon at the hearing.

“Part of our right to know is to make sure that these are not fictitious names, that the names are performing their jobs. Even if they are trolls we will accept them, as long as they are legitimate and existing,” he added.

Senator María Imelda Josefa “Imee” R. Marcos noted that the PCOO had no policy guidelines for hiring the workers. “Your contracts of work are very random. They don’t appear to have any semblance of uniformity or even the requisite Civil Service Commission Regional approval.”

“We know that you’ll never admit that you have a budget for trolls,” said Mr. Drilon, adding that senators will just examine the information themselves.

The Commission on Audit, in its 2020 report, questioned PCOO’s basis for hiring 375 contractual workers without written policy guidelines on availing their services. These workers comprised 71.7% of the total PCOO manpower.

Angara tells PhilHealth to settle all obligations, gear up for higher 2022 fund for universal health...

Comelec willing to hold a week’s extension of voter registration