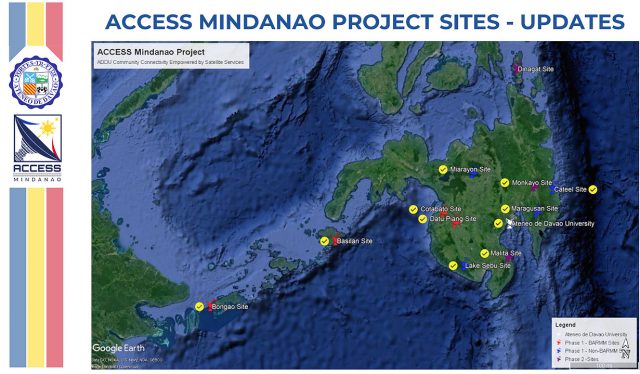 THE PANDEMIC highlighted digital connectivity as a need and not a want, on par with basics like food, water and electricity.

“That was the time when we shifted towards online, online everything,”

He took on that post in March 2020, the same month that the Philippines started implementing restrictions to mitigate coronavirus transmission, including the abandonment of face-to-face classes.

By June that year, AdDU was one of the first academic institutions in the country ready to go fully online with its academic programs.

“Our infrastructure, our system was prepared (to) easily shift towards online education,” he said.

“However, we looked at it also as an issue that we might have a good level of connectivity here in the campus, but the same cannot be said for our students in their homes, in their provinces; some are even from outside Mindanao.”

The Jesuit-run school launched a program providing WiFi access and soft loans to buy devices to students who needed assistance. But even with the tools available, getting online at stable and minimum speeds was a more fundamental problem in many areas.

The university’s leadership also knew that telecommunication companies could not possibly expand the country’s cable and cellular mobile networks in the time required.

“Despite the notable progress in the country’s overall internet performance, the Philippines lags behind its peers in terms of affordability, availability and speed of internet access,” states the plan prepared by the Department of Information and Communications Technology (DICT), then just a year old as an agency headed by a Cabinet-level minister.

It cites several international reports — including from the World Economic Forum and the International Telecommunication Union, as well as the Global Information Technology Report, among others — pointing to the country’s low ranking in terms of internet services.

The 2019 National ICT Household Survey, the first national baseline report conducted by the DICT and the Philippine Statistical Research and Training Institute, indicates that only about 50% of communities have telecommunication operators in their area, only 30% of the country’s more than 42,000 barangays have fiber-optic cables installed, only about 13% have free public WiFi in their communities, and only 15.7% of households have internet access.

These percentages are even lower in Mindanao, more so in the Bangsamoro provinces where, for example, the number of households with internet access was only 5.1%.

ACCESS MINDANAO
Mr. Sese, one of the country’s three astrophysicists and the former focal person of the Philippine Space Science Education Program, knew of a solution in his line of expertise that could immediately address the digital gap.

“I told Father Joel (E. Tabora, AdDU president), that it’s very easy. Instead of waiting for the telcos to lay the groundwork, the infrastructure, we utilize the technology that’s available, and has been available for almost 60 years, and that’s using satellites.”

Launched in October 2020, the program that aims to establish a network of schools, hospitals, businesses, and communities that are linked to the internet through satellites now has 11 sites across Mindanao. The 12th — to be located in the island province of Dinagat — is set for installation in September.

Most of the locations are far-flung such as Tawi-Tawi, the country’s southernmost islands; or secluded like Barangay Demoloc in Malita, Davao Occidental; or are best with peace and security challenges.

Several others, which now form part of the project’s second phase, have been lined up in partnership with the Ateneo de Davao Academy of Life-Long Learning and the Commission on Higher Education for areas in Maguindanao, and local governments that put forward requests.

Ownership of the small-aperture antennas is immediately turned over to the beneficiary community, along with training on their maintenance and operation. Subscriptions to satellite services are partly subsidized by the ACCESS Mindanao program for a year.

Mr. Sese said it costs an average of P350,000 to set up each site, including equipment, training, and logistics.

The project’s ultimate goal is to see the launch of a national telecommunications satellite that will cover the whole archipelago, providing access to distance education, telemedicine, financial technology, e-commerce, government services, and disaster management and response.

“We’re not saying that this is something that can replace fiber optic or ground-based infrastructure,” Mr. Sese said. “We see it more as a complementary technology that can provide connectivity to the last-mile locations… and in any system, we always want redundancy… something to back it up (the ground network) as well.”

ON THE GROUND
The country’s major telecommunication providers are currently focused on their respective cable network expansions, but do recognize the potential role of satellite technology in achieving a truly inclusive digital Philippines.

They welcomed Executive Order 127, issued in March this year, that liberalized access to satellite technology for internet services.

“We believe that liberalizing access to satellite services will pave the way for a more robust digital infrastructure for the country and achieve our shared dream of nationwide connectivity,” said Converge ICT Solutions, Inc. Chief Executive Officer Dennis Anthony Uy in an e-mail interview.

He added that the company is also open to “the possibility of harnessing satellite technology” in “some areas unreachable by fixed broadband,” citing mining locations and island resorts among the potential markets.

Globe Telecom, Inc.’s Emmanuel Estrada, senior vice-president for Technology Strategy & Service Integration, said the company has been using satellite “as backhaul for its remote rural cell sites as well as (to provide) connectivity for some enterprise customers in remote locations.”

And it welcomes the opening of satellite access to other internet service providers saying, “it is very timely in the light of new satellite technologies and the need to provide inclusive connectivity to still unconnected areas in the country as it continues its journey towards the new digital economy.”

PLDT, Inc., the oldest of the big providers, now has its business strategy centered on “wired or wireless” networks “as these provide better quality (lower latency) and more affordable prices.”

“We used to have investments in three satellite companies because in the past, we used satellites to provide service. Owing, however, to the increasing demand for better-quality of service and at more affordable prices, we have slowly shifted clients using our satellite-based services into wired or wireless,” PLDT said in a statement.

The ACCESS Mindanao communities are currently using their new connectivity mainly for education — distance learning and teacher training programs, and health services. The Miarayon site, an upland community in Bukidnon, is looking into how farmers can tap the service for online market linkages.

Mr. Sese, who played a key role in the drafting and passage of Republic Act 11363 or the Philippine Space Act 2019, stressed that space technology such as satellites is “something that is not far off from our day-to-day lives.”

There are currently at least 15 telecommunications satellites with footprints in the Philippines, all foreign-owned.

He is hopeful that through a public-private partnership, the country will again have its own satellite that will initially require between P6 to P10 billion in investment.

“It makes sense for a country such as the Philippines where you have more than 7,600 islands to have one satellite that can connect everyone, no matter how isolated you are,” he said.

He drives home the point by quoting the National Space Act, “The Philippines will focus on space applications that can preserve and enhance the country’s national security and promote development that is beneficial to all Filipinos.”

Hastings Holdings, Inc., a unit of PLDT Beneficial Trust Fund subsidiary MediaQuest Holdings, Inc., has a majority stake in BusinessWorld through the Philippine Star Group, which it controls.

From survival to growth: The BusinessWorld pandemic story

Trying to get a read on the unpredictable post-pandemic economy