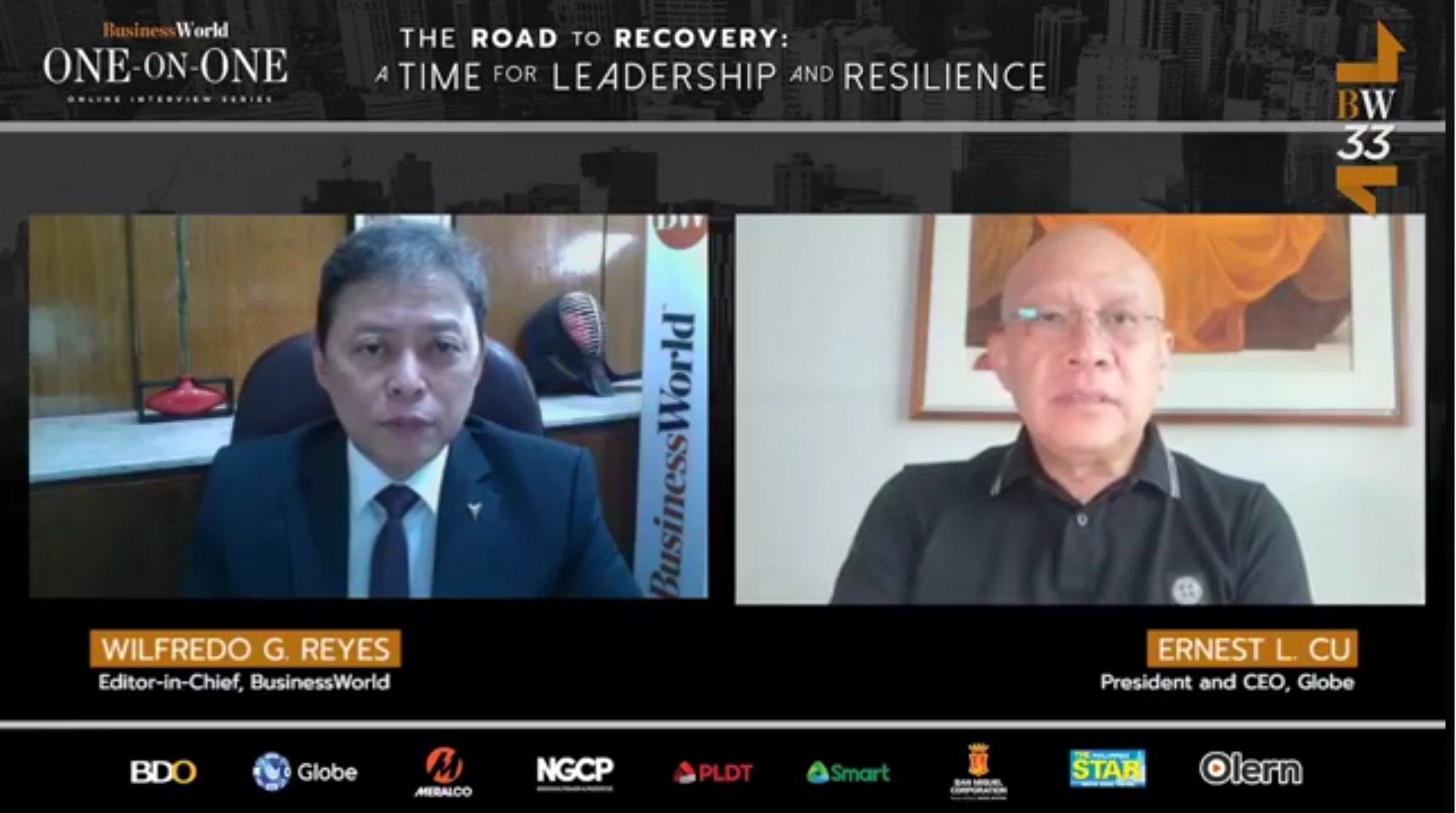 The need for connectivity and digitalization has never been more evident in 2020. The coronavirus disease 2019 (COVID-19) outbreak forced the world to reconsider the traditional meaning of business and work, and industry leaders and experts have spent months struggling to redefine and reset their expectations for the future.

In the Philippines, as one of the most recognized companies, Globe Telecom has pushed its way to the forefront of the pandemic, as it served to address the increased demand for faster connectivity during the COVID-19 crisis.

“Telcos, by their own nature, are very resilient companies, particularly in the Philippines,” Globe President and Chief Executive Officer Ernest L. Cu told BusinessWorld Editor-in-Chief Wilfredo G. Reyes during the fifth session of BusinessWorld One-on-One exclusive online interview series. “We get hit with earthquakes, volcanic eruptions, we get hit by typhoons, and so we’re used to recovering from these types of disasters.”

“However, the pandemic itself is new for us. COVID-19 hit the whole Philippines, it’s not something that we were actually ready for or anticipated. But the many years of rehearsing and simulating disasters helped put us in good stead.”

Naturally, he noted, the company was still affected by the situation, with about 35% critical skeletal workforce being able to go out and handle the essential task of keeping Globe’s network running without disruption. Like many companies, Globe then adopted a work-from-home arrangement to continue operating 100% as normal, with much of its focus shifting towards the strengthening of the company’s digital services.

“Globe was very, very effective working from home. We’ve prepared over the years quite well in our digitization process inside Globe. For instance, almost all of our ID systems are virtualized and on the cloud, both private and public,” Mr. Cu said.

He also pointed out that Globe’s various groups have been doing major system upgrades throughout the pandemic. GCash, the company’s e-money service, went through a major platform migration when they moved 25 million accounts to a new platform while Globe’s billing team moved many services to a brand new billing system for the broadband service.

As COVID-19 forces more of the country towards accelerating its digital transformation, Mr. Cu said that Globe is ready to contribute.

“Obviously, the digitization across all fronts is a critical thing for us. People’s habits have changed. People don’t want to go out. GCash has seen exponential growth since the beginning of the pandemic. It has now become mainstream, that people of all ages are using the service now as a mode of payment, a mode of savings, a way to transact with each other,” he said.

He also added that the company is open to partnerships with local government units and schools to empower vulnerable communities during the crisis, especially students who are in need of reliable and affordable internet to continue their education.

For instance, Globe is currently working with the City of Manila to create the “Batang Maynila” program, which provides internet connectivity to student residents of Manila at an extremely affordable rate.

“We provided a very, very aggressive rate for them, almost a subsidized rate, to enable learning across their whole city. We continue to look for opportunities to help the different cities. Obviously, it’s impossible for us telcos to provide the service completely for free or as a donation, but we are very open to continuing to explore other ways to help,” Mr. Cu said.

Adapting to a change in plans

Entering the year, Globe did not anticipate the extent of the impact of COVID-19, nor how much the company quickly adapted to the crisis. In fact, the company had announced prior to 2020 that it had plans to roll out a massive $1.2-billion expansion to its infrastructure, improving and establishing cell sites across the country.

“We had an ambitious plan coming off a very successful year of rollouts in 2019,” Mr. Cu recalled. “I do think that we will probably not make the $1.2 billion in spend that we have anticipated. However, we will try our best to make it up towards the end of the year and see how far we get.”

The impact to the company’s expansion plans hit harder as mobile data usage saw a surge nationwide after the lockdowns were imposed. Mr. Cu said that in terms of usage patterns, mobile data saw a surge of 20%-30% when the pandemic hit, while the volume of home broadband users more than doubled. However, Mr. Cu is confident that Globe is more than capable of handling the demands of the crisis.

“The building continues and so far the network has been resilient. The speeds experienced by the network are now even ahead of the average speeds that were pre-pandemic, because of the new builds. And we strive to build more and more sites, have more capacity to improve the customer experience on both the mobile and the home network,” he said.

“From an operating point of view, I think we’ve conditioned ourselves to believe that this will go on for a while, and in the absence of a vaccine that will be widely distributed, the dangers and the risks will remain. And so we have to make this the new normal.”

This interview is part of BusinessWorld’s 33rd multimedia anniversary report, the BusinessWorld One-on-One Interview, an exclusive online interview series that sits down with the country’s most prominent executives and luminaries to discuss the ongoing crisis, along the theme “The Road to Recovery: A Time for Leadership and Resilience.”