MONEY SENT HOME by migrant Filipino workers jumped by 12.7% in April, the fastest since November 2016 and reflecting the global economic recovery amid a coronavirus pandemic, according to the Philippine central bank.

Cash remittances rose to $2.305 billion in April from $2.046 billion a year earlier, the Bangko Sentral ng Pilipinas (BSP) said in a statement posted on its website on Tuesday.

The central bank expects cash remittances to grow by 4% this year after falling by 0.8% last year, when many countries were locked down amid the health crisis. These inflows are crucial to consumption, which makes up 70% of the Philippine economy.

The April growth was the fastest since November 2016, when cash remittances grew by 18.5%.

The remittance growth in April came from a low base in April last year, when cash remittances fell by 16.2% as migrant workers lost their jobs amid a coronavirus lockdown in many countries, said Ruben Carlo O. Asuncion, chief economist at UnionBank of the Philippines, Inc.

Remittance inflows shrank from March to May and in August and December last year, with many Filipinos coming home after losing their jobs overseas.

Mr. Asuncion said higher remittances in April showed better economic prospects in host economies. Major remittance sources such as the US have seen signs of economic recovery, while Saudi Arabia was benefiting from rising global oil prices, he added.

Inflows from land-based overseas Filipino workers (OFW) rose by 15.2% to $1.779 billion, while remittances from Filipino seamen increased by 4.9% to $526 million, BSP data showed.

The US continued to be the top source of remittances in January to April, followed by Singapore, Saudi Arabia, Japan, the United Kingdom, United Arab Emirates, Canada, South Korea, Qatar and Taiwan. These economies accounted for 78.1% of total cash remittances.

Meanwhile, April personal remittances, which include inflows in kind, rose by 13.1% to $2.574 billion from a year earlier.

Mr. Asuncion said he expects inflows to grow by 4-6% for the rest of the year. “Remittances together with business process outsourcing revenues could be our saving grace this year.” — Luz Wendy T. Noble 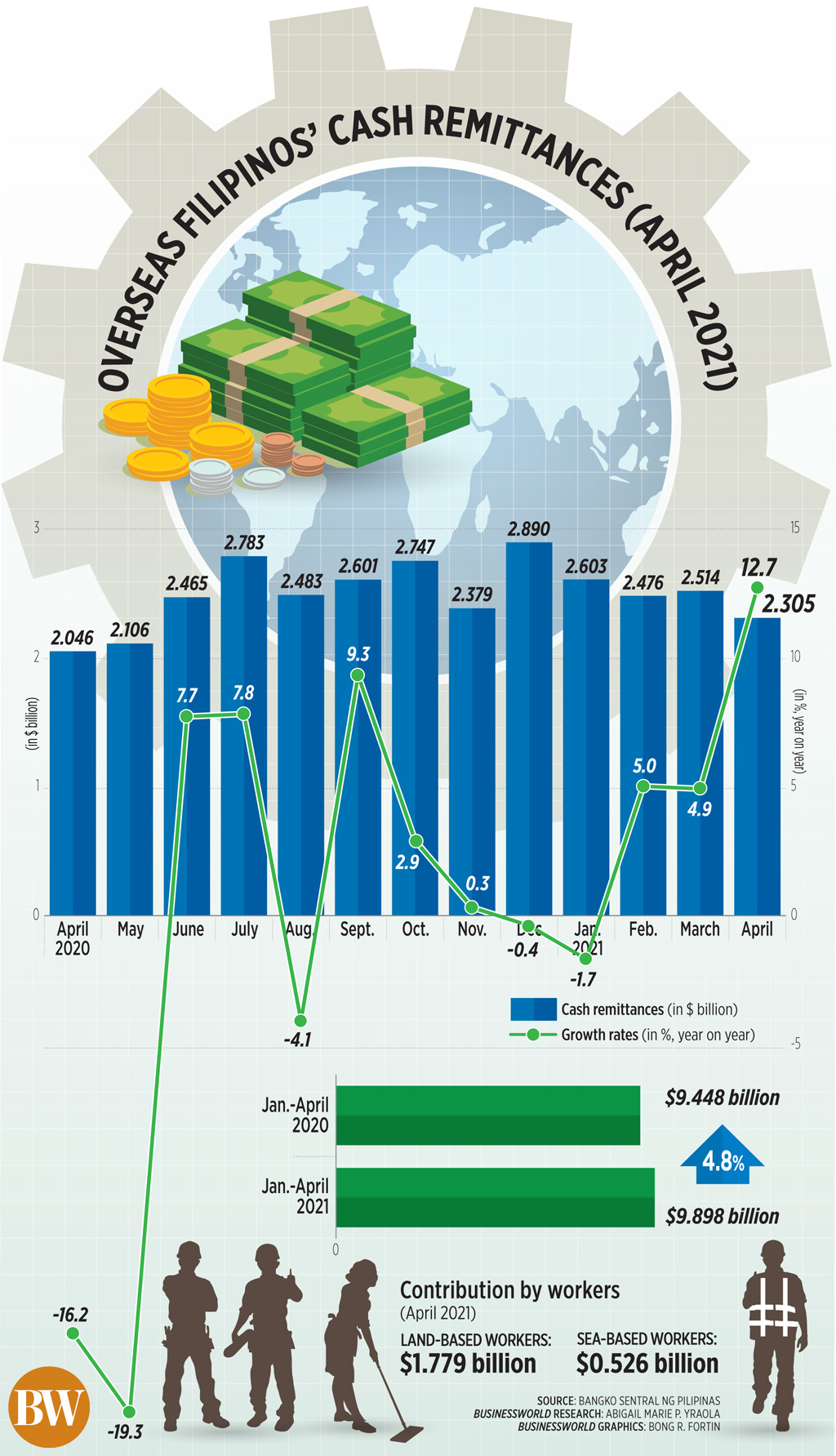 Remittances seen to fall up to 10%