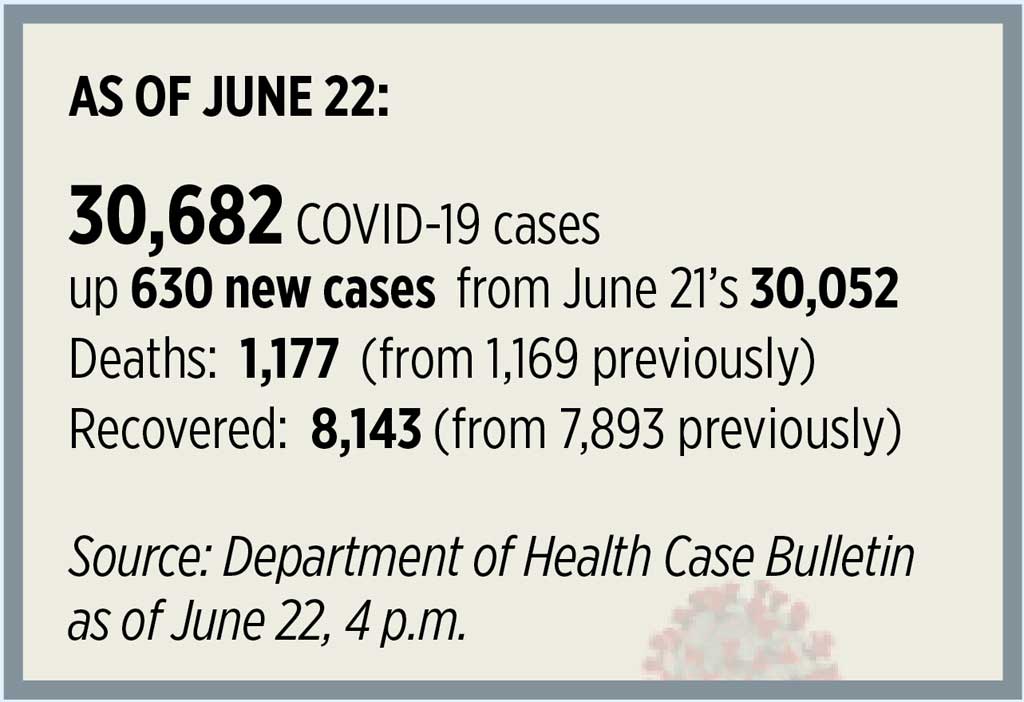 A CEREMONIAL reopening of tourism establishments in Panglao was held June 22, but the local government has yet to give clearance for the resumption of flights at the Bohol-Panglao International Airport.

Bohol is being eyed by the national government as a model site for the relaunching of the tourism industry amid the continued threat of the coronavirus disease 2019 (COVID-19).

Panglao, an island off the Bohol mainland, has no COVID-19 active cases as of June 21 data from the provincial government.

The entire Bohol province currently has 17 active cases, all of whom are returning residents or overseas Filipino workers (OFWs) who have been under isolation since arrival.

Mr. Yap said while the local government’s long-term goal is to boost agriculture as the main economic driver of the province, tourism will remain an important livelihood source.

“In Bohol, our income is driven by two things — OFW and tourism. The third to a lesser degree, which we hope to correct in the coming year is the income we are deriving from agriculture, which we hope to bring up,” he said in his speech during the ceremony.

He said the lockdown in the past three months and the COVID-19 crisis in general gave the province time and space “to think about what we gave importance to in tourism” and how they can do things better in terms of environmental protection.

Also during the event, the new Panglao Tourism Office was launched, located near the docking area for water tourism transport facilities, where a “One Entry and One Exit Policy” will be enforced. — Marifi S. Jara

THE DEPARTMENT of Transportation (DoTr) has given assurance that the delayed Mindanao railways project will be rolled out despite a recommendation from Davao City Mayor Sara Duterte-Carpio to remove the project from the government’s priority list for now.

“De-prioritization does not mean cancellation. The project will continue. I believe the Office of Mayor Sara Duterte already received our letter,” Transportation Assistant Secretary Eymard D. Eje, who handles the Mindanao cluster project implementation and special concerns, said in a Viber message.

The National Economic and Development Authority’s (NEDA) Davao Region office, in a statement, confirmed the position paper that cited several concerns: unresolved alignment issues between the railway and other priority projects such as the Davao City Bypass Road; still unsigned loan agreement between the Philippines and China, which will fund the project through an official development assistance loan; and potential insufficient ridership to cover operating costs.

The infrastructure committee has endorsed the paper to the Regional Development Council (RDC) for further deliberation.

Mr. Eje, on the other hand, said they have already addressed the issues raised by the Davao mayor in a letter.

He explained that the alignment issue between the railway and the bypass can be resolved as the road design is flexible enough to adjust to the train’s path.

The government last week signed an P18.5 billion loan agreement with Japan for the supplemental financing of the second phase of the bypass construction.

The loan with China for the railway, Mr. Eje said, is expected to be signed “soon.”

The transport official also noted that the government will acquire a 40-meter wide right-of-way along the train line as reserve area for possible expansion into a dual-track system in the future.

He also noted that the DoTr pushed for the dual-track, electric train as recommended by the RDC, but the NEDA Board made the final decision to initially construct a single-track, diesel-fueled system.

Mr. Eje said the feasibility study for the first phase of the Mindanao Railway Project (MRP) indicates that the train system will have enough patronage to support operations.

The MRP, with an estimated cost of P82.9-billion for the 102-kilometer first segment, is among the first priority projects listed under the Build, Build, Build program of the administration of President Rodrigo R. Duterte, father of the Davao mayor. — Maya M. Padillo

BAGUIO CITY has been named pilot area for the urban agriculture project of the Department of Agriculture (DA), intended to contribute to food security in urban areas across the country amid the coronavirus disease 2019 (COVID-19) pandemic.

Agriculture Secretary William D. Dar and Baguio City Mayor Benjamin B. Magalong signed a memorandum of understanding on June 19 for the city’s implementation of the urban agriculture initiative under the DA’s Plant, Plant, Plant program.

Under the agreement, the regional and local offices of the DA and its attached agencies will provide crop and poultry inputs while the city government will identify the farm sites and designate an urban agriculture project focal person.

The Baguio government will also endorse the program to the private sector for possible participation.

“By adopting Baguio City for the urban agriculture project, it is hoped that agricultural tourism could be developed in the city to further promote the importance of agriculture and to urge its people to engage into urban gardening,” the DA said.

The agreement between the DA and the Baguio City government came after the House of Representatives committees on agriculture and food, and food security passed a bill on June 17 that seeks to institutionalize community gardens and urban farming for additional sources of food.

AS THE number of coronavirus cases continues to spike in Cebu City, the national government is sending a team to evaluate and assist in curbing the outbreak, said Palace Spokesperson Harry L. Roque.

In a briefing on Monday, Mr. Roque said the National Task Force (NTF) is giving closer attention to Cebu City, where there are now more than 4,000 positive cases of the coronavirus disease 2019 (COVID-19)

Mr. Roque said the NTF will hold a week-long evaluation of the “ground level response” of the local government starting Monday. A “special Visayas Deputy Implementer” will also be appointed along with the establishment of an operation center in the city.

Cebu City is currently the only area in the country placed under the strictest quarantine policy.

It’s neighboring Talisay City was initially placed under a similar protocol, but the provincial and municipal governments’ appeal for a less stringent category has been approved by the national government. — Gillian M. Cortez

MORE THAN 3,000 buses and 1,500 jeepneys were deployed Monday in the National Capital Region under the second phase of the government’s transportation revival plan, according to the Metro Manila Development Authority (MMDA).

In the first phase last week, only 1,500 buses were given authority to operate in the capital where most businesses were already allowed to reopen, which left thousands of workers faced with commuting strains.

In briefing Monday, MMDA Spokesperson Celine A. Pialago said adjustments were made on the routes for public transportation, trimming it to 31 from 96.

“Old jeepney routes will instead be used as city bus routes,” she said.

The Land Transportation Franchising and Regulatory Board (LTFRB) said last Sunday that an initial 15 jeepney routes will be opened on June 22. An additional nine will be launched on the 24th, and another 10 on the 26th.

The old jeepneys have yet to be allowed to resume operations. — Gillian M. Cortez