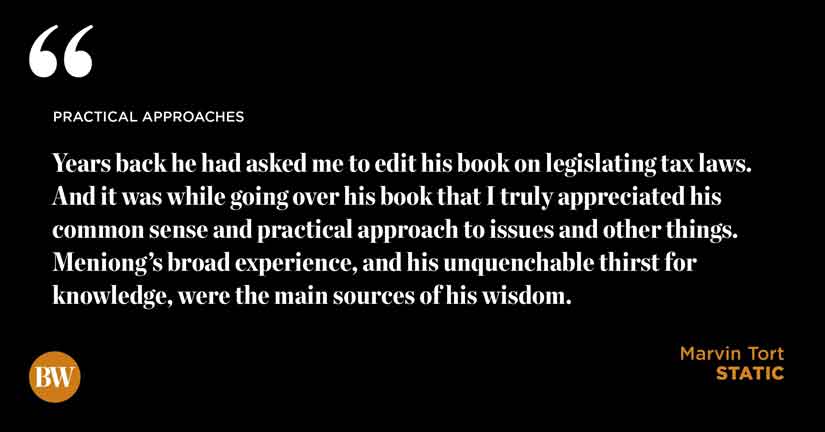 My friend Meniong, the late Negros Oriental governor and congressman Herminio G. Teves, would have been 100 years old on April 25. But it was not his fate to reach that milestone. It has been almost a year since he passed on last May 15, just 20 days after he celebrated his 99th birthday. It is in crucial times like now that I truly miss his practicality and old-age wisdom.

But Meniong’s advantage over all his kin, and the source of his down-to-earth wisdom, was his life experience. He was around for a long time: born in the American period and prior to the Commonwealth era and the 1935 Constitution; he survived the Second World War in 1941-1945; saw the Republic gain independence in 1946; lived through Martial Law that started in 1972; and witnessed the 1986 EDSA revolt and the restoration of democracy in the country.

In terms of Economics, he went through the period of US parity; import substitution; Filipino-first; retail trade nationalization; the transition from agriculture to manufacturing and industries; and all the ups-and-downs and boom-and-bust cycles of the Philippine economy from 1920 until 2019. Rarely can we find individuals like him who were actively involved in both the country’s politics and economics for about 70 years of his life. This is a distinction usually enjoyed by institutions, not by individuals. But Meniong had that privilege.

He had a front row seat to the Philippine experience for almost 10 decades, being part or witness to many of the milestones in the country’s political and economic history. And, if Meniong was still alive today, he would probably say that while COVID-19 will knock us out not just once but perhaps many times over the coming years, the Filipino people will survive, like it has survived everything else that has come its way since Spanish ships found their way to our shores in the 1500s.

What I remember most about Meniong was his practicality, or his knack for “simple” solutions even to the most complex situations. In years that I had known him, he was always very down-to-earth, very folksy, and quick to offer a smile and a very firm handshake. And then there was his common sense way of dealing with things. He was a veteran of life, and it was the way he did things, the way he went about them, that I admired the most about him.

And it was his distinct or particular way of thinking that allowed him to successfully steer the Committee on Ways and Means at the House of Representatives as its chairman for a number of years. Ways and Means, of course, covered taxation and how the government could raise revenues to finance its operations, projects, and programs.

Meniong wasn’t an economist. His “economic” training came from his decades of experience in running his own enterprises. His educational background actually involved shipping. He went to the Philippine Nautical School and graduated at the top of his class in 1941 with a degree in maritime transportation. He was a deck officer on an inter-island ship when the war came to Philippine shores in December 1941.

During the war, given his maritime training, he helped out on a number of US vessels. He helped ferry military equipment and soldiers all around as part of the merchant marine fleet. That is, until a Japanese bomber sunk their ship. After the war, he was head instructor at Cebu Nautical School. He later joined Iloilo Negros Shipping Company’s Cebu City operations, and was its manager from 1947 to 1951.

I guess there is something about being a mariner, a seafarer, that helped keep him steady even in rough waters. Perhaps it is the experience of venturing out; of living in the high seas for days on end with limited supplies, unpredictable weather conditions, and the distinct possibility of not ever making it back to port for their families. Survival relies mainly on one’s own wits and abilities to weather even the worst conditions.

Meniong was already 49 years old when he first joined the pre-Martial Law congress. He was 65 when he became governor in 1986. He was 78 when he started his second stint in Congress in 1998, but he still managed to work for three terms or nine years. He was 87 when he “retired” from Congress, and renewed his focus on his businesses. At 91, he was still playing some golf and looking for new business ventures.

Years back he had asked me to edit his book on legislating tax laws. And it was while going over his book that I truly appreciated his common sense and practical approach to issues and other things. Meniong’s broad experience, and his unquenchable thirst for knowledge, were the main sources of his wisdom.

I recall a number of situations in the past, and his simple solutions to them. Like in the case of school delinquency and malnutrition in his district. He noted that many children skipped school to help their parents in the fields so that the family can earn and buy food. He resolved to fund school feeding programs where children would get to eat as long as they’d go to school. And, he made sure the school meals were fortified with milk and vegetables like malunggay.

And then there was the concern that many motels were allegedly under-reporting revenues, and tax payments. He suggested putting discreet “inspectors” at motel entrances tasked to simply count the number of cars or taxis coming in and getting rooms. This way, authorities could estimate or approximate the motels’ revenues, and their taxes due.

There was also a time when the US government was extending agricultural commodities grants to the Philippines. He quipped that by doing so, the US was actually saving money from having to just warehouse and store all their surplus farm products. By giving them to countries like the Philippines, even at subsidized rates, the US would get a better return.

It was his simple way of looking at things, and understanding their implications, that I miss particularly in this COVID-19 situation. I am sure he would have had some simple but effective approaches to providing particularly for the poor during quarantine or lockdown. And perhaps he would have also supported the move to temporarily raise tariffs on oil and fuel products to help raise more revenues for COVID-related interventions.

One suggestion recently came out from researchers in Norway regarding the reopening of public schools at intervals. Reading the proposal, as reported by The New York Times, I could not help but remember Meniong, for it was the type of practical suggestion that he could have supported as well.

Norwegian medical researchers suggested opening one school for two weeks with half the usual number of people and six-foot physical distancing. All students and teachers will be tested for COVID-19 before opening and after two weeks. If transmission didn’t increase in the reopened school after two weeks, then the trial would be repeated with more students and less distance each time.

This can be tedious, I know. It will also require focus and determination to get done, not to mention resources and a lot of patience from both authorities and the public. But the Norwegian suggestion is the kind of practical approach that can be considered to deal with our present situation.

It is not highly technical or high-technology driven. The main requirement is the availability of tests. And, of course, the support of people for a staggered school reopening, at two-week intervals. With this, over time, some semblance of regularity can be achieved. As like with all things, COVID too shall pass. It may take months, or years.

But it will pass, and life will go on.

Marvin Tort is a former managing editor of Businessworld, and a former chairman of the Philippines Press Council