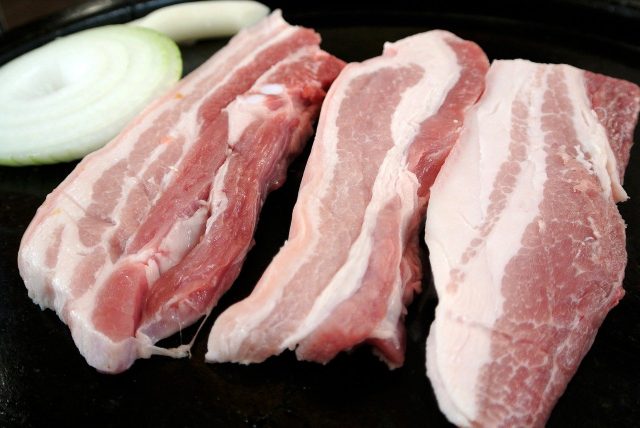 PRESIDENT Rodrigo R. Duterte’s decision to lower the tariffs on pork imports will not only deal severe damage to the hog industry competing with the imports, but also deprive the government of much-needed revenue, Senator Panfilo M. Lacson said.

“On behalf of the hog raisers, we urgently appeal to the President to reconsider and recall such executive order (EO),” Mr. Lacson said in his opening statement during the Senate Committee of the Whole hearing Monday.

He said the government will lose P3.6 billion because of the lower tariffs.

On April 7, Mr. Duterte issued EO 128, which lowered the tariffs on pork imports. Tariffs were ordered lowered for pork imports within the minimum access volume (MAV) quota to 5% for the first three months, increasing to 10% in the subsequent nine months.

Meanwhile, out-of-quota pork imports will pay 15% in the first three months. This rate rises to 20% in the succeeding nine months.

Before the EO, pork imports within the MAV quota were charged 30%, with those outside the quota paying 40%.

MAV is the scheme allowing for the import of specific volumes of agricultural commodities at lower tariffs under the World Trade Organization system.

During the Senate committee hearing Monday, Agriculture Secretary William D. Dar maintained that the pork supply faces a deficit of 388,563 metric tons (MT). He said that for the year, estimated demand is 1.60 million MT, while supply is 1.22 million MT.

“The country’s pork supply is already thin. The number of people engaged in hog raising is low and that is why we need to put up a whole-of-nation approach to solve the issues in the hog industry,” Mr. Dar said.

Asked when the lowering of tariff imports will reflect in lower retail prices of pork, Mr. Dar said the effect may be felt in 40 to 60 days.

“I understand that the entry of imported pork takes 40 to 60 days,” Mr. Dar said.

At the Senate Committee hearing, calls emerged for wider consultation on the tariff reduction after Customs Commissioner Rey Leonardo B. Guerrero said his bureau was not consulted about the decision to lower pork tariffs.

Senator Francis N. Pangilinan said the Bureau of Customs should have been consulted since the lowering of pork tariffs will affect government revenue.

“This begs the question that one of the largest revenue generating government agencies not being consulted in a matter of reducing our revenue. That is a policy question. It is very basic that every time we decide to reduce revenue, there should be consultation,” Mr. Pangilinan said.

Mr. Duterte recommended that Congress increase the MAV allocation to 350,000 MT, which will be added to the current 54,210 MT, in order to expand the pork supply.

During the hearing, Bureau of Animal Industry Director Reildrin G. Morales also disclosed that the retail price of imported pork belly (liempo) with the 5% tariff rate will be P275 per kilogram, rising to P295 when charged the 15% tariff. Both will be cheaper than the P350 per kilogram price resulting from 40% tariffs.

Mr. Dar said on April 7 that there will be no extension in the effectivity of EO 124, which placed price caps on pork and chicken products. Regulators will instead set a suggested retail price (SRP) for imported pork.

Mr. Dar said the SRP for imported pork shoulder (kasim) will be P270 per kilogram, while that for pork liempo is at P350 per kilogram.