The Philippines ranked first for non-fungible token (NFT) ownership out of 20 countries, with 32% of Filipino internet users saying that they own NFTs, according to an online survey released this November by Australian independent information service Finder.

Globally, just 1.7% of internet users owned NFTs. Meanwhile, of the 1,507 Filipinos surveyed, nearly three times of the global average were NFT owners, the platform said, adding that NFT adoption in the Philippines could soon hit 41.5%. 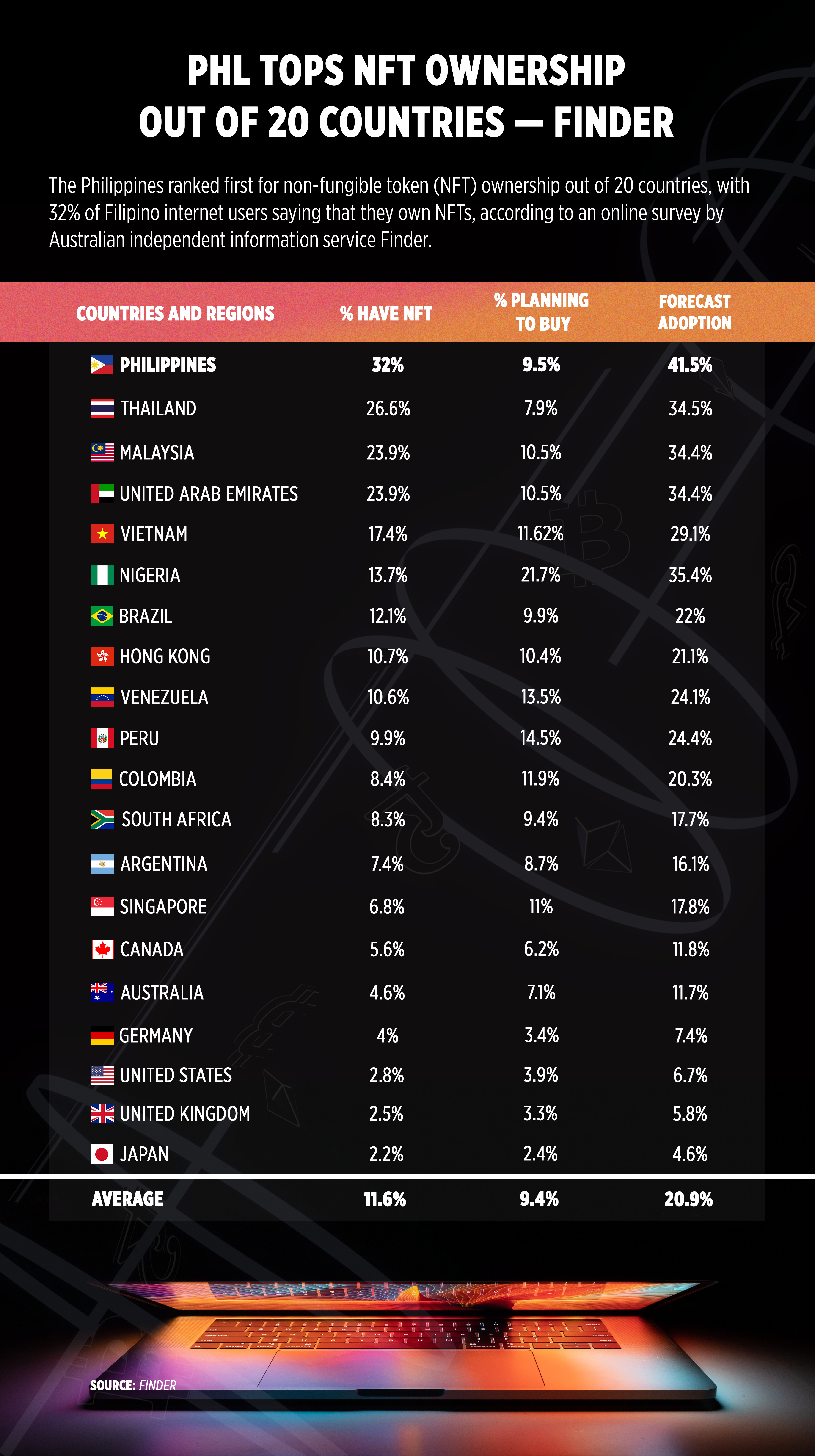 NFTs are non-interchangeable digital tokens that contain data proving ownership of items, mostly related to art, audio, video, and the like.

The popularity of NFTs in the country is mainly from in-game assets gained in play-to-earn games like Axie Infinity.

“It’s still very early days for NFTs in the Philippines,” Finder said in an official statement. “Fifty-one percent of Filipino internet users currently know what NFTs are and we expect adoption to grow with awareness.”

Jeffrey Zirlin, co-founder of Vietnam-based company Sky Mavis, which operates the crypto game Axie Infinity, said in the a16z podcast in November that Filipinos’ love for mobile games and their knowledge of cryptocurrency is what keeps the country ahead.

“There’s relatively high crypto literacy. It’s a very communal culture where information and trends can spread very quickly,” he explained. “Filipinos have traditionally been early adopters to many social networks and platforms like Facebook.”

The Philippines has the highest number of Axie players in the world. Groups like Yield Guild Games (YGG) cultivate this by onboarding Filipinos to their scholarship programs, where the play-to-earn lifestyle can be sponsored to generate income.

Finder said they expect further NFT adoption in the Philippines, with 9.5% of Filipinos surveyed saying they plan to own NFTs in the future.

Gabriel “Gabby” Dizon, founder of YGG, shared in the same podcast that the growth of play-to-earn and NFT ownership was due to unemployed Filipinos’ need to escape economic hardship during lockdowns.

“These were people who weren’t crypto enthusiasts. These were regular people that were stuck at home that had no jobs,” he said.

Finder also spoke of the potential for play-to-earn gamers to dive into other types of NFTs as well, saying they can be “a great gateway to cryptocurrency ownership.”

After the Philippines, Thailand came in second place with 27% of users owning NFTs, followed by Malaysia at 24%, United Arab Emirates at 23%, and Vietnam at 17%.

Countries like Nigeria and Peru are projected to see an increase of NFT adoption by 22% and 15% respectively, but Finder said that they will likely not come close to the Philippines’ rate. — Brontë H. Lacsamana

History without text: Telling stories through embroidery, botany and medals

A $133 million bet on a cryptocurrency designed to be boring

Play to earn: The rise of NFT gaming in the Philippines