THE PHILIPPINES ranked 67th out of 151 economies in a political economy index that measures the contribution of the so-called “elites” in wealth creation and the development of society.

The 2021 edition of the Elite Quality Index (EQx) by Singapore Management University (SMU), the Switzerland-based nonprofit organization Foundation for Value Creation (FVC), and the University of St. Gallen looks at the extent to which elites enable or hinder the economic and political growth of their respective societies by assessing whether their policies and business models create value (“high quality”) or extract it from the economy (“low quality”).

The study has 107 indicators, which in turn, is grouped into two subindices — power, which is the capacity to “enforce one’s preferences” and value, which looks at the outcome of productive activities. 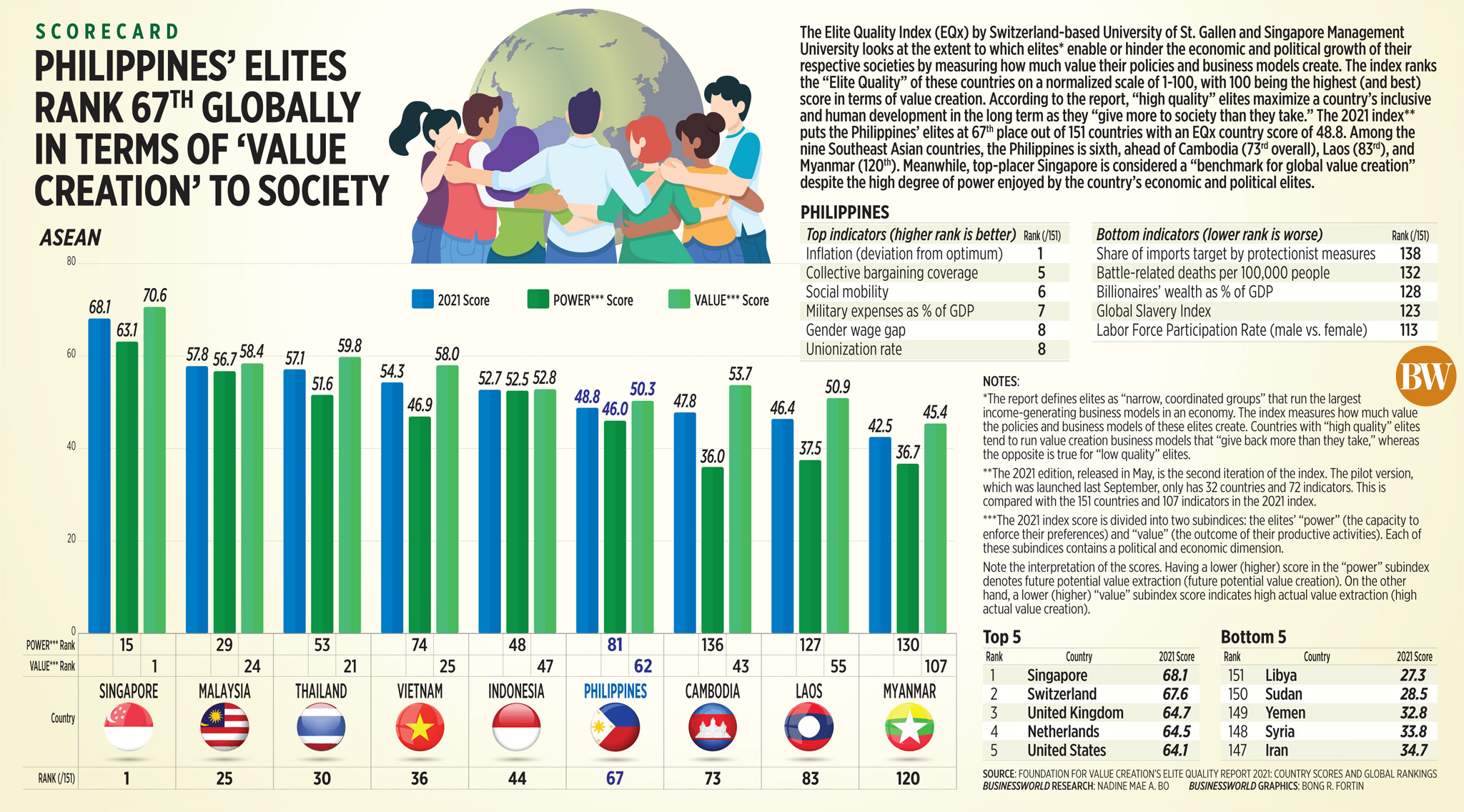 The study defines elites as “narrow, coordinated” groups that run the largest income-generating business models in an economy and those which successfully accumulate wealth. They include “economic interest groups” as well as “decision-makers of the political arena.”

Among the nine Southeast Asian countries, the Philippines was sixth, ahead of Cambodia (73rd overall), Laos (83rd), and Myanmar (120th). Singapore had the highest “elite quality” in the region, and the world.

The Philippines ranked relatively lower in the power subindex (81st place). Compared with regional peers, the country was ahead of Laos (127th), Myanmar (130th), and Cambodia (136th).

It ranked higher in the value subindex (62nd), but was only ahead of Myanmar (107th) in the region.

“The coordination capacity of elites develops and allocates society’s resources and human capital. However, not all elites use their coordination capacity to enlarge the economic pie available to the whole of society. Instead, some enlarge their own slice at the expense of growing the rest of the pie, exploiting the non-elites and leaving them with an unfair allocation,” the FVC said in the index’s Frequently Asked Questions portion on its website.

“In short, elites — on aggregate — in certain countries are better than elites in other countries, as measured by the extent to which they benefit and bring value to society at large,” it added.

In an e-mail, SMU sociologist Alwyn Lim said the Philippines’ elite quality is in the “middle band” of all the countries the index has ranked.

“While elite value creation in the Philippines is not exceptionally high, the elites there nevertheless still create more value for society compared with the ‘middle quality’ or ‘lagging elites’ for countries lower in the ranking,” said Mr. Lim, who is also one of the research partners in the study.

“In terms of the economy, there appears to be a high concentration of the country’s GDP (gross domestic product) in Filipino billionaires while it is also difficult for firms to enter the local market. On the other hand, the Philippines has done comparably well in the areas of collective bargaining, social mobility, and the gender wage gap,” he added.

“Despite this higher potential for value extraction, however, Filipino elites’ business models have managed to create a higher ranking on the economic value sub-index,” Mr. Lim said.

“This is an area of concern as these indicators reflect what previous research has suggested about political patronage in the Philippines in the context of its market liberalization measures in recent decades,” he said.

“If we examine the level 3 pillars of the Index, the country ranks relatively high in terms of ‘giving income,’ ‘taking income’ and ‘unearned income,’ reflecting the fact that there is an extensive system of corporate philanthropy at least among big businesses, which the elite own… However, the country ranks lower in terms of economic value, including ‘producer value’ and ‘capital value’ which reflects also the fact that many of the businesses that the elites are in are in sectors that are less competitive (mainly in the services industry) and produce a lower level of value added…,” Mr. Tuaño said.

Mr. Tuaño also agreed with one of the assessments in the report, which stated that “higher quality” elites tend to perform better in protecting their countries from the coronavirus disease 2019 (COVID-19) pandemic.

“To some extent, this is true. The performance of the business elite and especially how they value public welfare also affects a country’s response to economic, social and health disasters like the COVID-19 pandemic. The fact that the business sector has contributed by providing food and other emergency assistance to many marginalized areas of the country, and also have asked government that they procure vaccines for their employees and contribute to the public pool of these vaccines show their regard in terms of the public good,” he said.

“But the continuing increase in COVID cases, especially outside of Metro Manila at present, also shows the weaknesses of the government’s response and the fact that the policy makers seem not to have a clear strategic response to the COVID-19 pandemic and a clear idea of what the role of the private sector is in this area,” he further noted.

Asked how the country can improve its ranking, the economist hopes the country’s elite would invest more in industries that would increase the economy’s competitive advantage.

“[T]his requires providing capital in terms of research and development, upscaling the level of technology in the country, and strengthening training and education systems,” Mr. Tuaño said.

“While many big businesses are already participating in the National Government’s infrastructure program, investments in the ‘soft’ areas of infrastructure are needed,” he added. — Nadine Mae A. Bo