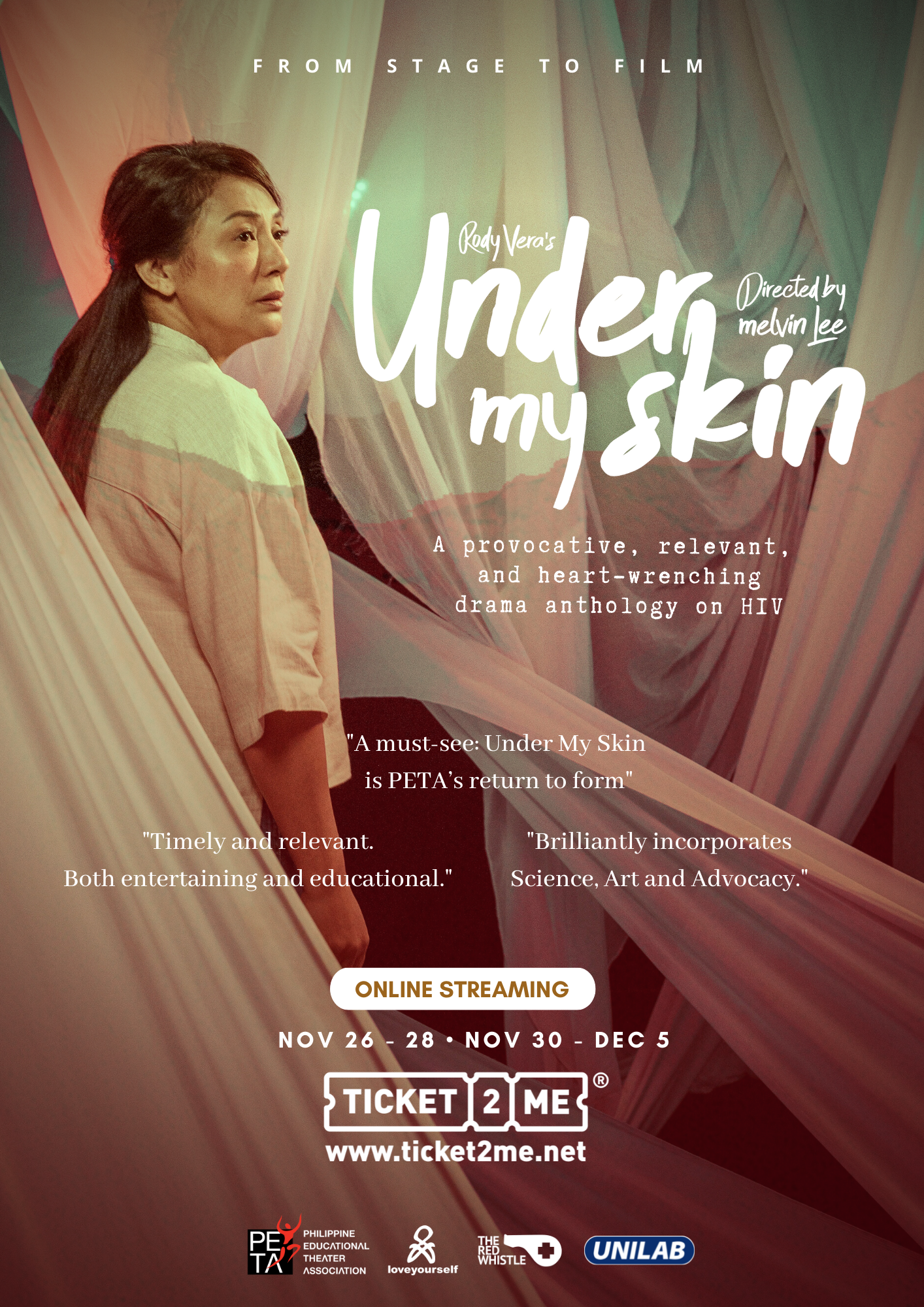 THE RUN of the first production of Philippine Educational Theater Association’s (PETA) 2020 season was cut short two weeks early when the first coronavirus disease 2019 (COVID-19) lockdown was imposed in March 2020. Theaters all over the country ground to a halt. But soon, the artists started to pivot. The Virgin Labfest theater festival went online. Then other groups started trying out the new platform — creating live works where the cast performed at home, then live works performed together but sans a live audience, or airing recordings of shows performed before the pandemic struck.

Now, Rody Vera’s Under My Skin, PETA’s last live production before the lockdown, will resume its aborted run. The anthology drama on HIV will be PETA’s second and last play of the year, after the online run of its popular jukebox musical Rak of Aegis. Under My Skin will be on view online over two weekends — Nov. 26 to 28, and Nov. 30 to Dec. 5.

COVID-19 is, after all, not the only disease out there that people need to learn more about.

In an effort to educate and spread awareness about HIV/AIDS, PETA gathered the cast and staff of Under My Skin in January to film the play.

“PETA believes that Under My Skin still has a lot to contribute to HIV and AIDS awareness. We have not fully optimized the potential of the production. And so, last Jan. 2021, PETA decided to video shoot the play with the intention of streaming it online,” PETA Executive Director Maria Gloriosa “Beng” Santos-Cabangon said in an online press conference on Oct. 15.

Under My Skin is inspired by real people and events. It depicts the realities, triumphs, and struggles of people living with HIV. In the show, the audience is introduced to Jonathan, Greg, Syd, and Mario whose relationships are tested when Jonathan gets infected; HIV-positive teenager Dino whose status is discovered when he contracts tuberculosis; Mary Rose, a mother who unknowingly passed down the virus to her son after getting it from her husband; a gay beauty parlor employee experiencing work-related discrimination. The audience learns the causes, effects, and treatments of HIV-AIDS through Dr. Gemma Almonte (played by Cherry Pie Picache).

“We’ve been hit by different viruses; HIV is one thing that we should not stop dealing with… Let us inform everyone and educate everyone that it is not a death sentence,” Ms. Picache said at the press conference.

Director Melvin Lee returns to direct the play and make the transition from stage to screen. There were online rehearsals prior to its scheduled one-day shoot. The scenes were shot in sequence with a three-camera setup to provide various perspectives.

“The intention now since it is online is to give the play different lenses or points of view for the viewer to appreciate the scenes and the [story of each] character,” Mr. Lee said.

“There is a certain standard [that is] close to film but there is still the feel that, at the end of it, what you are watching is still a stage play,” he added.

“It is our hope that this endeavor will help build an informed and caring community,” Ms. Santos-Cabangon said.

Under My Skin is co-presented by HIV advocacy organizations LoveYourself PH and The Red Whistle, and UNILAB, Inc. Tickets are available at P180 for Livestream, and P250 for Video on Demand tickets via www.ticket2me.net, bit.ly/undermyskinonline, or through any of the Under My Skin Online showbuyers. For bulk sales, and more sales information, contact Mitch Go at 0917-539-1112. — Michelle Anne P. Soliman

VLF 2020: On family and acceptance

Keeping an eye on the prize at a cost