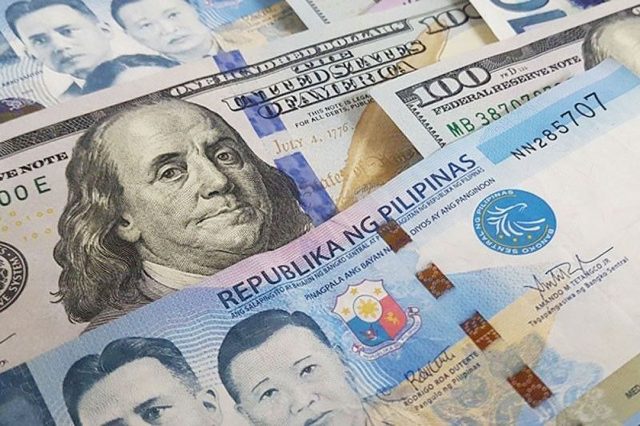 THE PESO is expected to weaken versus the greenback this week on expectations that inflation accelerated and went beyond the central bank’s target last month.

The local unit closed at P49.84 per dollar on Friday, shedding 1.5 centavos from its P49.825 finish on Thursday, data from the Bankers Association of the Philippines showed.

Meanwhile, it gained 11.5 centavos against its closed of P49.955 versus the greenback a week earlier.

The peso’s slight depreciation from its Thursday close was due to cautiousness ahead of the release of the August US jobs report, Rizal Commercial Banking Corp. Chief Economist Michael L. Ricafort said.

Data from the US Labor department released after trading hours on Friday showed non-farm payrolls rose by 235,000 in August, which was its smallest increase since January, Reuters reported. This was also much weaker than the 750,000 new jobs estimated by analysts in a Reuters poll.

Fed Chairman Jerome H. Powell said asset purchases could be reduced this year if the US economy continues to improve as anticipated. However, he did not give details on the timing and pace of the central bank’s plan to wind down bond purchases and hike interest rates, a message interpreted by the market as being dovish.

For this week, Mr. Asuncion said peso-dollar trading will take its cue from the US jobs data released on Friday as the weaker-than-anticipated report fanned expectations that the Fed will push back its tapering and rate hikes to support the recovery of the world’s largest economy.

Meanwhile, Mr. Ricafort said the market will look at latest data on inflation and trade due for release this week for leads.

The Philippine Statistics Authority (PSA) will report the August consumer price index (CPI) on Sept. 7 and the July trade balance data on Sept. 9.

A BusinessWorld poll of 16 analysts yielded a median estimate of 4.4% for August inflation. If realized, headline inflation will again go beyond the central bank’s 2-4% target following the 4% print in July and will be faster than the 2.4% logged in August 2020.

Inflation averaged 4.4% in the first seven months. The Bangko Sentral ng Pilipinas expects the CPI to average 4.1% this year.

On the other hand, latest PSA data showed the country’s trade deficit stood at $2.83 billion in June, slimmer than the $3.17-billion gap in May but wider than the $1.42-billion shortfall a year earlier.

No more man in a barrel

Lady Warriors still have much to fight for in Season 81