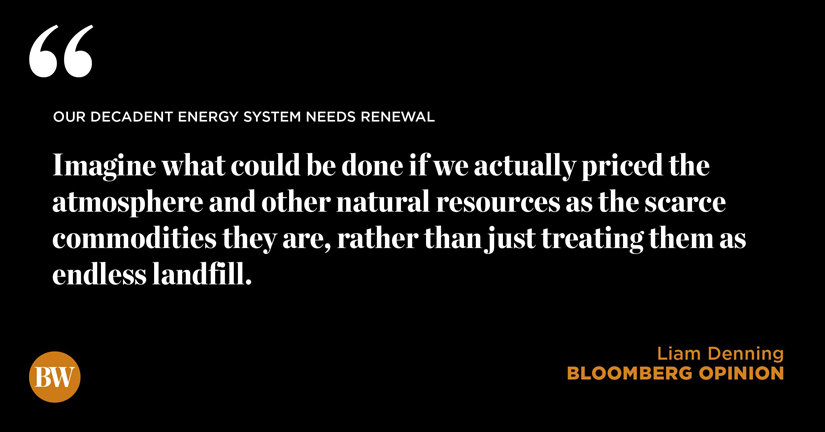 LIKE MANY of you, I’m sure, I read Ross Douthat’s essay on “The Age of Decadence” in Sunday’s New York Times while sprawled on a chaise, picking at my smashed avo and laudanum. Stirring from the languor, I wondered: How does energy fit with this thesis?

Our energy system is decadent at a fundamental level. Roughly four fifths of what is called primary energy consumption comes from burning fossil fuels, and thermodynamics ensure the majority of that kind of “consumption” is actually just waste heat. We absorb the pump price of buying four gallons of gasoline for the useful energy of one because that one remains incredibly energy-dense and convenient.

The convenience of fossil fuels gets at the other aspect of their decadence. As used currently, they are the definition of living for the moment. Modern society results from our use of coal, oil, and gas. But as Thomas Edison lamented a century ago, “we live like squatters,” burning the fixtures for heat, light, and transport.

Transitioning away from that model isn’t easy, especially for certain applications such as aviation, or for the many without decadent levels of income or wealth. Still, in the developed world, our unwillingness to comprehensively price fossil fuels’ externalities — especially greenhouse gas emissions — is at this point a conscious decision to prioritize excesses such as overbuilt SUVs over coming generations’ access to a safe and prosperous environment. What’s more decadent than that?

Emerging economies are in a different position, seeking raw calorific power to attain standards of living achieved by the West decades ago. This underpins a common riposte to calls for decarbonization, effectively casting oil majors and coal miners as the saviors of, say, Bangladeshi farmers. It’s a beguiling argument only if you assume nature gives a damn about inequities and define the standard of living in narrow terms. Diesel-run machinery and coal-fired electricity are undoubted boons to those struggling without them today. But then you must face the troublesome point that Bangladesh is ranked in the top 10 countries most vulnerable to the effects of climate change.

The seeming Gordian Knot of addressing climate change while simultaneously serving the world’s underpowered multitudes gets to the part of Douthat’s essay with which energy doesn’t fit. One of his signs of decadence is the apparent exhaustion of meaningful, and profitable, innovation in our self-indulgent, screen-addled 21st century economy: “We used to go to the moon; now we make movies about space.”

Fine. Juicero and all that. Point taken.

Yet the past 10 years have shown the energy sector to be anything but stagnant and inconsequential. US oil and gas production just engineered its biggest decade ever on the back of sheer experimentation (climate folks, hold that thought). It also saw the cost of wind and solar technology decline by approximately 50% and 90%, respectively (90% for lithium-ion battery storage, too). The UK, whose coal fields birthed the industrial revolution, now goes for days at a time without burning a single lump for its power. And electric vehicles — Edison’s forlorn dream — have gone from curio to dominating marginal growth in several major vehicle markets, including China’s. Work on a swarm of other potential breakthroughs, ranging from carbon capture to vehicle-to-grid power flows, continues.

As with any dynamic endeavor, there is mess, contradiction, and waste. The shale boom that helped tip coal into terminal decline in the US is partly built on the same cheap financing and weak governance underpinning the Silicon Valley flame-outs and deadbeats cited by Douthat. It is also heavily subsidized by the socialization of the costs of its emissions. Renewables have also seen their fair share of dead-end technologies and business models that run on sub-2% Treasuries just as much as photons. Meanwhile, Tesla Inc. has undoubtedly pushed electric vehicles further toward the mainstream; but sustained profitability, especially at levels commensurate with its valuation, remains elusive.

Yet the profound changes witnessed in energy over the past decade have been achieved even in the absence of overhauling its underlying system of incentives and penalties. Imagine what could be done if we actually priced the atmosphere and other natural resources as the scarce commodities they are, rather than just treating them as endless landfill. Besides the decadent West, the technologies encouraged by such signals could also offer sustainable answers to the Bangladeshi farmer’s privations without simultaneously raising profound risks for their descendants.

Like his look back at the men on the moon, Douthat quotes technology tycoon Peter Thiel’s lament that “we wanted flying cars, instead we got 140 characters.” Ah, the wryness. But then one recalls that, even as he yearns for meaningful innovation, Thiel also went out of his way to help elect a president who floats notions about wind-turbine noise causing cancer and leads a party where many reflexively dismiss inconvenient science and ditch their professed faith in market economics whenever carbon enters the equation. Even genius has its foibles.

The point is that there is plenty of innovation happening, and waiting to happen, in energy — if we choose to encourage it. We put a man on the moon because our priority was winning a Cold War. We haven’t yet found an existential need for flying cars.

Dealing with the deferred costs of modernization by retooling our energy grids and transportation is a challenge of even greater importance and scope, encompassing innovation in technology, markets, and how we organize our built environment. A cost-effective, scalable means of storing electrical energy for days, weeks or months at a time would do far more for society than another lunar landing.

All of this carries moonshot risks and Apollo-level opportunities for achievement. And it addresses issues that, even if we have persuaded ourselves otherwise, cut across political affiliation. If decadence is the problem, then few endeavors offer a route to renewal like fixing the ills of our energy system.