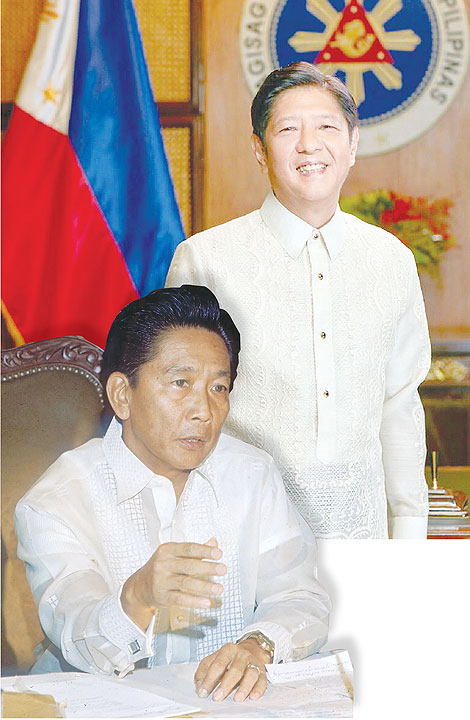 President Ferdinand Marcos, Jr. was in the United States on a six-day state visit, and was pointedly absent during the 50th commemoration of his father’s Sept. 21, 1972, Presidential Proclamation (PP) 1081 which placed the entire Philippines under martial law.

PP 1081 was implemented in the early hours of Sept. 23. Military teams arrested in their homes or work places journalists and academics; artists and writers; labor, student and farmer leaders; and members of the political opposition. They were then brought to various detention centers where they were held for indefinite periods.

Congress, newspapers and radio and television stations were shut down, and international flights and passports canceled. Filipinos awoke on the 23rd to find no newspapers on their doorsteps, only static on radio, and blank screens on their television sets.

Marcos Sr. went on government radio and television to claim that martial law was necessary “to save the Republic and reform society.” With the shutdown of Congress and the arrest of government critics, rather than save the Republic he had made himself absolute ruler on its ruins. But his pledge of reform implied that he would bring about enough changes to address such citizen concerns as unemployment and high prices.

In Today’s Revolution: Democracy, the book ghost-written for him by one of the country’s most capable writers, he had even claimed that he would wage a “revolution from the Center.” Apparently, however, he was merely attempting to appease and mislead reform-minded groups and individuals so as to counter the demands for fundamental changes that were echoing in the streets. He declared martial law to silence that clamor for the democratization of Philippine governance and society, but primarily to keep himself in power indefinitely.

Already President for six years in 1972, Marcos remained in power for 14 more years until he was overthrown in 1986 by the EDSA-1 civilian-military mutiny. But his “revolution from the Center,” as the state of the country so clearly revealed during those 14 years of one-man rule, was never more than words.

Marcos could have made good on his promise of a government-led “revolution,” given the powers at his disposal. But the human rights violations, the social inequality, and the systematic plunder of the economy that added millions more to the legions of the poor drove thousands into rebellion and opposition despite the threat of arrest, indefinite detention, torture, enforced disappearance, and/or summary execution.

He also had time enough to initiate some level of development in a country with vast natural and human resources to rival that of its neighbors Malaysia, Singapore, Thailand, and Vietnam. As those countries have demonstrated, development can be achieved despite internal dissension, ethnic differences, political upheavals, and even wars. Vietnam, for example, emerged from over 20 years of war only in 1975, but has caught up with the Philippines, and is now Southeast Asia’s biggest rice exporter. And Singapore’s volatile ethnic mix did not prevent its transformation into First World status.

His family and its partisans claim that had he not been overthrown in 1986, Marcos Sr. could have transformed the country into “another Singapore.” But they fail to mention that he had more than 20 years to do so, and that his over two decades as President included 14 years as absolute ruler.

What he did succeed in doing, said the late Singapore Prime Minister Lee Kuan Yew, was to pillage the country. In his book From Third World to First: The Singapore Story 1965-2000, Lee noted that “Only in the Philippines could a leader like Ferdinand Marcos, who pillaged his country for over 20 years, still be considered for national burial,” and “his wife and children allowed to return to engage in politics.”

Lee was the architect of Singapore’s transformation from a post-colonial malarial swamp into the most developed country in Southeast Asia, which he had pledged to do upon assuming power in 1959. He attributed to Filipino culture’s being “soft and forgiving” what to him was unthinkable for Singaporeans.

There is some truth in that observation: most Filipinos do not hold themselves, much less the people they elect, to high standards of behavior. But equally relevant in explaining the country’s seeming softness towards the Marcoses are such realities as the shared interests of the Philippine political class, which prevail over their seeming differences.

The oligarchy’s sense of common interests helps explain why then President Fidel Ramos, who was among the leading figures in EDSA 1986, allowed the Marcoses to return to the Philippines in 1992 — and why, years later, former President Rodrigo Duterte mandated the burial of Marcos Sr.’s remains in the Libingan ng mga Bayani. (Heroes’ Cemetery). More recently, Juan Ponce Enrile, who, together with Ramos led the military faction that helped remove Marcos from power in 1986, supported his son’s campaign for the Presidency and was subsequently named his Chief Legal Counsel. And most telling of all was former antagonists Gloria Macapagal-Arroyo and Joseph Estrada’s coming together to support Marcos Jr.’s candidacy, together with Rodrigo Duterte.

The consequences of all this “softness” between supposed and former political foes include not only the loss of historical memory, but also its replacement by the myth that the martial law period was a “Golden Age.” Forgotten, or never understood, is that rather than such an idyllic period, the years of the Marcos dictatorship were the darkest times in recent Philippine history.

Both illusions were nevertheless indispensable to the election of Marcos Jr., ironically on the 50th anniversary of his father’s imposition of martial rule. But even more disturbing is the mass disaffection with what the citizenry perceive to be democracy and their embracing of authoritarianism, together with the use of State violence against dissenters, government critics and “trouble-makers,” as the means of replicating that mythical past.

Democracy is a work in progress but is everywhere in retreat before the onslaught of the mercenaries of disinformation and the demagogues behind them. Ferdinand Marcos, Jr. has not placed the entire country under martial rule as his father did 50 years ago — at least not yet. But he is arguably nearly as powerful, as a consequence of, among others, the disinformed mass of the electorate’s packing both houses of Congress with his kin and allies, the judicial system’s pliability to Executive pressure, and the police and military’s unquestioned partiality to his rule.

In the coming six years after the 50th anniversary of the imposition of martial law, and with another Marcos as President, what he will do with that power needs watching. Like his father, Marcos Jr. also promised the citizenry the changes that will rescue them from the pit of perennial poverty, despair, and hopelessness. The question is, will that promise, like his father’s, be for nothing, and merely a means of gaining and keeping power for the sake of advancing his personal, familial and class interests, or will he deliver on it?

Why some words hurt some people and not others