Last week, on Sept. 12, the National Grid Corp. of the Philippines (NGCP) made a big announcement of red and yellow alerts in the Luzon grid. It was a bad situation for three reasons.

One, it came just five days after a successful business roadshow by the Marcos Jr. administration in Jakarta and Singapore where some $14.4 billion of pledged investments to the Philippines were announced. When those big foreign investments come, they will need a huge power supply and yet the Philippines still experiences yellow-red alerts of thin power reserves and potential blackouts until now.

Two, the main reason was not power generation deficiency but the tripping of transmission lines of the NGCP — two 500 kilovolt (kv) lines connecting Kaampat (Bolo) to San Manuel (Nagsaag) tripped on the morning of Sept. 11, but the NGCP and some sectors blamed the affected power plants. Two big coal plants, Sual (1,294 megawatts or MW) and Masinloc units 2 and 3 (679 MW) tripped because there was no transmission line or “highway” to deliver the power they generated. In addition, three plants — Masinloc 1, GMEC 2, SLTEC 2 — experienced derating or below-capacity generation of 226 MW.

There were three other plants that were already out prior to the grid tripping incident — Calaca 2, Dinginin, and Quezon Power — with a combined 1,428 MW.

And, three, it highlighted once again NGCP’s non-compliance with Department of Energy (DoE) Circulars on contracting ancillary services (AS) to help ensure grid stability when there are unforeseen generation or transmission problems.

See these reports in BusinessWorld: “DoE to investigate forced outages that raised red alert over Luzon” (Sept. 12), and “NGCP ‘in discussions’ with DoE to ensure adequate power supply” (Sept. 14).

The NGCP is the only remaining national private monopoly in the country. It is a very privileged and pampered company. From 2017-2021, its average net income was P21 billion/year from gross revenues of P48 billion/year (see this column’s piece, “Electrifying profit and penalties, the case of NGCP, DUs, and ERC,” Feb. 7, 2022). The other national monopolies are government-owned corporations like SSS, PhilHealth, and Pag-IBIG.

Transmission should be demonopolized but this will require legislation. Meantime the monopoly should be strictly monitored by the Energy Regulatory Commission (ERC), penalized for acts or inaction that lead to frequent yellow-red alerts due to transmission line defects, and/or expensive transmission charges. The previous ERC leadership failed to do this job.

Also last week, the Independent Electricity Market Operator of the Philippines (IEMOP) held a media briefing on power supply demand and pricing in the Wholesale Electricity Spot Market (WESM). There are three things I want to highlight from the IEMOP data.

One, there were many instances or periods from Aug. 25 to Sept. 10 when the secondary price cap of P6.25/kwh was imposed. Price control is said to protect the consumers but the opposite really happens. At forced low prices, someday the power supply will not be there when people need it most — blackout. Damaged appliances, darkness and heat, use of candles or gensets are more expensive than temporary price hikes if there is no price control.

Two, there was huge uptick in peak demand — the average increase in July-September 2022 over July-September 2021 was 6.6%. This shows consumer demand is high, investment optimism is high — this is good news. And since growth in power demand is a good proxy for GDP growth, my estimate of third quarter 2022 GDP growth would be about 8%, +/- 0.5%. In the second quarter of 2022, peak demand growth was 5.7% while GDP growth in Q2 was 7.4%.

And, three, intermittent, unstable and unreliable wind, solar, and biomass continue to generate very low power until today, only about 3% of total power generation in June-August 2022, 13 years after the Renewable Energy (RE) law of 2008 (RA 9513) was enacted. (see Table 1)

But we frequently hear and read about the strong lobby by intermittent RE. See these recent reports in BusinessWorld:

In many countries in Europe, the inconvenient fact is that as more wind and solar are added to the grid, overall power generation declines, and GDP growth is low and anemic. This is because many non-intermittent and reliable fossil fuel and nuclear plants exit the market as they are not a priority in the grid and are being demonized regularly.

The opposite occurs in East Asia. In the ASEAN-5 especially, wind-solar share remains low in the total generation mix and countries grow fast (see Table 2). We should keep business as usual, have more fossil fuel plants and limit the share of intermittent sources in the grid. 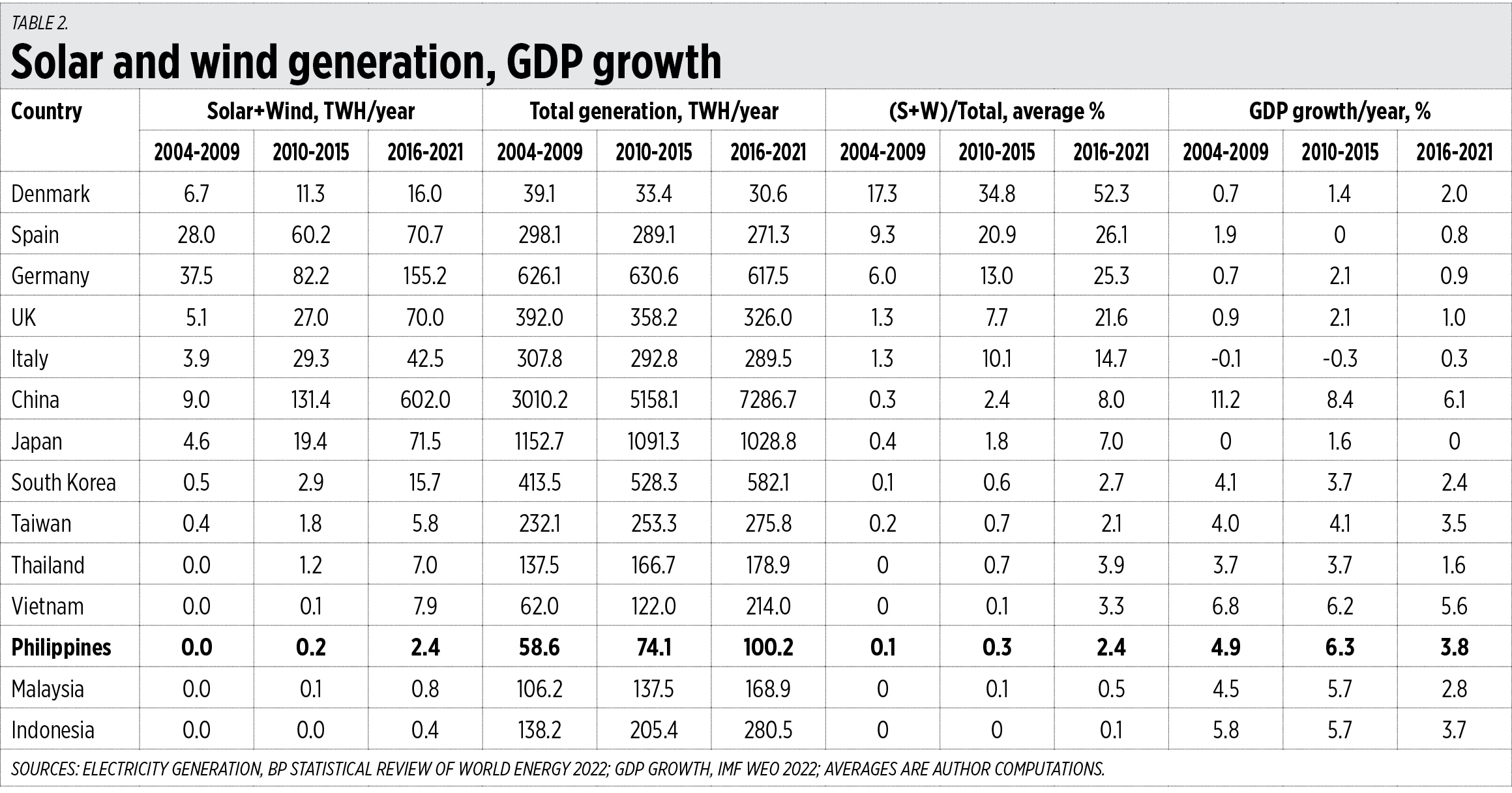 And then there are these two related reports in BusinessWorld: “DoE’s Lotilla says gov’t involvement in power will not bring rates down” (Sept. 8), and “Consistent application sought for key ERC ruling” (Sept. 15). I express my support for the positions taken by Energy Secretary Raphael Lotilla, and by ACEN Corp. that any ERC ruling on the SMC power companies’ petition for a rate hike must apply to all other players that will seek similar petitions.

On the budget, taxes, and borrowings for 2023, there is one important revenue source to pay the P2+ trillion/year of net borrowings from 2020 to around 2024: privatize many government corporations and other assets. I propose three state enterprises that must be prioritized for privatization, and nearly 20 others over the long-term (see Table 3). Government-owned power plants and gambling companies should be at the top of the list. There is zero market failure being addressed by these state enterprises, they remain simply due to politics. 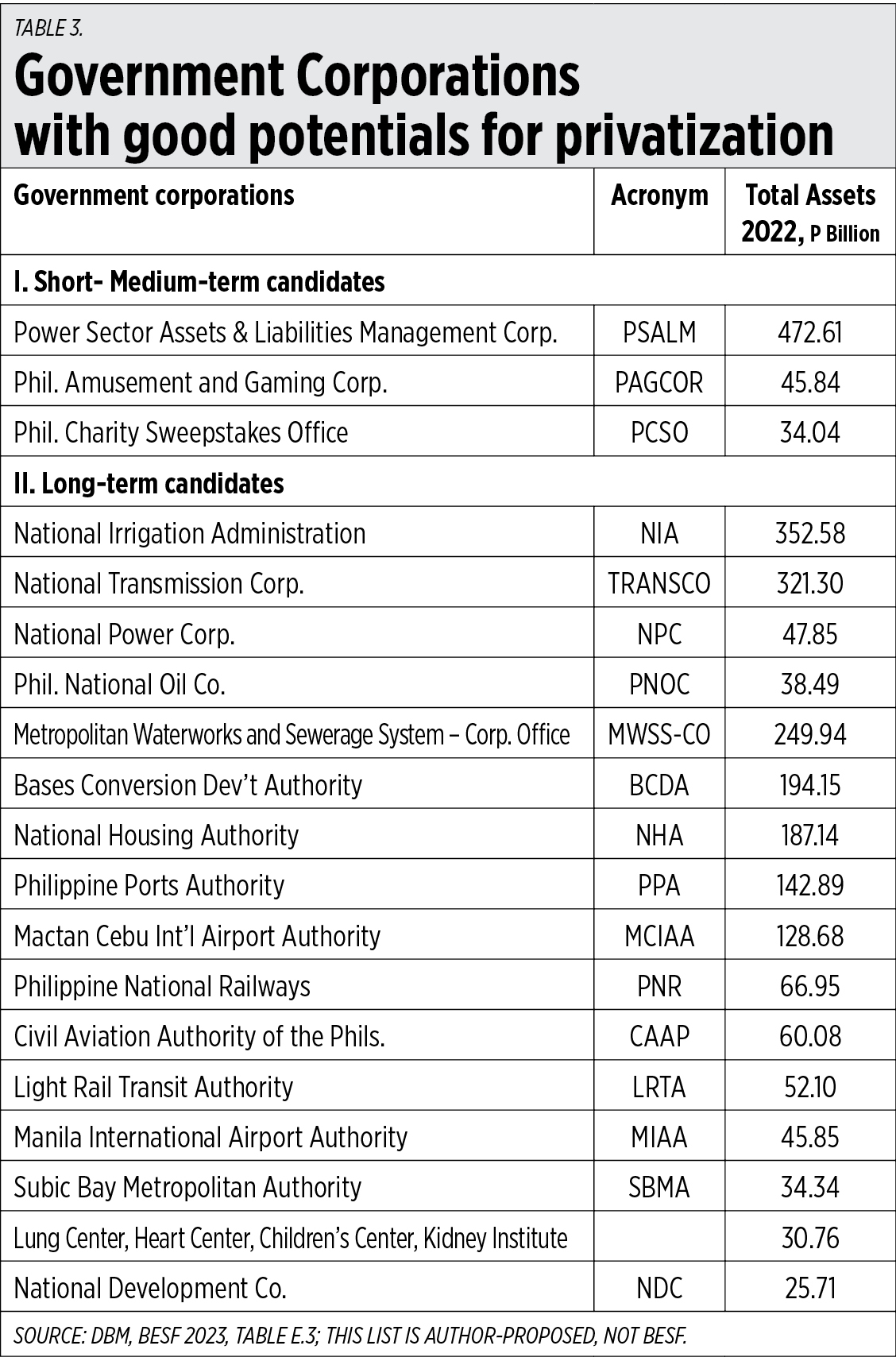 Finally, related to a recent piece in this column, “Motorcycle taxis, illicit tobacco, and electric cooperatives” (Aug. 8) where I noted that the estimated value of foregone tobacco taxes due to smuggling is P24-49 billion/year, House Bill (HB) 3917 was filed amending the Anti-Agricultural Smuggling Act of 2016 to classify cigarette smuggling as “economic sabotage” and imposing higher fines and penalties, and imprisonment.

This is a good bill authored by Ilocos Norte Representative Ferdinand “Sandro” Marcos and Party-list Representative Margarita “Migs” Nograles. The anti-smoking NGOs and activists should support moves to fight illicit tobacco because smuggled cigarettes are so cheap — the retail prices are lower than the tax alone of P55/pack this year — that they encourage more smoking, not less.

When tax avoidance and smuggling are controlled, there will be less need to raise taxes elsewhere.