This piece will cover six topics and events that occurred last week so we go straight to them.

1. GROWTH RECOVERY AND RISING INFLATION
Last week, the Philippine Statistics Authority (PSA) released the 2nd quarter (Q2) 2022 GDP growth and it was 7.4%, a bit lower than the Q1 growth of 8.2%. The PSA also released the July 2022 inflation rate last week and it was 6.4%, a bit higher than June’s inflation of 6.1%.

So, for Table 1, I averaged the GDP growth for Q1 and Q2 of selected countries and compared them with the Philippines’. Then I also averaged the inflation rate from January to July. The big East Asian economies with no Q2 GDP report yet, like Japan and Thailand, are not included in the table.

The Philippines so far has the fastest growth recovery in first half 2022 with 7.8%, followed by Malaysia and Vietnam. The main explanation is low base effect — the Philippines had the deepest GDP contraction in Asia in 2020, followed by low growth in 2021, so high growth in 2022 is just trying to recover and slightly surpass the 2019 GDP size and level.

The Philippines inflation for January-July is 4.7%, within the inflation target of 4.5%-5.5% set by the Development Budget Coordination Committee (DBCC) or the economic team (Table 1). If GDP growth in the second half of 2022 is sustained at 7-8%, this column projects a full year inflation of 5-5.2%. 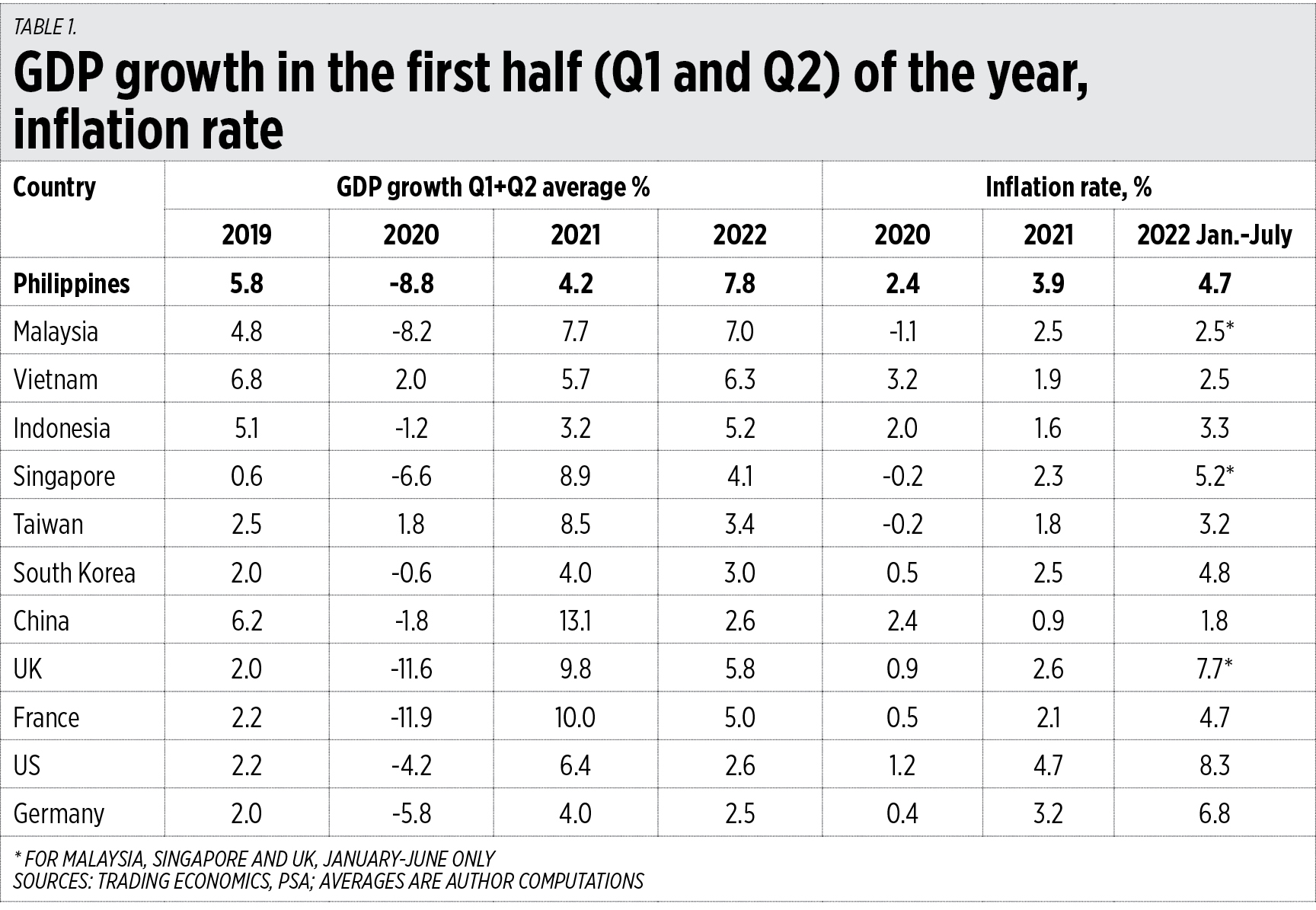 The DBCC growth target of 6.5%-7.5% in 2022 is attainable — and we will likely surpass it. The growth target from 2023-2028 of 6.5%-8% is also attainable and something that we should work collectively for. Fast growth automatically tempers inflation via a higher supply of goods and services in the economy.

Notice Europe and the US, their deep contraction in 2020 and anemic growth after, coupled with high inflation this year. Stagflation is becoming more real for them. Many businesses there will consider migrating to Asia, including the Philippines.

The Philippines just enacted many market-oriented reforms: the corporate income tax cut under the CREATE law, the liberalization of the Public Service Act, the Foreign Investment Act, the Retail Trade Liberalization Act, dynamic Public Private Partnership (PPP), and there are no planned major tax hikes on the horizon. These are good attractions for those foreign businesses to come in, and for those already here to stay put. 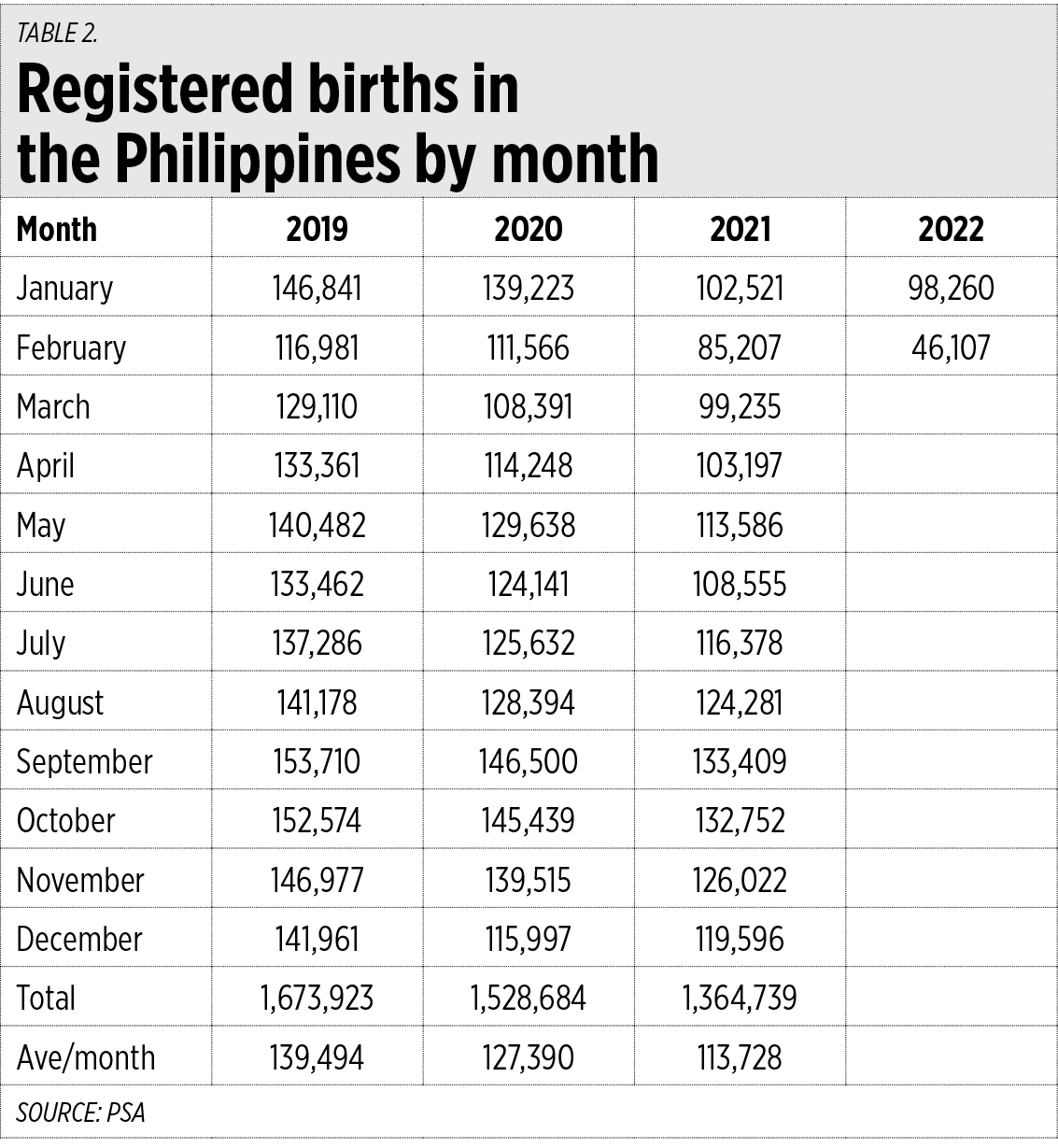 There are three possible reasons for this trend. One, the Reproductive Health Law of 2012 (RA 10354), essentially state-sponsored population control dubbed as “pro-choice” family planning, has kicked in.

Three, the effect of vaccination that may have affected some people’s fertility. Mass vaccination in the Philippines started in March 2021. The various COVID-19 vaccines were developed in just months, with no long-term study on reproductive health of people done, they were rushed as emergency use authorization (EUA).

The decline in births is bad, meaning fewer entrepreneurs and fewer workers in the future. The Marcos Jr. administration should pause mass vaccination for young and healthy people pending the results of big and multi-country studies on the impact of COVID-19 vaccines on fertility.

3. RISING POWER DEMAND
Also last week, the Independent Electricity Market Operator of the Philippines (IEMOP) held a media briefing which I attended. Among the highlights of the August briefing were:

And three, a rising share of coal power, a declining share of natural gas and intermittent renewables (Table 3). The forced transition to “decarbonization” and to more intermittent renewables, and less coal power is dangerous. It can lead to more blackouts in the future and businesses will not come in or stay if they have to buy big gensets, meaning higher production cost and less profit for them. The dirtiest and most dangerous energy sources are candles and gensets, not coal. More candles mean more fires and destruction of property. More gensets mean more air and noise pollution. Dark streets at night mean more road accidents and more crime.

4. TRANSPORT LIBERALIZATION, NOT RESTRICTION
Also last week, noted consultant on infrastructure and public transportation Rene Santiago was interviewed on OneTV and he shared many good points. Among these: 1.) Cable cars are a technically viable option for urban commuting but only under special circumstances such as short trips, a hilly terrain, and narrow roads with no expansion possibilities; 2.) Public transportation will worsen with a shortage of buses and jeepneys, and the root causes are two flawed policies: re-franchising and a cap on fares; 3.) Service Contracting Scheme (SCS) is wrong, is not equitable nor is it sustainable, it spawned free rides on selected routes in a few urban centers, and more than 1,500 LGUs did not benefit from it.

While new radio and TV networks are born, there is also the consolidation of broadcast media in many countries around the world. Consolidation means more visibility, more content, and more accountability and this will be good for media consumers.

Our home internet is Red Fiber with a Cignal TV subscription. The internet is really fast and Cignal TV has many channels on board — I am happy with our setup. The partnership would possibly mean more channels, more choices, at the same price. Good.

6. SUGAR IMPORTATION AND FREE TRADE
I am from Cadiz City, Negros Occidental and whenever I go back home, I am still fascinated by the wide sugar farms that stretch from the highway to the mountains. But there are also huge land conversions from sugar to commercial-residential.

The new Silay-Bacolod airport, with its long runway and wide access roads and the diversion roads, were previously sugar farms. The large Ayala subdivision in Talisay and other new big subdivisions in the province were once sugar farms.

With declining hectarage, domestic sugar output is either flat-lining or declining while demand keeps rising. We should have free trade in sugar, and there should have been no scandal over sugar importation because it is something that we should do yearly to protect consumers.

DoTr to roll out modern jeepneys