Survey results are possible nudge instruments of public policy. They could restore the appropriate focus of those in authority to what the times and the seasons demand. Since surveys derive from the people themselves that the government ought to serve, they are no less like a poll on what on the ground needs priority attention of the leadership of the land.

“Nudging” to behavioral economist Richard Thaler and legal scholar Cass Sunstein, who published Nudge: Improving Decisions About Health, Wealth and Happiness in 2008, is simply any intervention in the so-called choice architecture that could alter people’s behavior in a predictable way without impinging on any options or perhaps changing their economic incentives in a different way. But Thaler and Sunstein were quick to add that such intervention should remain “easy and cheap to avoid.”

Nudging, being a soft instrument to promote public policy, has become game changing today when a certain notion of rationality breaks down as when people decide on public policy without internal consistency, uneven over time and, for some, context-specific. They could be driven by mood changes, or biases. This is when one finds difficulty reconciling public policy design and the absence of rationality.

For there is an obvious breakdown of rationality these days.

Ronald Holmes of Pulse Asia Research, in releasing its June 22, 2022 “Nationwide Survey on Urgent National Concerns and Issues to be Prioritized by the New President” on July 12, cited certain developments “that transpired in the period leading up to the survey period and during the conduct of the face-to-face interviews.” Some might come up to outside the bounds of rationality. 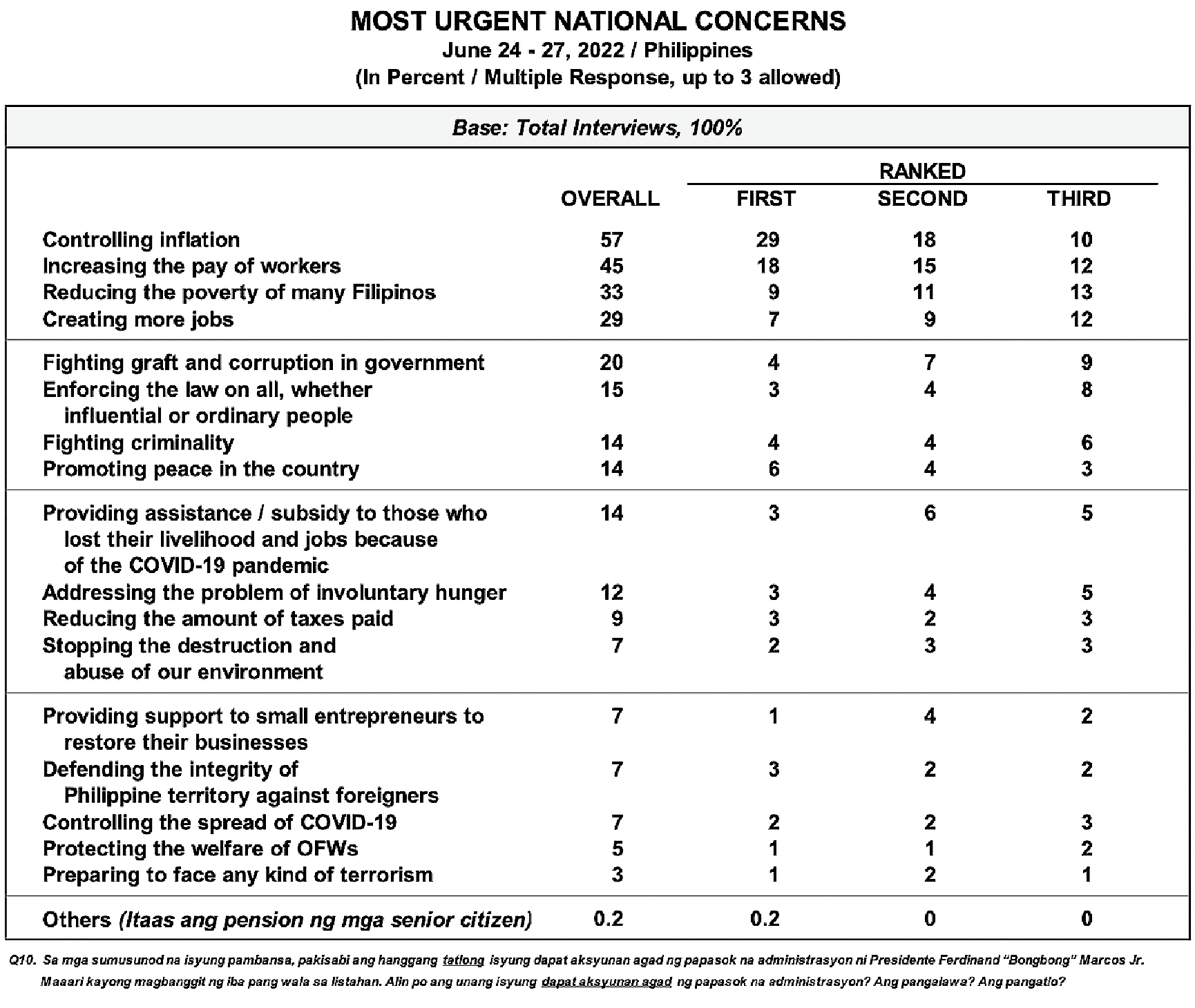 One, the United Vloggers and Influencers of the Philippines (UVIP) is now pursuing accreditation with the Securities and Exchange Commission to gain access to Malacañang. Whether this type of social media without the editorial safeguard of its traditional counterpart would be institutionalized in this time of uncontrolled disinformation should be a big issue from a public policy perspective. Only the private, organized fact checkers could perhaps stand a chance against any irresponsible uploads to social media.

Two, a couple of executives of Pharmally Pharmaceuticals Corp. were released on June 2 upon the signing of their release orders by the outgoing Senate President. Instead of being charged possibly with plunder, graft, and perjury along with some public officials, they were freed because the Senate Blue Ribbon Committee report was signed by only eight senators out of the required 11. How this could disabuse the people’s mind that we no longer tolerate the culture of impunity should be a puzzle to many.

Three, the National Telecommunications Commission, upon the request of the former National Security Adviser, blocked access to 27 websites of groups suspected to be allied with the Communist Party of the Philippines. We can only hope that there was due diligence before this was undertaken, that this was not red tagging, that the freedom of information was not breached. Are there no attempts to reopen peace talks with the Left for the sake of, yes, rational peace and unity?

Four, we have started to see the second-round effects of cost-push inflation: minimum wages in the National Capital Region (NCR) and 13 other regions across the country were scaled up effective June 2022; and the P1 provisional increase in the minimum fare for jeepneys in four regions including the NCR. Cab drivers also filed their petitions for a P20 increase in the flag-down rate. The Philippine Statistics Authority (PSA) report on the May inflation of 5.4% rocked the market without realizing the June inflation was to be much higher at 6.1%. The peso contributed to inflation because it has also sharply depreciated beyond P56 to a dollar. Yet, many of us continue to insist inflation is cost-push and interest rate adjustment, and much more an aggressive one, could just mess up growth.

So, what can we nudge this government to focus and act on?

Pulse Asia’s latest face-to-face national survey, conducted between June 24 to June 27, is most revealing because the top four national concerns have hardly changed over the years.

Controlling inflation remains the major concern of the majority of those surveyed, or 57%. Averaging 4.4% for the first half of 2022 with the June’s 6.1% in the Philippines, inflation is today’s scourge in the global economy. No less than the IMF’s Managing Director Kristalina Georgieva (“Facing a Darkening Economic Outlook: How the G-20 Can Respond,” July 13, 2022) rallied member countries to “do everything in their power to bring down high inflation.” She hit the right notes when she clarified that “persistently high inflation could sink the recovery and further damage living standards, particularly for the vulnerable.”

As we wrote this column yesterday, the Bangko Sentral ng Pilipinas (BSP) decided to adjust its policy rate by 75 basis points, from 2.5% to 3.25%. Its decisive forward guidance was exceeded by its appropriately aggressive monetary move ahead of the Aug. 18 meeting. Let this nudge come gently but let it continue to fortify its resolve. There are too many irrational white noises out there, and the battle is yet to be won.

Nudging is hardly necessary when it comes to BSP communication. They are doing a splendid job at this. It is crucial because policy credibility should be preserved.

The second major concern of the people is increasing workers’ pay, as indicated by 45% of those polled. If inflation is eating their income away, the next best thing is to adjust their pay up. Many workers’ wages have been increased starting this June. This is timely because in the last five years, while nominal daily wages for non-agricultural workers have risen, their real wages have actually declined because of inflation. The level dropped from P529.50 to only P486.85. Wage adjustment is also necessary because wages and salaries remain to be the primary source of total family income, as shown by the first semester 2021 Family Income and Expenditure Survey (FIES) of the PSA.

Third is another perennial major concern, that of reducing poverty in the Philippines. One way to look at it is to check the PSA’s survey of the proportion of poor Filipinos whose per capita income is not sufficient to meet their basic food and non-food needs. Between the first half of both 2018 and 2021, the proportion rose from 21.1% to 23.7%, or some 26.14 million Filipinos. The very poor, those who could not even earn enough for their most basic needs, increased from 8.5% to 9.9%, or nearly 11 million people. While the computed Gini Concentration Ratios between 2018 and 2021 show that there was some leveling off in inequality, this was rather too little.

The fourth major concern is creating more jobs. This is the only way by which millions of fixed-income earners could participate in the development process. The two-year pandemic decimated jobs and business activities with its infamous lockdowns. We continue to see the economic scars, especially in the labor market. Between May 2021 and May 2022, the unemployment rate dropped from 7.7% to 6%. However, underemployment actually worsened from 12.3% to 14.5%. More Filipinos would like more hours of work, or additional jobs on the side. The nudge is for the new government to attain more sustainable, self-sustaining, and inclusive growth that would create more quality jobs.

It is easy to see that gut issues on prices, wages, poverty, and jobs weighed more heavily than governance issues like fighting graft and corruption, rule of law, and peace; climate issues like abuse of the environment; and even health issues like control of the pandemic spread. It’s plain and simple gut issues that are at the core of people’s daily struggle. Rule of law and peace, good governance, and even territorial integrity are to be sure equally important but it’s a matter of priority that the survey respondents had to establish their own pecking order.

For the policymakers, a little nudging is strategic because of one bias called salience effect. They would likely notice and focus on the more obvious, the more salient. If Pulse Asia’s survey results make these gut issues more salient, and they are considered important by a lot of people, perhaps we should do this more often so that the right salient issues always get to the top.

The government owes it to the people.

Diwa C. Guinigundo is the former deputy governor for the Monetary and Economics Sector, the Bangko Sentral ng Pilipinas (BSP). He served the BSP for 41 years. In 2001-2003, he was alternate executive director at the International Monetary Fund in Washington, DC. He is the senior pastor of the Fullness of Christ International Ministries in Mandaluyong.