This piece will quickly review some of the fiscal and economic performances of the three leading candidates for President in the coming May 9 elections — Vice-President Leni Robredo, former Senator Bongbong Marcos (BBM), and Manila Mayor Isko Moreno.

THE UPSE ALUMNI, STUDENTS STATEMENT
Ms. Robredo is a graduate of the University of the Philippines School of Economics (UPSE) batch 1986, before she took up Law. More than 400 of her fellow alumni and some 150+ students signed a Manifesto expressing support for her and her running mate Kiko Pangilinan for Vice-President. The signature drive was initiated in early March and cut off was March 31. Alumni range from as old as batch 1968 to batch 2019.

The main reason given by the nearly 600 UPSE alumni and students for their support is that the Leni-Kiko pair is “subok na sa kakayanan at integridad at may track record. Si VP Leni ay ekonomista at isang public interest lawyer…. Si Kiko ay abogado (UP Law batch 1993) at batikang Senador (tested in competence and integrity and has a track record. VP Leni is an economist and a public interest lawyer… Kiko is a lawyer (UP Law batch 1993) and a veteran senator).”

VP Leni has shown that having big agency budgets via big taxes and huge borrowings is not a guarantee of real public service and improving the ordinary Filipinos’ lives. The budget for six years (2017-2022) of the Office of the Vice-President (OVP) was only P0.6 to P0.9 billion a year, always below P1B/year. The total budget for 2022 is P5 trillion, of which the OVP budget is only P0.71 billion, or 0.0001 or 1% of 1%. Thus, for every P100 in total budget, the OVP budget is only P0.01 or 1 centavo. Compare that to the budget of the Office of the President (OP) amounting to P8.24 billion plus discretionary and intelligence funds and other offices of P65.1 billion.

And yet VP Leni was able to inspire confidence and transparency and attracted many private donations during the pandemic that enabled her office to deliver PPEs to many frontline health workers and COVID treatment kits to poor households.

In Table 1, Other Executive Offices (OEO) under the OP include, among others, the Presidential Management Staff (PMS), National Intelligence Coordinating Agency (NICA), National Security Council (NSC), and the Office of the Presidential Adviser on the Peace Process (OPAPP). 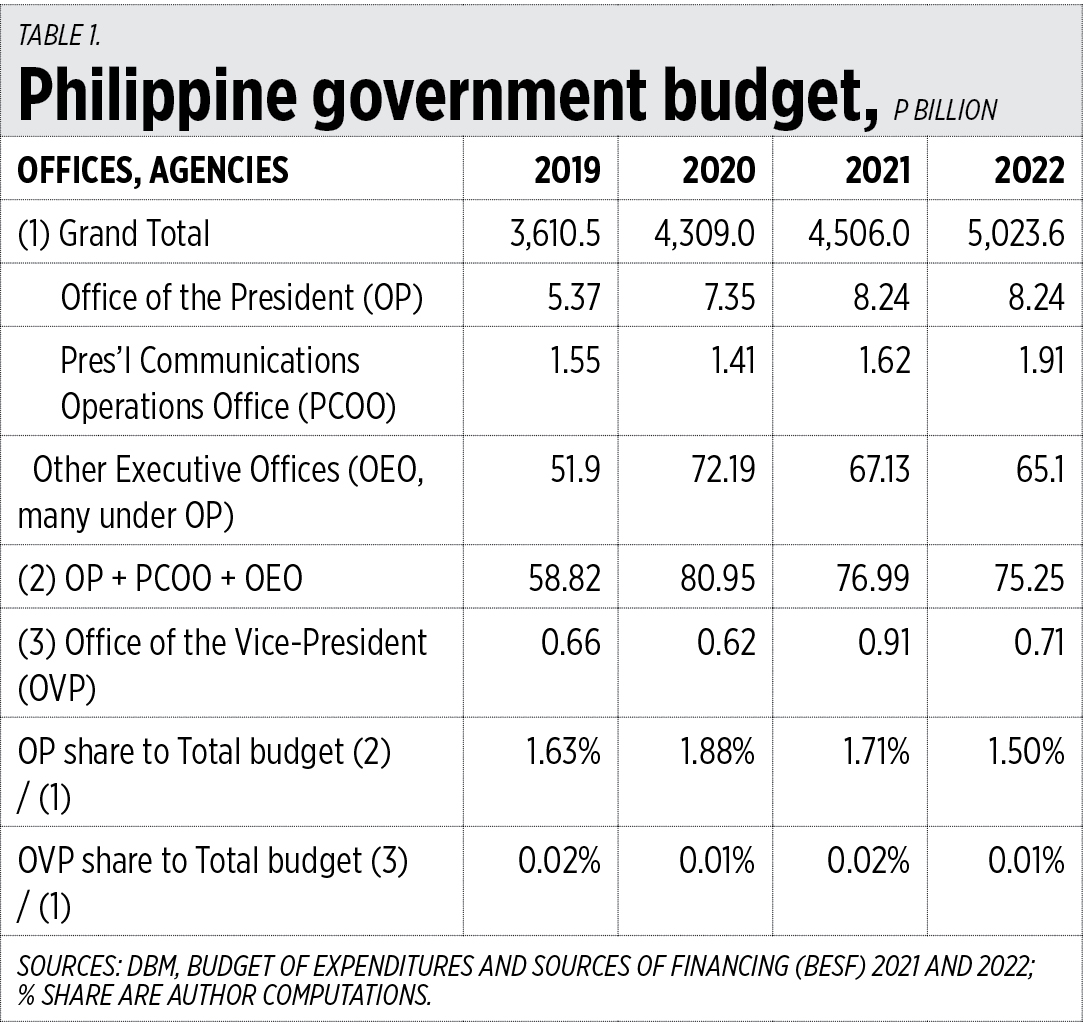 BBM’S NON-ACHIEVEMENT AND PROGRAMS
Of public achievement over the past six years, BBM practically has none. His own official website shows no private business engagement, no government position even as a consultant — 2016-2022 is blank. He just spent the past six years campaigning and revising Philippine history to say that the country had great economic performance, often referred as “the golden years,” under his father’s Presidency from 1966-1985.

So, achievement-wise — zero. Yet he promises plenty of welfarist, bordering on socialistic, programs: 1.) free health insurance for all senior citizens, rich and poor; 2.) subsidized food nationwide via permanent Kadiwa rolling stores in every barangay; 3.) free EDSA Carousel rides all year round; 4.) immunization registry and mass vaccination in every local government unit (LGU); and, 5.) energy rationing by killing all coal plants and use mainly renewables.

He and his running mate Sara Duterte also promise to continue many economic programs of the current administration. Well, the Philippines had a GDP contraction of -9.6% in 2020, the worst in Asia that year and the worst in Philippine economic history since the post-World War 2 era. Public debt also rose big time, from P8.22 trillion (actual and guaranteed) in 2019 to P10.25 trillion in 2020, P12.15 trillion in 2021, and P12.51 as of February 2022. High public debt will require high and multiple taxes. 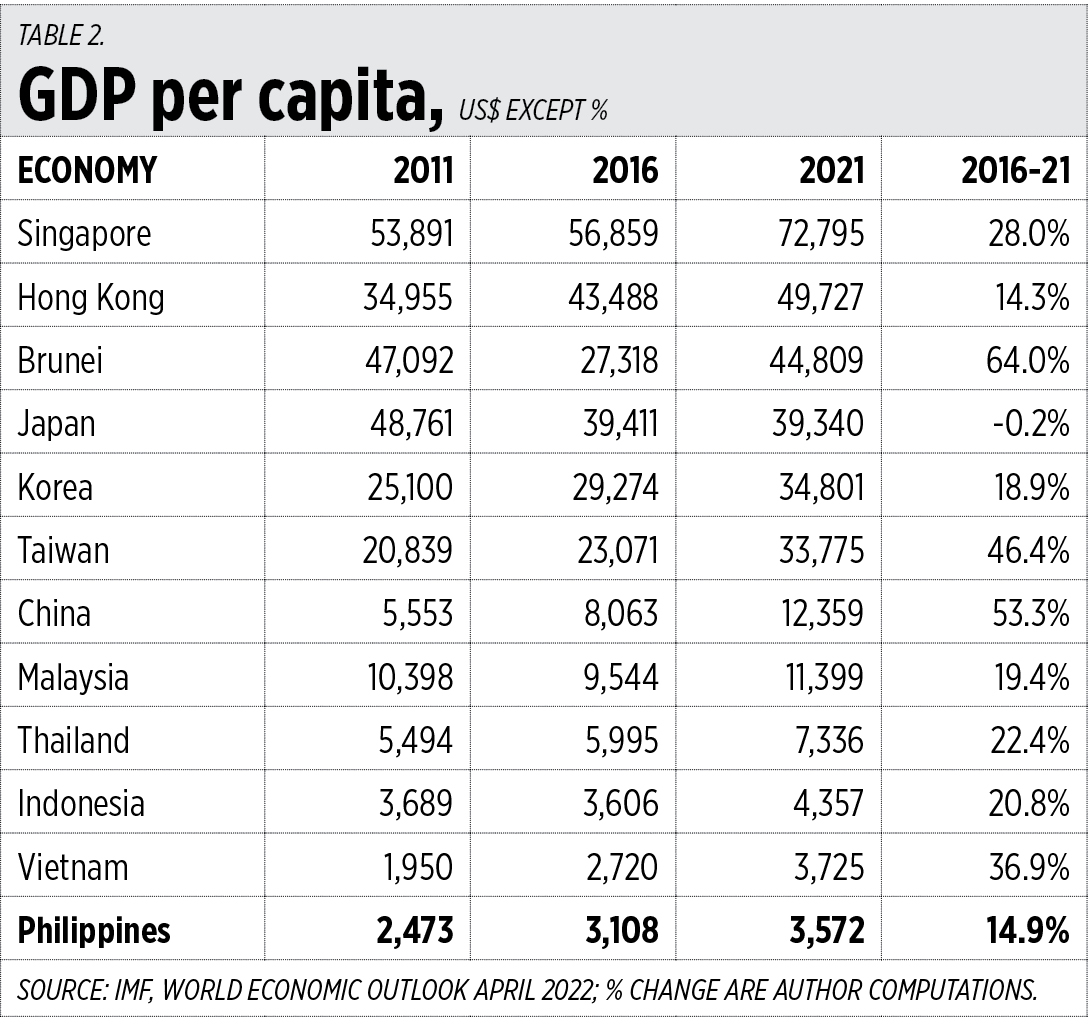 ISKO MORENO’S OVERSPENDING
While VP Leni’s office has an annual budget of only P0.6 to P0.9 billion a year for the past six years, Isko Moreno as Manila Mayor has had expenditures of P30 billion in 2021 and P71 billion in 2022. He is the only Mayor in the National Capital Region (NCR) to undertake annual and large-scale privatization of city assets. Here are the revenues or proceeds from the sale of City government assets: P90 million in 2019, P4.936 billion in 2020, P14.761 billion in 2021, and P44.146 billion in 2022. 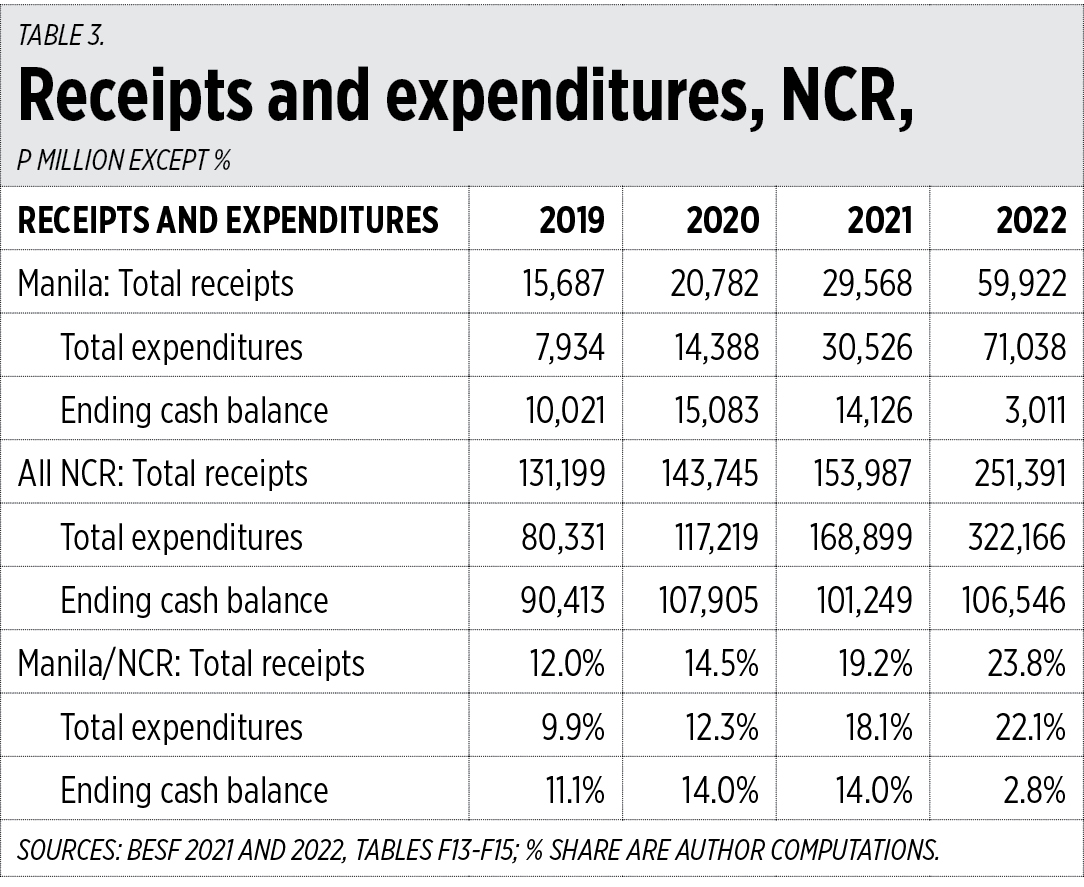 Let’s go back to the quote of Dr. Thomas Sowell. VP Leni is a practitioner of doing public service while given a very small budget and resources. BBM and Isko are the politicians who disregard the lesson of scarcity and just spend huge amounts or promise to spend for huge freebies. These spend-spend-spend politicians will also be the tax-tax-tax authoritarians when they splurge on nationwide public spending. Voters will note this when they cast their votes in two weeks.

The effects of Biden and sanctions on energy and commodity prices