Last week, on April 5, I attended the Philippine Economic Briefing (PEB) at the PICC, a sort of valedictory address by the Duterte administration led by Secretary of Finance Carlos G. Dominguez. The Opening Remarks were given by Executive Secretary Salvador C. Medialdea, then the main report, “The Ship of State Has Been Masterfully Steered,” delivered by Mr. Dominguez, followed by “Monetary, External, and Financial Sector Updates” by Governor of the Bangko Sentral ng Pilipinas (BSP) Benjamin E. Diokno.

Mr. Dominguez emphasized in his report that the “Duterte presidency made the turn towards more inclusive growth and prosperity…. Our 2020 GDP would have plunged deeper by 13.3% instead of 9.6%… The Tax Reform for Acceleration and Inclusion (TRAIN) Law is a crowning achievement of this administration.”

I titled this piece as economic “debriefing” because the comparative regional macroeconomic data do not seem to conform with these claims for the Philippines. And here are some numbers covering the 12 major economies of East and South Asia. Data sources are the IMF World Economic Outlook (WEO) database from October 2021 and the ADB Asian Development Outlook (ADO) from April 2022.

Two, the Philippines is the only economy that experienced a rising inflation rate over the same period, an increase of 0.7% percentage point, while the 11 other economies had zero or declining prices. Our average inflation rate from 2011-2017 of 3.4% was the second highest after India, while our five ASEAN neighbors had only 0.6% to 2.7%.

Three, the Philippines experienced the highest inflation rate of 5.2% among these economies in 2018 — the first year of implementation of the TRAIN law. The next highest inflation was Vietnam’s at 3.5% and lowest was Singapore’s at 0.4% that year. The oil tax hikes Part 1 — diesel from zero to P2.50/liter, gasoline from P4.35/liter to P6.50/liter, etc. — implemented that year triggered a series of commodity price increases, from food to wages and rentals. The diesel tax became P6/liter, gasoline P10/liter, etc. in 2020.

Four, inflation started to creep upwards in March this year to 4% due to the ongoing war in Ukraine and the US-led economic sanctions against Russia that has dragged perhaps the whole world economy into an inflationary spiral (see Table 1). Hence, the clamor by some sectors to suspend or reverse the oil tax hikes of the TRAIN law to help reduce prices in the Philippines. 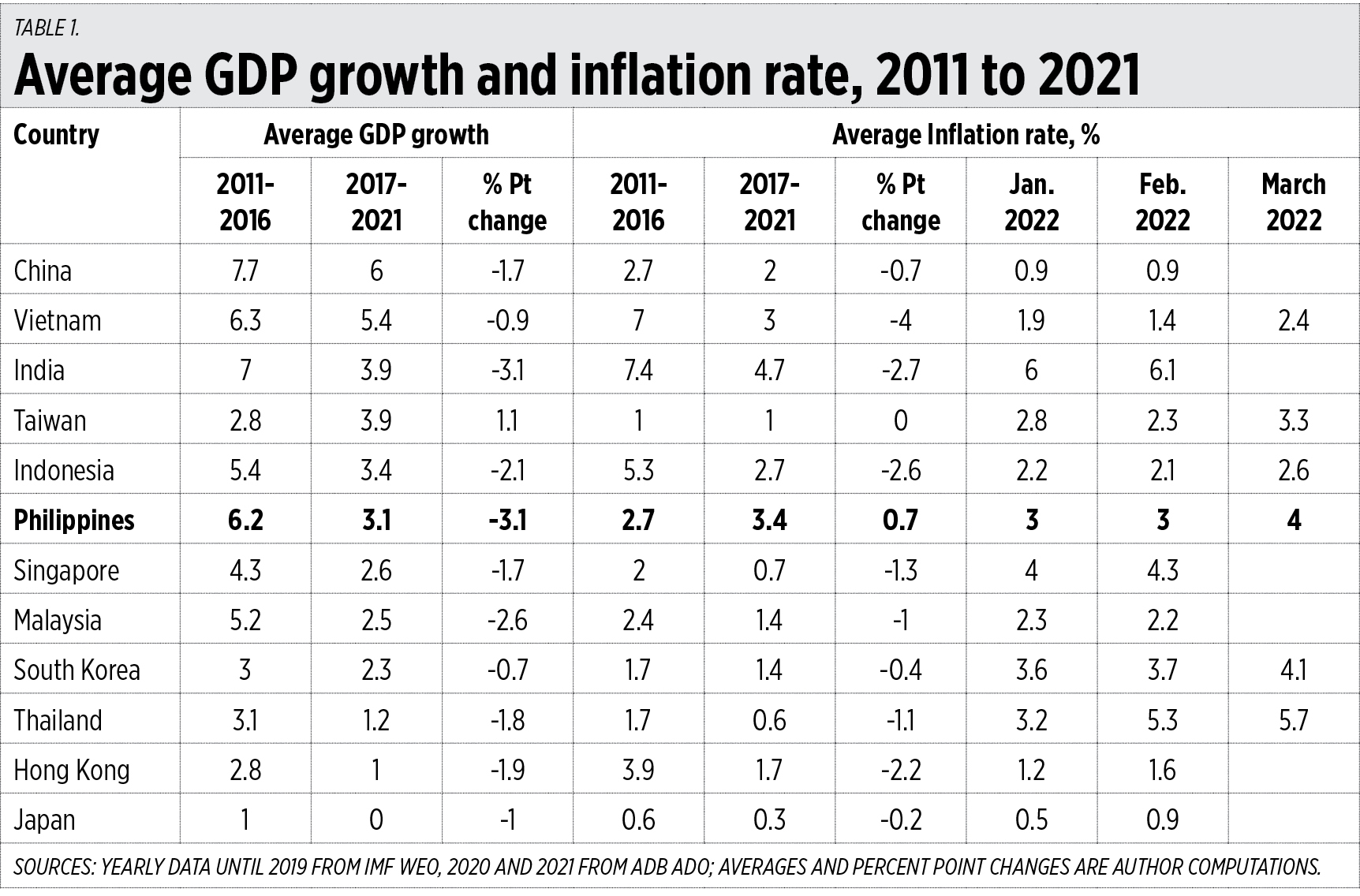 Five, from 2019 to 2021 the Philippines had the second-highest increase of 5.2% in its budget deficit/GDP ratio after Thailand.  The Finance department, Congress, and many sectors of the country were swayed by Keynesian economic thinking — when household and private spending and investment declines, government spending should expand fast to “stimulate” overall demand — a questionable if not unrealistic philosophy in the current world.

Six, the expected “stimulated” rise in demand with high deficit spending did not happen as shown by -9.6% GDP contraction of the Philippines in 2020, the worst since post-WW2. In contrast, Vietnam and Taiwan did not significantly expand their deficit spending and they managed to have GDP growth of 2.9% and 3.4% respectively. This is a slap in the face of Keynesian economics in the last two years.

On the positive side, the Duterte administration should be recognized and credited for some good moves and fiscal reforms. Among these is the new Ease of Doing Business Act, principally initiated by the Department of Trade and Industry under Secretary Ramon Lopez. We need more businesses and job creators, not more bureaucracies.

The BSP under Mr. Diokno has consistently managed our external account. There was a buildup of our gross international reserves (GIR), from $79.2 billion in 2018 to $110.1 billion in 2020 and $108.8 billion in 2021. This was equivalent to about 10 months of imports cover and so we are shielded from any energy imports supply shock because of this huge GIR level. Also, there was the BSP’s Digital Payments Transformation Roadmap that strengthened the digital payment ecosystem.

I saw at the event the new President of Philippine Chamber of Commerce and Industry (PCCI), George Barcelon. Since they are the biggest business organization in the country, I asked him his assessment of the PEB. His response:

“Build, Build, Build initiatives were successful in roads, railways, airports and sea ports all over the country. On tax reforms, TRAIN, CREATE (Corporate Recovery and Tax Incentives for Enterprises Act), the Public Service Act, the Foreign Investment Act, and the Retail Trade liberalization Act, etc. will transform our nation’s ability to attract Foreign Investments and fiscal support for health and education. The private sector was disappointed in the handling of COVID-19 during the initial stages wherein strict quarantine was imposed without stakeholders’ involvement in the decision-making process. But credit goes to the cooperation and discipline of business owners and the general populace. The minor glitches are gaps that can be addressed. The new administration can leverage on the present administration’s ground work.”

If I have to grade the Duterte administration’s overall economic performance in the last six years from 1.0 to 5.0 with 1 as excellent and 5 as failure, just looking at internal figures I will give it a 2.5. But considering the comparative performance of our neighbors in the region, I will give it a 3-3.5: 2.0 in 2017-2019 and 4.5 in 2020-2021 because of its strict prolonged lockdown and mobility restrictions, and implicit mandatory vaccination policy.

Hoping that the next administration will not follow the pitfalls of this government. And to secure change in economic policies in the next six years, the Duterte-allied Bongbong Marcos — Sara Duterte tandem should not win.