The most fervent of Marcos’ supporters will refer to his two-decade-long administration as being a “golden age” for the Philippine economy. They highlight the growth during the martial law years: From 1972 to 1981, the country grew at an average rate of 5.71%.

But from 1965 to 1985, the country’s real GDP only grew at an average annual rate of 3.85%. (See Table 1.) Economists would also argue that the authoritarian political climate, along with insecure property rights, widespread corruption, and unproductive, fraudulent debt led to an inevitable economic collapse. During the final years of the Marcos regime, the economy crashed with negative growth of 7.04% in 1984 and -6.86% in 1985.

The adverse economic impact was so significant and deeply rooted that the Philippines became the “Sick Man of Asia” for two decades. Consistent high growth came only 25 years later during Noynoy Aquino’s term and continued into the Duterte administration (at least for the pre-pandemic period). (See Table 2.) 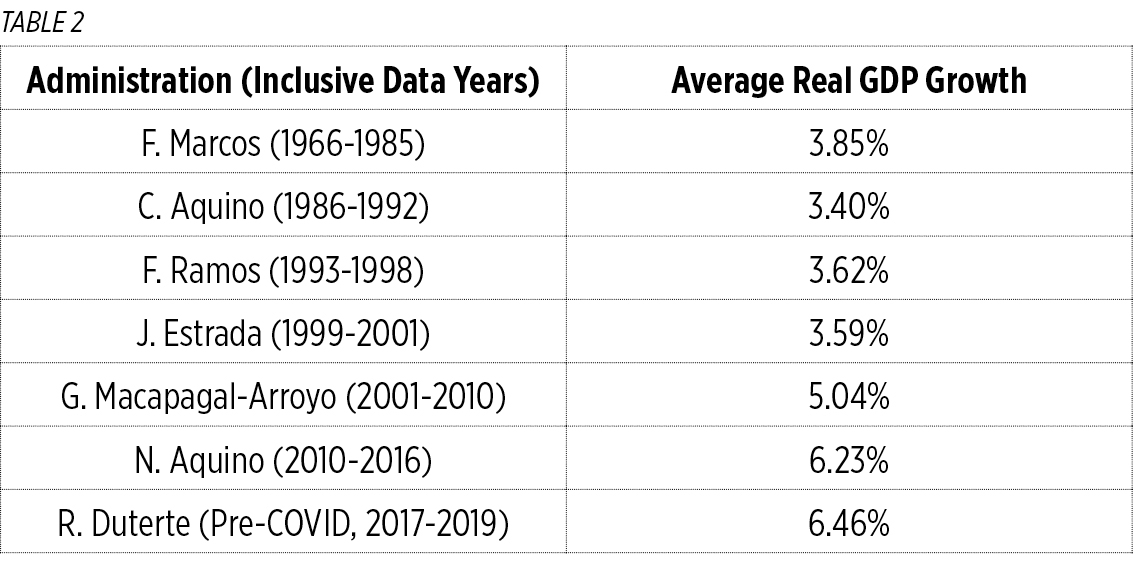 However, Marcos propagandists have been spreading disinformation since the fall of the dictatorship. The Marcos propaganda is falsifying history, including the economic narrative. Presidential candidate Bongbong Marcos’ economic platform is hollow. The crux of his campaign strategy is to conjure up the mythos of his father’s “economic golden age.”

Marcos apologists might squabble over economic data by pointing to above-average growth during martial law. They might cite alternative measures of economic prosperity such as gold reserves, past prices relative to today, or peso-dollar exchange rates. They might also point out external factors, such as global crises and shocks which contributed to the economic downfall.

But the initial growth was superficial and inevitably turned into a disaster. While the evidence unmistakably demonstrates Marcos’ economic failure, one must also evaluate the underlying policies of the late dictator’s supposed golden age. What kind of framework drove Marcos’ economic regime?

MARCOS CRONYISM
When Marcos’ cronyism is brought up, his supporters contend that successful East Asian economies employed a similar economic model of rewarding concessions to select businessmen and entrepreneurs. If this were truly the case, then why did countries like South Korea and Japan manifest economic success and resilience to external crises while the Philippines stagnated and collapsed?

The answer is that Marcos’ economy was fundamentally different from the industrialized counterparts in East Asia. One might mistake the Korean chaebol or Japanese zaibatsu as being comparable to Marcos’ crony conglomerates in the Philippines, but these are completely different animals.

During their industrialization stages, South Korea and Japan provided initial strategic investments, conditional financial support, and temporary trade protections to family-owned conglomerates. A nuance of this industrial policy is that it focused more on strategically weeding out losers rather than simply “picking winners.” The result was globally competitive manufacturing giants such as Hyundai and Samsung in South Korea and Toyota and Sony in Japan.

Contrast this to Marcos who picked cronies in the form of relatives, fraternity brothers, and other close friends and associates to become “winners” by assuming government positions, amassing land, establishing monopolies, and receiving government subsidies and protections. Most of these monopolies were simply milking cows which guaranteed profits for their owners, but were not expected to compete or develop in the long run.

East Asian tigers protected manufacturing firms through industrial policy, but they also subjected these firms to domestic competition and export-oriented discipline. The Philippine situation under Marcos was a stark contrast as crony firms were simply shielded from competition. Marcos’ biggest cronies, like Roberto Benedicto, Danding Cojuangco, and Antonio Floirendo, monopolized the sugar, coconut, and banana markets, respectively. (Note also that these were primary commodities for exports, unlike those in tiger economies which were export manufacturers.)

The result was not a golden age of competitive Filipino industry, but rather the creation of a new group of monopolists, some of whom still maintain economic influence in the country to this day.

DEBT-DRIVEN GROWTH, MISPLACED PRIORITIES, AND PROFLIGATE SPENDING
An ostensible function that such cronyism served was to appease the elites in order to maintain a political foothold. A similar motivation was behind the big-ticket construction projects such as cultural centers, luxury hotels, and other tourist attractions. These edifices may have carried the optics of progress and served as political propaganda but did very little towards the country’s long-term development. Even worse is the fact that these exorbitant projects were funded through large foreign loans.

The most egregious of the foreign debt was the $2.1-billion Bataan Nuclear Power Plant loan. The transaction was marked by fraud (overpricing and commissions) and was deemed unsafe (unmet specifications).

Aside from wasteful pet projects, resources were funneled towards personal extravagance. A vivid example of this was Marcos’ takeover of Philippine Airlines (PAL) in 1972. One American news outlet documented how Imelda Marcos is alleged to have racked up an unpaid personal bill to PAL worth over $3 million. British writer Caroline Kennedy, who personally knew the Marcoses, recounted how Imee Marcos had used PAL to deliver her breast milk to her son in Manila while she was vacationing in Europe. Marcos had turned the country’s flagship airline into a glorified personal transportation service.

The fraudulent, unproductive loans, wasteful spending, and the high interest rates, exacerbated by the assassination of Ninoy Aquino, caused the crisis and the bankruptcy of the country’s Central Bank in 1983. The Marcos’ debts remained a burden for generations of taxpayers to come. By 1986, the country’s debt obligations amounted to over 57% of GDP — nearly 40 percentage points higher than the 18.7% debt ratio recorded just 10 years earlier.

THE HIDDEN SIDE: CORRUPTION, WASTE, AND FAMINE
A striking feature of the Marcos economy was how the enrichment of cronies clearly contrasted with worsening economic conditions for the rest of the population. By the end of the Marcos regime in 1985, poverty incidence was estimated to be 44.2% — nearly half of Filipinos were impoverished!

The coconut industry served as a primary source of exports along with sugar. In 1973, Marcos established the Philippine Coconut Authority (PCA) and created the Coconut Industry Investment Fund (CIIF). This coco levy fund, which was sourced from a tax on coconut farmers, was intended to “promote the rapid integrated development and growth of the coconut industry.”

Instead of benefiting farmers, however, the fund was used by Danding Cojuangco to purchase shares of the San Miguel Corp. (SMC) as well as six oil mills. Cojuangco, who had a close relationship with Marcos, channeled the funds through the United Coconut Planters Bank (UCPB). By 1982, it was estimated that a cumulative P70 billion had been paid by coconut farmers through the levy. So, while coconut farmers and the agricultural sector at-large remained mired in poverty, Cojuangco went on to become one of the wealthiest and most powerful businessmen in the country.

Consider also the Negros famine that occurred in 1984-85. In the mid-1970s the local sugar industry had already been feeling the adverse effects of global market forces and Marcosian cronyism only served to make the industry more fragile and accelerate its collapse.

In 1974, Marcos appointed Roberto Benedicto to be the chief of the National Sugar Trading Corp. (Nasutra) as well as the Philippine Sugar Commission (Philsucom). This made Benedicto preside over the sugar monopoly. However, instead of helping local sugar farmers to diversify their livelihoods and become more viable, Benedicto gambled on higher future sugar prices and hoarded large stocks of sugar looking to sell them at a profit later on.

The sugar market crashed and the resulting losses from having to sell the underpriced sugar hoards were passed on to the farmers. This led to massive unemployment and crippling debt, and widespread hunger. During that period, an estimated 40% of children under 14 in Negros or about 350,000 children suffered from malnutrition. Infant deaths shot up by 67% from 1984 to 1985.

Once the layers of outward extravagance and artificial prosperity are peeled, they reveal widespread corruption and cronyism, unsustainable debt, heightened poverty, and economic bust. All that is the rotten core of Marcos’ economic legacy.

AJ Montesa is a research associate of Action for Economic Reforms.

COVID-19 and the candidates