Even before Russia invaded Ukraine on Feb. 24, coal and gas prices were already high in 2020 and 2021 compared to 2019. Oil prices were lower in 2020 but increased in 2021. The main reason is high demand for these fossil fuel products compared to supply, despite continuing global narratives of “decarbonization” and “net zero.”

HIGH PRICES FOR FOSSIL FUELS, CONTRACTION FOR WIND-SOLAR
Peak prices of fossil fuel products in 2021 compared to end-2020 levels were 235% higher for coal (Newscastle, Australia), 700% for UK gas, and 840% for TTF/EU gas. Huge. And this was before the Russia invasion.

When Russian fighter planes and tanks entered Ukraine, oil prices quickly touched the $100/barrel mark, EU gas prices were up to 50% than their previous day level. But prices retreated many hours later because gas flows from Russia pipelines continued unhampered as if there was no war. By Friday, Feb. 25, closing trade, oil and gas prices were only 19% to 27% higher than end-2021 level. Coal was 41% higher (See Table 1). 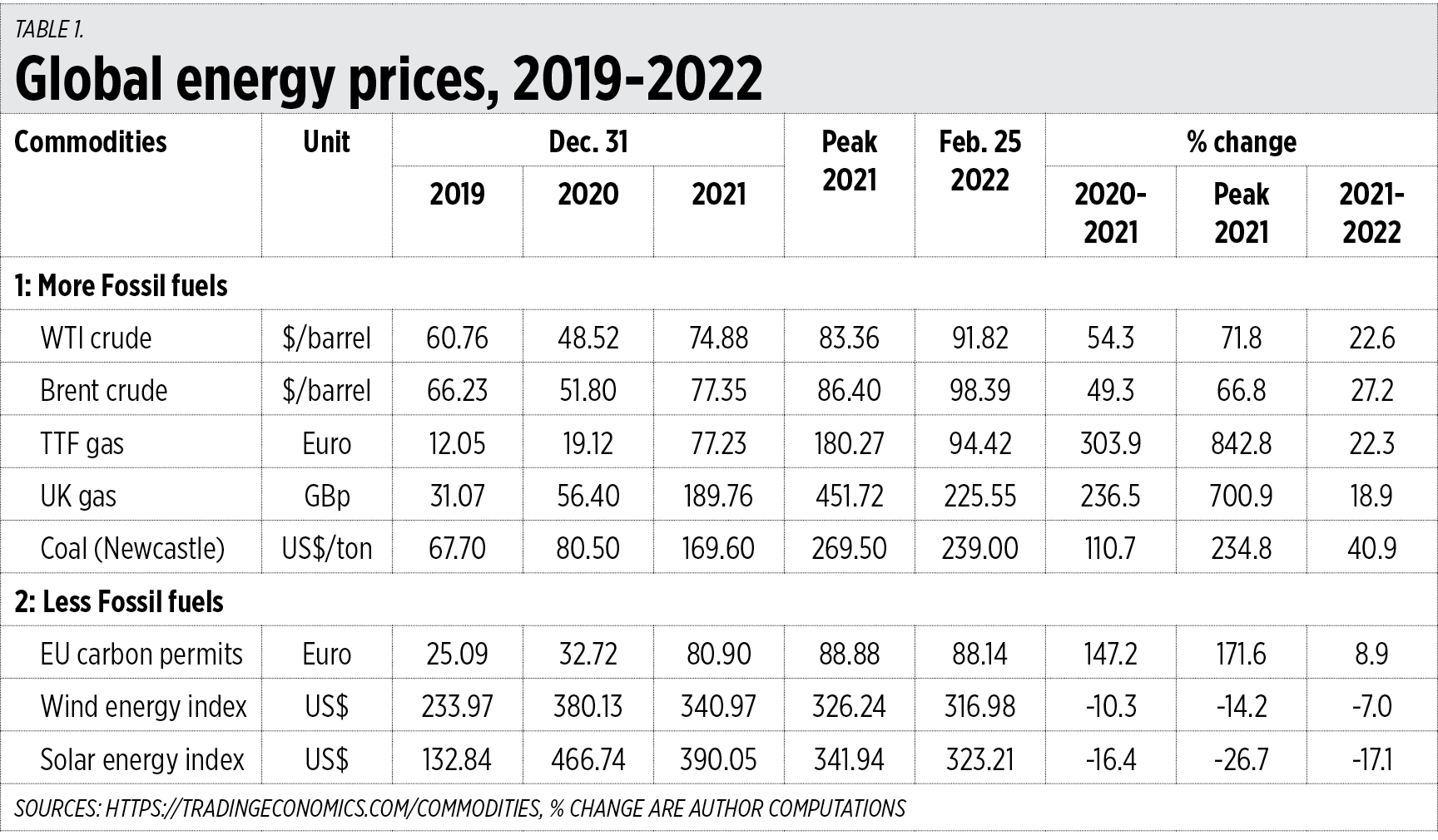 Notice that both the solar index and wind index experienced contractions in 2021 compared to 2020, and even until this February. Meaning investors were unimpressed by their profitability, being intermittent as Europe experienced calm, less windy weather last year and early this year.

The EU carbon permits, however, kept rising. Meaning a double whammy for customers because they pay higher oil-gas-coal prices to keep the lights on, plus a de facto carbon tax that electricity companies pass on to them.

As of this writing, Monday morning, oil prices are up again, WTI at $96/barrel and Brent at $102/barrel. The initial optimism of short war seems to have dissipated.

GLOBAL ECONOMIC IMPACT OF THE WAR
Russia is the world’s 11th largest economy in terms of GDP size, a major producer and exporter of oil, gas, and coal, and has the world’s 9th biggest population. So, if it is involved in a war, it will have a significant impact on the global economy.

Ukraine, on the other hand, is the world’s 55th largest economy and its GDP size is only 1/10 of Russia. Its population is the 34th largest in the world but nearly ¼ that of Russia. So, a destabilized Ukraine will not have a major global economic impact. For watchers of the China-Taiwan conflict, see also their respective numbers (Table 2).

The main impact of the war, aside from energy supply destabilization, will be on inflation as energy prices go up, and on trade and investments as financial sanctions imposed by the US and other major economies via the removal from the SWIFT messaging system of “selected Russian banks,” meaning they will be disconnected from the international financial system and partly disable them from operating globally. The Russia central bank is also restricted from mobilizing its international reserves. Corollary adverse impact will be on tourism and the mobility of people as some flights in Europe are diverted to avoid the respective airspaces of Russia and neighboring countries.

The worst-case scenario will be a halt in the flow of Russian gas and oil to neighboring European and other countries when the financial sanctions become more severe. And many European countries will go dark, manufacturing and services will slow to a crawl, and there will be no heating for households in the middle of winter as they rely on Russia for a big portion of their heating and electricity. Then recession will be a certainty. And given the huge volume of trade and investment between Europe and the US, this will have spillover effects in the US too. We hope this will not happen.

THE PHILIPPINES’ ENERGY MIX
Avoiding the European situation of rising reliance on wind and solar — which deliver little or zero power when the wind does not blow or the sun is down in the evening or it is very cloudy during daytime — should be a goal for developing economies.

The good news about the Philippines power generation mix is that despite the flat output from 2010 to 2020 from Malampaya’s natural gas and conventional renewables like hydro and geothermal, coal output has more than doubled and spared the country from the regular, daily Earth Hours that we experienced in 1990-1991.

Variable intermittent renewables, solar-wind output has been increasing, from zero in 2010 to 2.4% of total generation in 2020, and 3% in 2021. Still, this is an almost insignificant contribution to keeping our lights and machines on (Table 3). 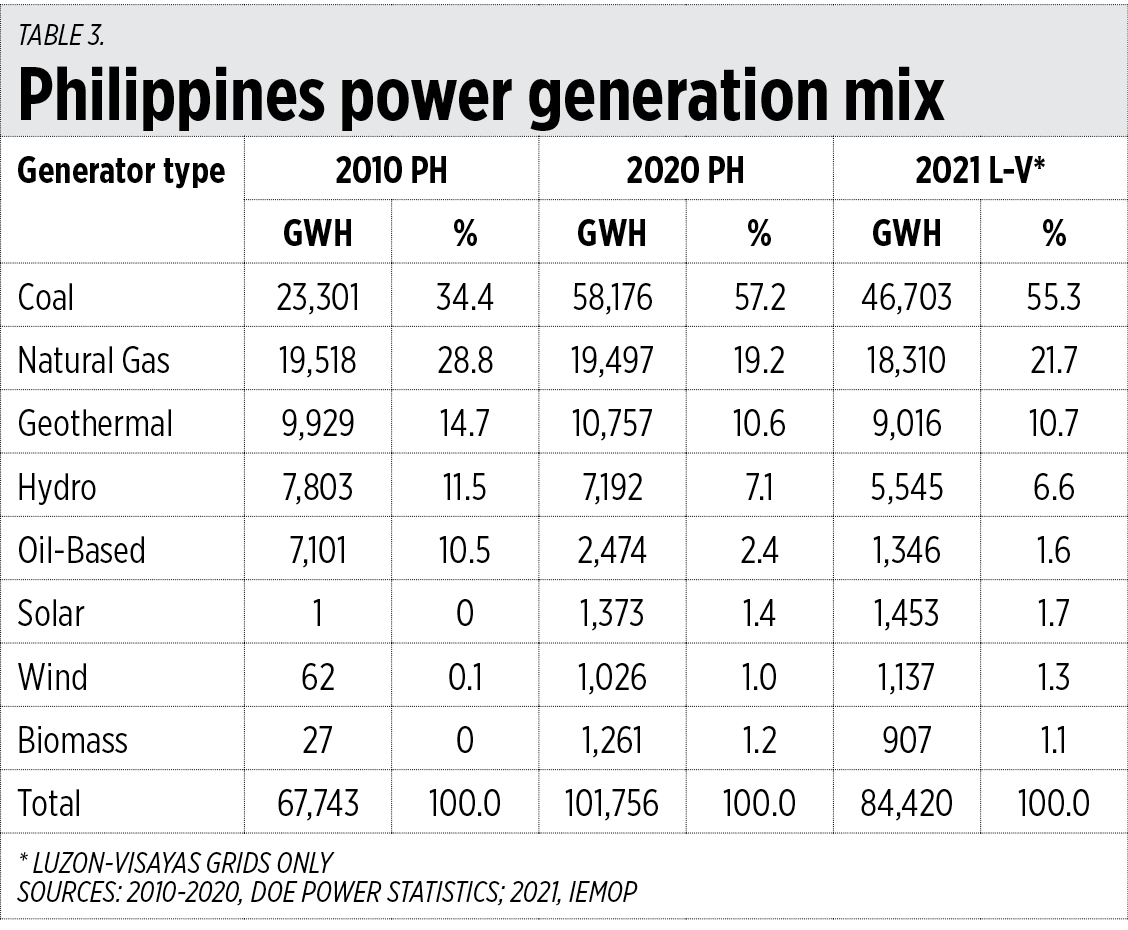 The bad news for the Philippines though is that our total power generation remains small compared to our significant neighbors in the ASEAN. In 2020, while the Philippines generated 102 terawatt-hours (TWH), Malaysia generated 160 TWH, Thailand 176 TWH, Vietnam 234 TWH, and Indonesia 275 TWH.

The implication here is that foreign investors with huge manufacturing or commercial projects will think twice before coming here due to our low power generation capacity and would prefer to locate instead in our ASEAN neighbors. The challenge is posed for all players in the sector — the competitive generation companies, the national transmission monopoly (the National Grid Corporation of the Philippines or NGCP), the geographical distribution monopolies (electric cooperatives and private distribution utilities) and competitive retail electricity supply.

There are many solar-wind power projects being constructed now and coming into the grid from 2022 onwards. I hope that these will be mainly for contestable customers with specific and customized demand for renewables, for their corporate and environmental, social, and governance (ESG) imaging.

LOWER ELECTRICITY PRICES DESPITE RISING OIL PRICES
At the Independent Electricity Market Operator of the Philippines (IEMOP) media briefing today, they reported that spot prices have declined from P7.07/kWh in the January billing to P6.09/kWh in the February billing. Good.

This is similar to the decline in Meralco billing (all-in from generation to transmission, distribution, supply charges, FIT-All, taxes, etc.) from P9.78/kWh last December to P9.70/kWh last January and P9.58/kWh in this February billing. Meanwhile, unleaded gasoline was rising from P61.20/liter on Dec. 21 last year to P64.20/liter on Jan. 22 and P67.62/liter on Feb. 22. Also good.

Energy is development. Sustained growth and development require more energy — cheap, competitive, stable, reliable, dispatchable on demand, no blackouts even for a minute — to further modernize our production system and enable us to live bright and comfortable lives. We should stay the course of ever-expanding our conventional energy sources for our baseload power needs, and leave the intermittent, weather-dependent solar-wind for certain customers with specific environmental and corporate needs.

Trump energy policies and the US elections

Mining attractiveness index and the Philippines