Recently, the words “water crisis” in Metro Manila and surrounding provinces have resurfaced, as they did in April-June 2019.

See for instance these recent reports in BusinessWorld:

• “Metro Manila water shortage projected for April or May” (Feb. 8),

SOLUTIONS TO A ‘WATER CRISIS’
There are short- and medium-term solutions to expand potable water supply as the population in the metropolis expands.

One is the development of dams in the Sierra Madre mountains and diverting some of the water that freely drains into the Pacific Ocean, to Metro Manila and surrounding areas. The Kaliwa Dam is meant for this purpose. But instead of doing the usual Public Private Partnership (PPP), the Duterte administration decided to go back to old-style taxpayers-funded projects via foreign loans, in this case a China loan with China construction companies. See this column’s previous piece, https://www.bworldonline.com/integrated-ppp-vs-hybrid-ppp-the-case-of-kaliwa-dam/ (Nov. 7, 2018).

Third is to further develop Laguna Lake, or Laguna de Bay, as a potable water source. There are other sources but Laguna Lake is the biggest as it is the natural drain of 100 rivers and creeks and 21 major tributaries.

PROBLEMS IN TAPPING POTABLE WATER FROM LAGUNA LAKE
Among the challenges of tapping the lake are: One, the water is murky, heavily silted, and in certain areas is of bad quality — with high levels of biochemical oxygen demand (BOD), dissolved oxygen, and fecal coliform. So, the cost of treatment goes up, which means water prices can go up.

Two is entry of salt water during the dry months when the lake water level is lower than sea level due to evaporation, and dirty water from Manila Bay enters into the lake during high tide. This raises the salinity level and, again, results in a higher cost of treatment.

Three is the huge number of fish pens and fish cages — covering tens of thousands of hectares — which trap some solid waste from flowing out and contribute to siltation and a shallower lake.

DREDGING THE LAKE
One important solution to these three problems is large-scale dredging of the lake. Make it deeper, from the current 2.5 meters average depth to three meters or so, to allow the lake to hold a bigger volume of fresh water. But this will require the demolition of many fish pens and those pens are owned by individuals and businesses with wide political connections.

I want to quantify the potential benefits to households and businesses when there is a big volume of new water supply from the lake.

In a paper “How Much Water Do Households Require?” (by Inocencio, Padilla, and Javier, Philippine Institute for Development Studies, October 1999), they computed that the average requirement in Metro Manila and Pangasinan in 1998 was 54 liters per capita per day (l/c/d) — 23 for bathing, handwashing, teeth brushing; 20 for house cleaning, toilet flushing; five for laundry; four for cooking and dishwashing; and two for drinking.

Today, more households have vehicles that need cleaning too, plus pets, and many residential condos and subdivision clubhouses have swimming pools. It is safe to assume a 20% increase in water demand compared to 1998 or 24 years ago, so the new demand would be 65 l/c/d.

WHICH IS MORE IMPORTANT, FISHERY OR POTABLE WATER?
This seems to be a no-brainer question because potable water is life. But individual and corporate fishermen in Laguna Lake will insist on the importance of fishing to people’s lives and livelihood.

The Philippine Statistics Authority (PSA) has “Water Accounts of the Philippines” data and among the key concepts is water use efficiency (WUE) computed as gross value added (GVA, in P Billion) over water use (in billion cubic meters). Agriculture includes fishery, Industry includes water, electricity, manufacturing. The WUE of industry including water is 30x that of WUE of agriculture and fishery (Table 2). 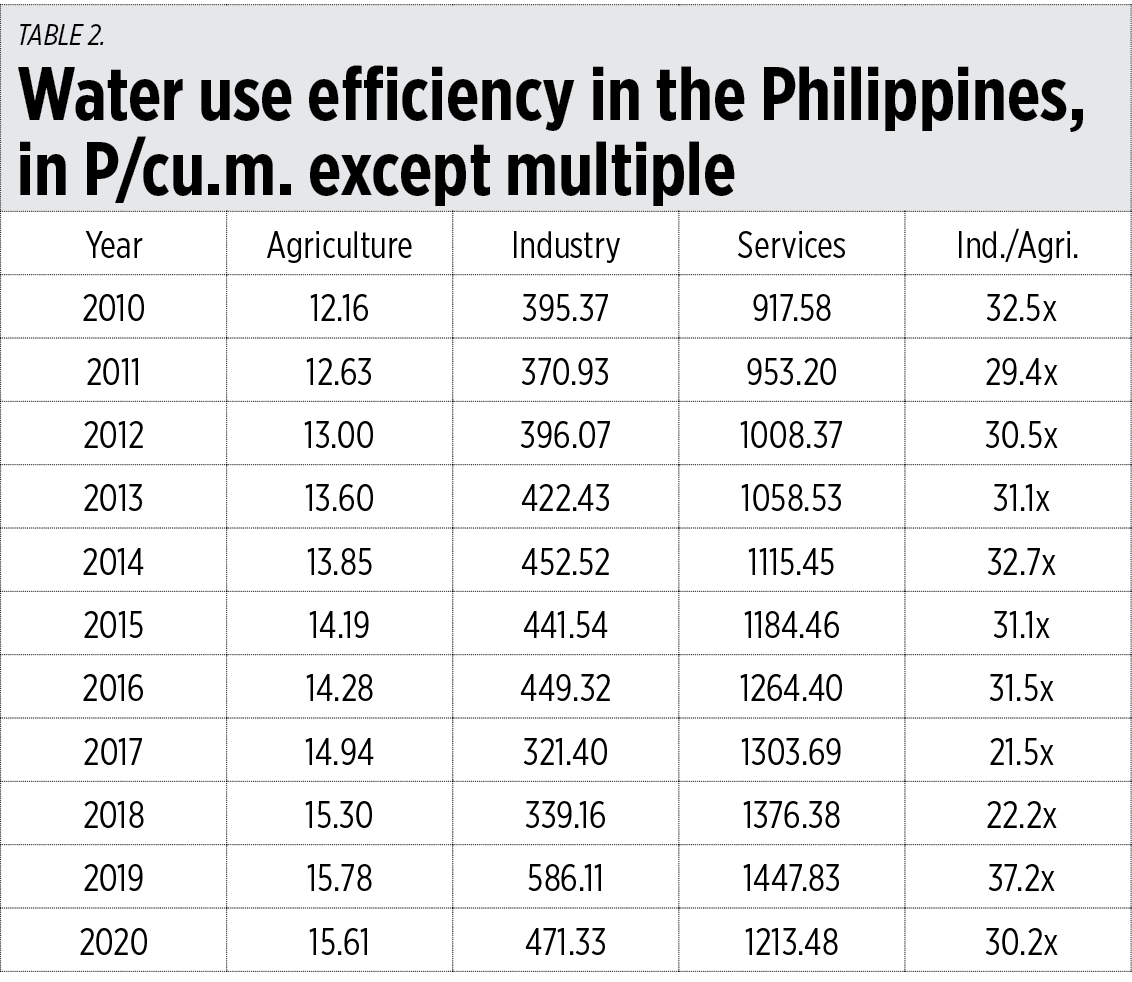 CURRENT POTABLE WATER FROM LAGUNA LAKE
Currently, MWSI (Maynilad) has two operating water treatment plants in Muntinlupa and harvests 300 million liters per day (mlpd) from the lake, serving around 1.2 million customers in the southern part of its concession area. In 2021 it started the construction of another treatment plan, designed to produce 150 mlpd of potable water to serve more customers in Cavite.

MWCI started tapping water from the lake in 2019 from its Cardona Water Treatment Plant in Rizal, harvesting 100 mlpd.

Potable piped water is very important yet it is very cheap. One cubic meter (cu.m.) is 1,000 liters. One drum of water is 208 liters, so one cu.m. is nearly five drums. At the time when the President was lambasting the two water concessionaires, the water rate was only P6.13/cu.m. and P9.63/cu.m. basic charges per month in Manila Water and Maynilad areas respectively. For consumption of 11 to 20 cu.m. per month, customers pay only P11.13/cu.m. and P16.42/cu.m. for Manila and Maynilad areas, respectively. See this column’s piece at https://www.bworldonline.com/thank-you-maynilad-manila-water/ (Dec. 23, 2019).

The two firms have become so efficient in delivering water that despite the low rates charged for household consumers, they were still able to generate huge revenues and net income, reinvested to further improve water delivery efficiency (Table 3). 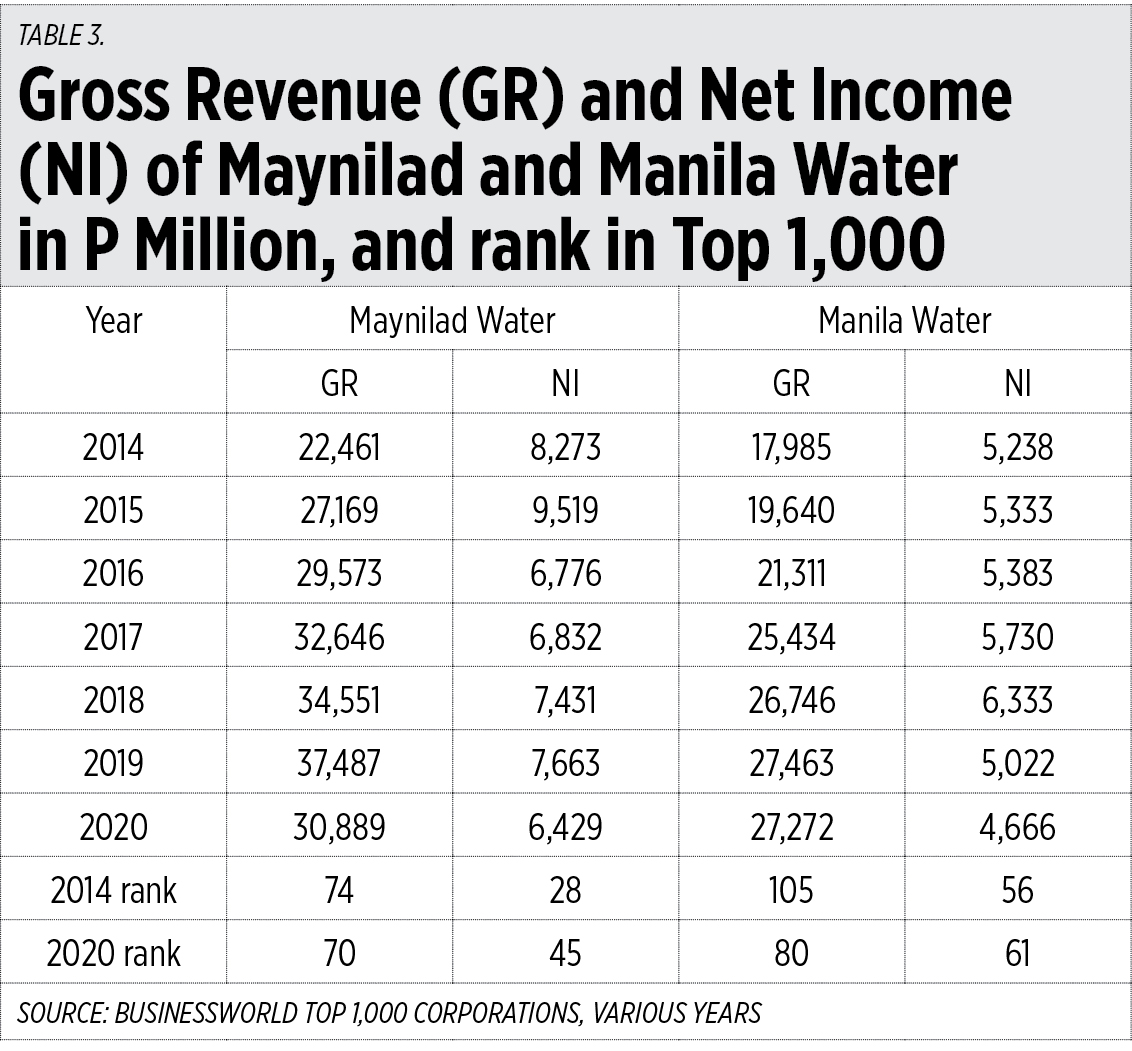 There. The potential benefits of dredging the lake — which will require demolition of many fish pens and fish cages — have been quantified. The higher efficiency of potable water use than fishery use has been established.

Dredging the lake to increase its fresh water holding capacity, and removing structures that trap solid waste from flowing out, are necessary so that we avoid the seemingly annual threat of a “water crisis.”

Juniors standout Eala through to US Open quarterfinals