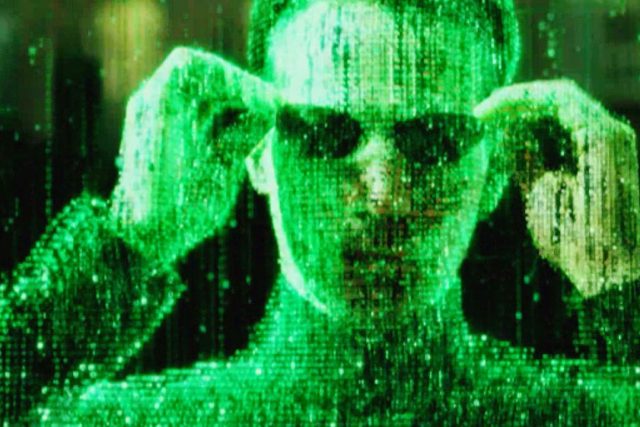 The Matrix is among the most influential science fiction films of all time. Nearly 20 years since the third film in the series premiered, a fourth chapter, The Matrix Resurrections, was released in December to great excitement.

But one of The Matrix’s most enduring cultural contributions has been to conspiracy theories. Motifs from the film have been adopted by online groups to reinforce their messages, which are often hateful and violent. Incels, or involuntary celibates, are particularly engaged with Matrix-style “philosophy.” A mass shooter in the UK, for example, was found, after his death, to have been using Matrix imagery in online discussion forums before committing his crimes.

The problem is so widespread that the new Matrix film is being taken by some as a rejection of the trend. Ahead of the film’s release, two of its writers described themselves as approaching the movie with the intent of reclaiming the “red pill” trope from its hijackers.

The idea of the red pill is a key example. In the original Matrix, the protagonist is invited to choose between a red and blue pill. The red reveals the world for what it truly is; an artificial construct of machines which have enslaved humanity. The blue allows the protagonist to remain in a comfortable delusion; spared from facing the horrors beyond. This cultural motif is now a cornerstone of conspiratorial thinking.

Red pill conspiracy theories follow the same basic logic. A nefarious enemy is working behind the scenes, having concealed their harmful activities from the population. By “taking the red pill” believers “wake up” to this truth.

It is perhaps ironic that in the film the red pill reveals reality for what it truly is while in conspiracy theories it allows adherents to construct their own reality — one which tends to reinforce and rationalize their own preconceptions.

To demonstrate, take the online “manosphere,” a loosely affiliated network of misogynistic groups united by a shared red pill conspiracy theory. They see feminism as having corrupted socio-political institutions and established a society structured to the advantage of women and the detriment of men. Feminism, or the myth of female oppression in their eyes, is a means to trick men into accepting exploitation and ceding ever more power. In “taking the red pill” manosphere adherents believe they are awake to this inequitable world order. They see themselves as a resistance movement against it.

The danger of red pill narratives is the type of thinking it imparts. Within these narratives “truth” is presupposed rather than tested. Facts must conform to this truth to be legitimate, and all contrary evidence is dismissed. Inevitably such communities become insular, seeing the outside world as brainwashed and themselves as uniquely virtuous for having the strength of character to face reality.

Red pill narratives naturally encourage echo chambers, which are an ideal environment for radicalization. Shared narratives can quickly diverge from reality when left unchallenged. Eventually the positions and beliefs of the community only make sense in the worlds which adherents have constructed for themselves.

There are many other examples beyond incel culture, and they should strike a foreboding chord. In worlds corrupted by unseen forces, radical action is easily justified. Conspiracy theories paved the way for last year’s attack on the US Capitol, and continue to inflame tensions a year on. The idea of being duped by the mainstream is evident in much anti-vax thinking. In the often-competing worlds of conspiracy theorists, drinking urine or injecting bleach are variously presented as the real cures for COVID-19 rather than the vaccines developed by governments in a bid to control their populations.

But is The Matrix to blame for modern conspiratorial thinking? No. Narratives of malevolent hands pulling strings behind the scenes are far older, and deeply tied to antisemitism. In early-1900s conspiracy theories, which would later fuel the rise of Nazism, it was claimed a cabal of Jewish elders were infiltrating and corrupting social institutions in a plot for global dominion. Central to Nazi ideology was the theory of “Jewish-Bolshevism,” which held Jews invented communism as a means of world conquest. Hitler even believed the British people would become his staunch allies if only they destroyed the “Judaic forces” controlling them. Echoes of contemporary red pill narratives underpinned all these beliefs; for this type of thinking long predates the specific motif.

It would be more accurate to say The Matrix has popularized a superficially similar metaphor. It simplified, if not standardized, the way in which these theories could be communicated to modern audiences. These days, conspiracy theorists can simply point to The Matrix as a framework rather than explain their worldview in their own words. The red pill is essentially a way of saying “it’s just like The Matrix,” but the real enemy is [x]. This is of course an unintended consequence. But after 20 years, the genie is probably not going back in the bottle.

Charlie Tye is a PHD candidate, York Law School, University of York. He receives funding from the Morrell Centre for Legal and Political Philosophy.

Red Lions double on Knights but not after another scare