Rolling blackout due to the tight power supply started already in Europe on Dec. 23, in Kosovo then Serbia. There were also power supply warnings in the United Kingdom, while France’s nuclear power output has declined significantly and they must get power from somewhere else.

The continent experienced calm weather over the past several months so wind output was low and power supply was tight, bordering on blackouts as early as September this year. So, they shifted to natural gas and prices jumped through the roof — from only €19.12 on Dec. 31, 2020 to €180.27 on Dec. 21 this year, 9.4 times higher than the 2020 mark or an 843% hike.

BLACKOUT ECONOMICS
Blackout economics is the policy of shrinking the supply of stable, reliable, dispatchable power while raising the supply of unstable, unreliable, intermittent power like wind and solar, leading to stretched and thin reserves while demand rises. It is a deliberate move to invite blackouts while consistently raising power prices.

The biggest practitioner of blackout economics would be the biggest economy of Europe, Germany. Despite this tight power supply and very high gas prices, Germany, which had 17 nuclear power plants until 2011, will close three of its six remaining nuclear power plants at the end of this month — that’s next week — then close the last three by December 2022. In addition, they will also close all coal power plants by 2030.

Germany’s new government, led by the political socialist Social Democratic Party (SPD) and the environmental socialist Greens party, hastened this irrational energy transition. The pro-business, pro-market Free Democratic Party (FDP) that joined the coalition has been compromised by the socialistic energy agenda of its two partners.

This should not be the case because the world has a huge supply of conventional power like natural gas and coal both for the present and future.

HIGH RESERVES/PRODUCTION (R/P) RATIO
Many countries have abundant reserves on the ground such that if they continue their current yearly production for domestic and the export markets, their reserves/production (R/P) ratio will last for hundreds of years. The proven natural gas reserves in Russia are 37,392 billion cubic meters (BCM) and 12,619 BCM in the US. The R/P ratio for natural gas is 334 years in Venezuela, 231 years in Turkmenistan, 144 years in Qatar, and 128 years in Iran. 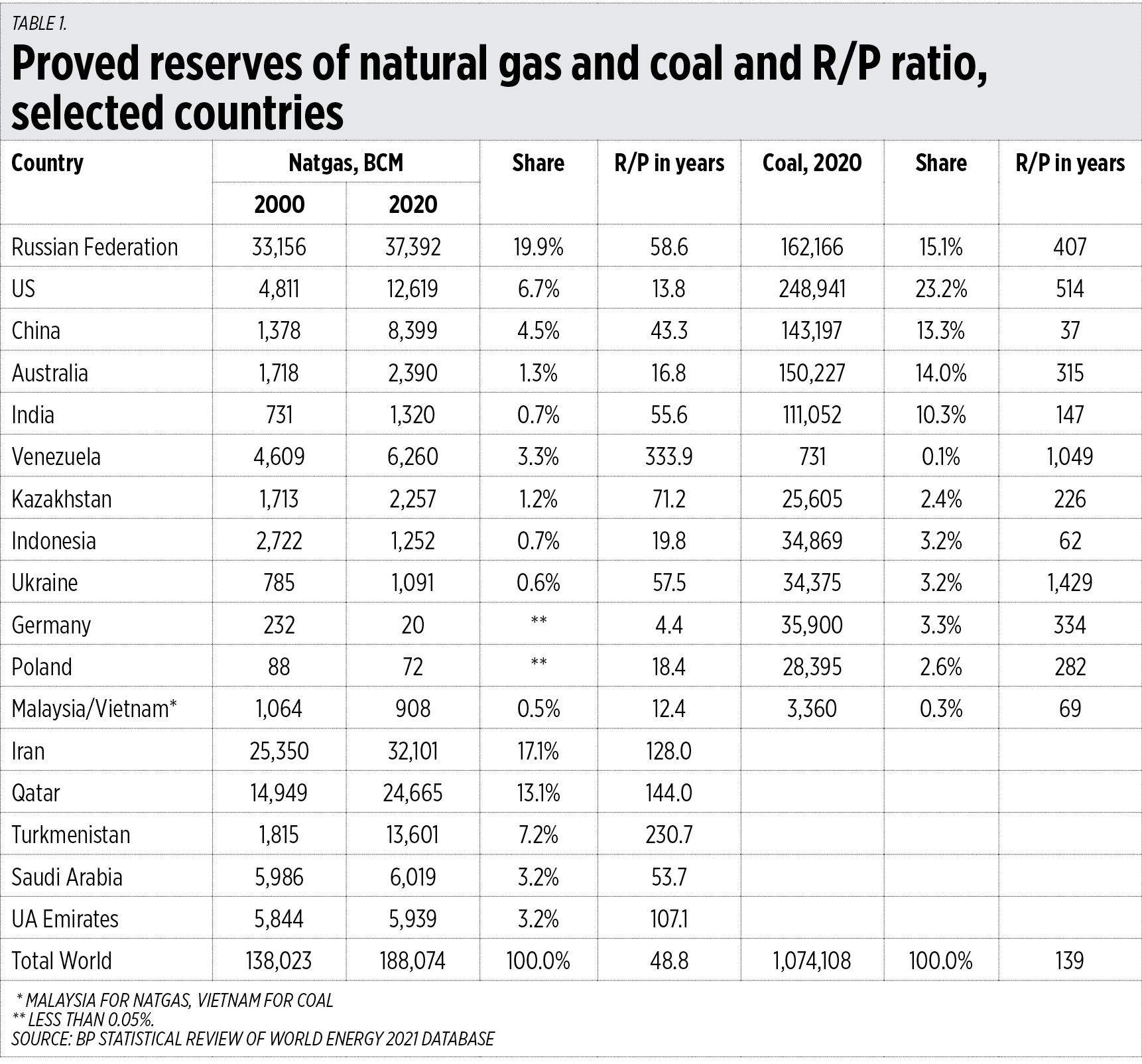 BROWNOUT PATHWAY FOR THE PHILIPPINES
A power blackout is the complete outage or shutdown of electricity due to strong storms, and very low supply on days and hours with high demand. A brownout is a partial outage of electricity, when the system capacity and voltages are reduced by at least 10-25%.

Consider these four reports in BusinessWorld this month:

The first two reports are related. More unstable and intermittent renewable energy (RE) like 10,935 MW of wind and 4,251 MW of solar will be added in the coming years, with only one coal plant (300 MW in San Carlos City, Negros Occidental) and one huge LNG plant (6,492-MW in Navotas by San Miguel Electric Corp.) having obtained clearance from the Department of Energy (DoE). The Philippines signed up with the Organization for Economic Cooperation and Development (OECD) Clean Energy Finance and Investment Mobilization (CEFIM) Program that will push more intermittent RE in the country’s grid.

This could be the main reason why PSALM was given P16 billion by Congress for 2021 and 2022 (see this column on Sept. 13, https://www.bworldonline.com/adbs-kill-coal-plan-government-corporations-and-power-transmission/). Taxpayers nationwide will pay for the loans of these two electric cooperatives which may have no intention of paying, and plunge their customers into darkness if their abuses are not tolerated further.

The last report is about Meralco’s plan to get peaking plant power supply covering Feb. 26 to July 25, 2022 to protect itself and its customers from potential blackouts and price surges in the Wholesale Electricity Spot Market (WESM) over those five months. Good move.

PRICE SPIKES IN 2021
At a media briefing by the Independent Electricity Market Operator of the Philippines (IEMOP) on Dec. 21, they reported that the load weighted average price (LWAP) for the December billing has increased to P6.32/kWh due to thin supply caused by forced and planned outages of major plants.

The increase in prices in 2019 were understandable due to high demand before the pandemic while some big plants were in forced outages. The drastic decline in 2020 was due to the strict and prolonged pandemic lockdown and business closures. Prices jumped again to P5-8/kwh from May to October 2021 except in September, leading to prices this year approaching those in 2019 (see Table 2). 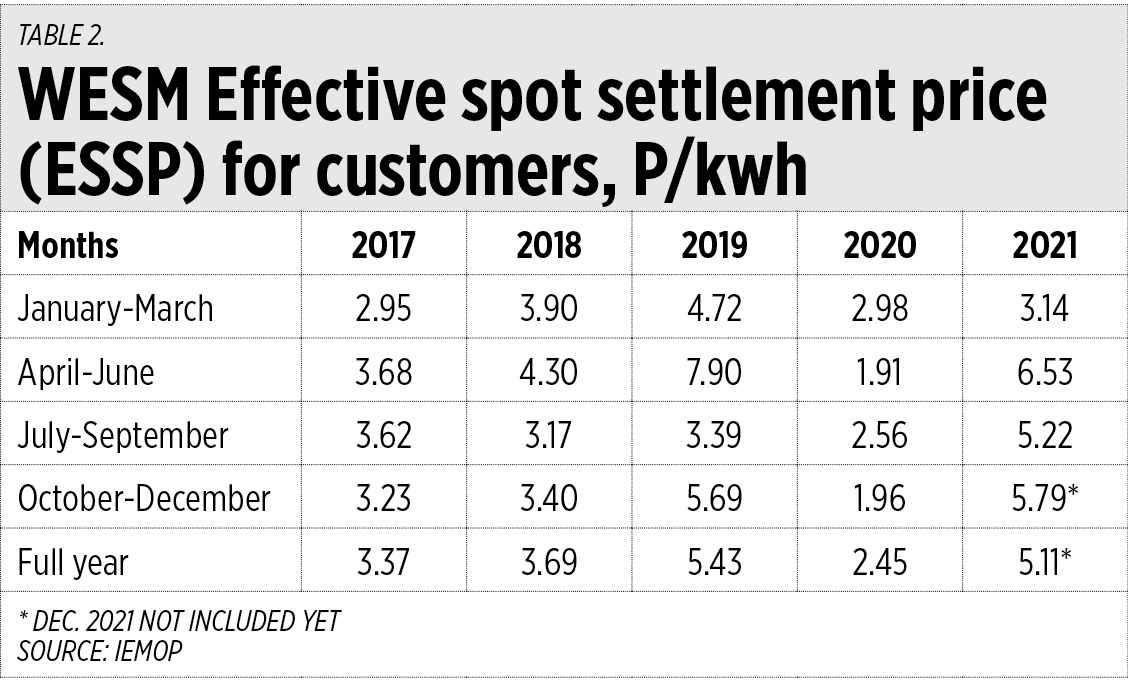 A number of big conventional plants like coal, natural gas, big hydro and geothermal are old and ageing, which occasionally leads to unscheduled or extended closure for repairs and maintenance. We need new big plants of similar technology, plus small modular reactors (SMRs) — nukes — to provide baseload and mid-merit power and avoid blackouts, or even brownouts.

Energy development should be guided by market demand and supply, not politics and the environmental lobby. A heavily politicized power policy leads to more politics than a stable power supply. We should avoid the European pathway and follow that which many of our big Asian neighbors have taken.

No disruption seen to SpaceX investment after administration steps down, DTI says

Meralco Bolts get their chance to do it right in Game Four, a win...