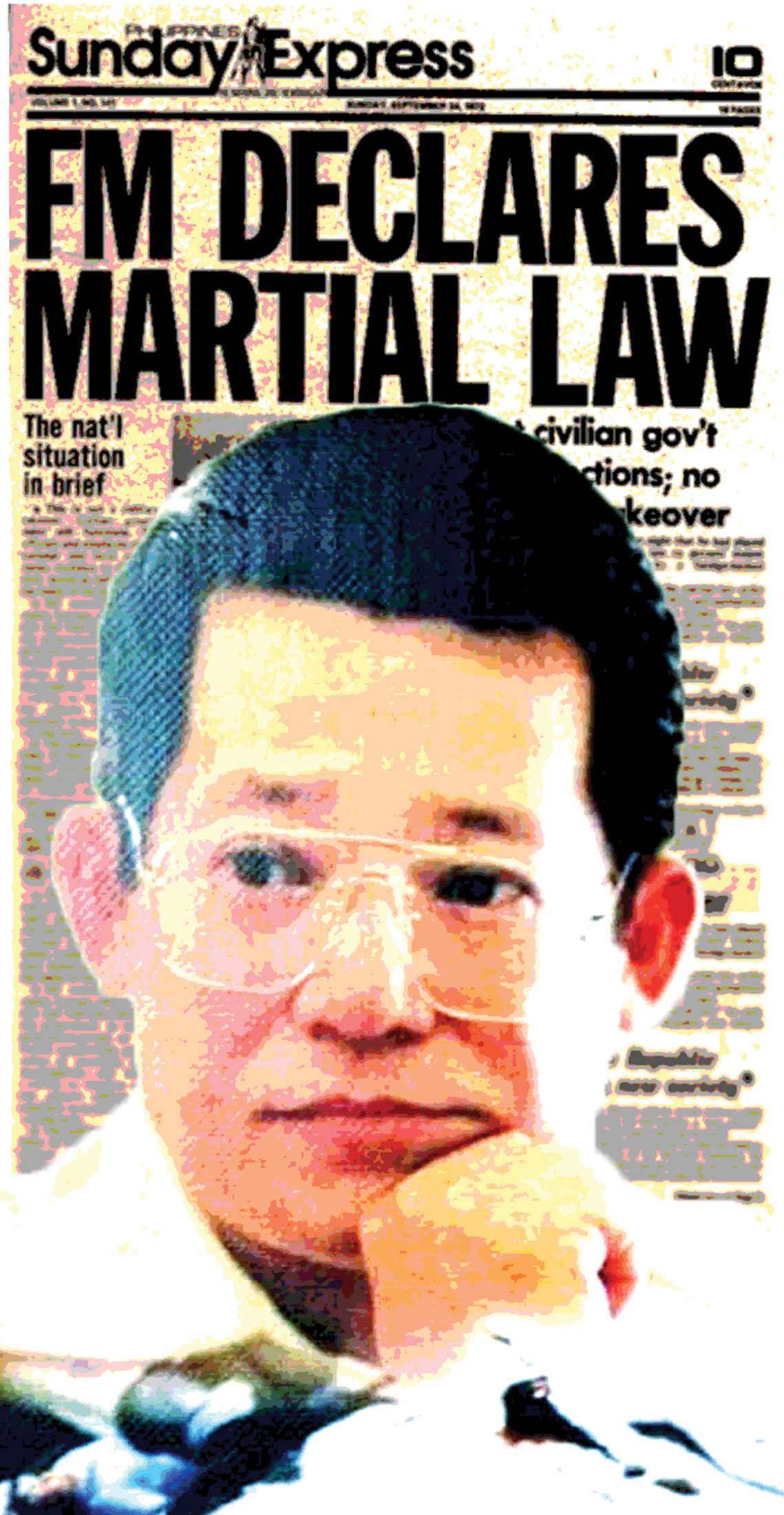 Almost 50 years after Ferdinand Marcos declared Martial Law, those of us who were around at that time continue to denounce it as part of a grand design to extend the Marcos rule indefinitely.

The official reason behind Marcos’s Proclamation 1081 was “to save the Republic and form a New Society.”

Marcos, who was known to have a fetish for numbers with the digit seven or numbers divisible by seven, officially declared Martial Law on Thursday, Sept. 21, 1972. The Proclamation was, however, carried out late Friday evening, Sept. 22, with most of Marcos’s political opponents in military custody hauled off to Camp Crame by Marcos military acolytes like then Colonel Romeo Gatan of the Philippine Constabulary (PC), the forerunner of the Philippine National Police.

Gatan led a team of PC operatives who carried out the arrest of Benigno Aquino, Jr., then a sitting senator performing an official function of a congress still in session, at the then Hilton Hotel at Isaac Peral (later renamed UN or United Nations Avenue) late Friday, Sept. 22 or early Saturday morning, Sept. 23, 1972. Gatan, later promoted to General, would prove to be a player in any major move against the Aquinos. But that is another story.

All these dates and hours assume some significance as I narrate the last few hours I spent with Ninoy Aquino before his arrest.

I had earlier interviewed Ninoy in June-July 1971 for a Marketing paper on “Image Management in a Senatorial Campaign” that I was writing as a student at De La Salle. I later expanded it into a Management Research Report (MRR) at the Asian Institute of Management (AIM).

A few days before Aug. 21, 1971, Ninoy told me he was running for President of the Philippines in 1973 and he wanted me to join his campaign. He however said that in order for me to learn the ropes of a national campaign, I should join the senatorial runs of the “young candidates like Monching Mitra and John ‘Sonny’ Osmena.” The miting de avance of the Liberal Party (LP) was on Aug. 21, 1972 and was to be held at the Plaza Miranda, the common man’s plaza for free speech and public gatherings.

The LP had lost the 1969 presidential and local elections to the Nacionalista Party (NP) headed by Ferdinand Marcos. Marcos was the first incumbent president to be reelected for another four-year term.

Ninoy, himself a former NP, had become LP Secretary General and had captured second place in the 1967 senatorial elections dominated by the NP. Together with the other LP leaders like Gerry Roxas, Jovito Salonga, Soc Rodrigo, Mitra, and Osmeña, Ninoy formed a fighting team called KIMMPOSS (Eva Estrada-Kalaw, Eddie Ilarde, Mitra, Gene Magsaysay, Salipada Pendatun, Osmena, Salonga, and Melanio Singson) to do battle with an equally powerful but more financially endowed NP ticket.

Because of a conflict in schedule, I was not able to attend the rally. I was with a lady, Margie Penson, whom I married a year later. Margie and I were on our way to her home that evening as we passed in front of the vacant lot which is now SM Megamall. I was monitoring the rally on radio and after a few minutes, we heard several loud explosions. We could hear people screaming and could imagine the terror-stricken faces of people in the chaos that ensued.

Shortly after the Plaza Miranda bombing, Marcos activated the first in several steps leading to the declaration of martial law. He suspended the writ of habeas corpus thus removing the protection of a citizen from arbitrary arrest and prolonged detention. He had succeeded in heating up the climate of fear and was unmistakably and irreversibly headed toward uncharted territory. Political observers and commentators speculated about the very real possibility of Martial Law given Marcos’ options and his consistent pattern of strong-arm politics.

Despite or perhaps, because of this explosive political environment, I soldiered on with my political marketing study on Ninoy. Part of the study involved inviting him to a convocation at the AIM. The invitation was for Friday, Sept. 22 at 3 p.m.

Ninoy arrived at AIM around 2:30 p.m. and spent some time at the faculty lounge with some AIM professors. I had spent around 40 to 50 hours interviewing Ninoy by the time he accepted my invitation to speak before AIM students, faculty, and other invited guests. In all those hours, Ninoy was always ebullient and confident of himself. This time, it was different. I noticed it the moment he stepped out of his black Toyota sedan accompanied by his most trusted close-in security, Ross Cawigan. The dispirited and weary demeanor.

While inside the lounge, I heard Ninoy for the first time speak of the dim prospects in the battle against the anti-democratic moves of Marcos and what definitely were orchestrated bombings of public facilities. Ninoy exclaimed, “Marcos is following a script. It seems there is a check list of events that need to happen to justify the declaration of Martial Law. There is now no legitimate organized opposition to Marcos. Even the Church, which is supposed to oppose these dictatorial moves on moral grounds is silent. The only opposition, illegal at that, is the New People’s Army and the National Democratic Front.”

Ninoy went on to speak before a crowd which had by then packed itself into the auditorium. Ninoy spoke for about 30 minutes and entertained questions for about an hour. In front of the graduate school of business students, Ninoy spoke of government deals favoring Marcos’ partisans and friends. As I later told Ninoy a few hours after his speech, the crowd was mesmerized by his revelations on the business deals, the bombings, and the attempts of Marcos to influence the ongoing 1971 Constitutional convention to adopt the parliamentary system of government to allow him or his wife to become Prime Minister thus skirting the term limitation in the 1935 constitution.

A key figure in that attempt was former Ambassador Eduardo Quintero, ironically from Leyte, Imelda’s home province. During a press briefing, Quintero brandished envelopes of peso bills given to him to vote for the parliamentary system. Marcos had Plan A: for the Philippines to adopt the parliamentary form of government. A subsidiary plan was for Imelda to run for President. The most preferred and realistic plan, no matter the permanent damage it would inflict on political institutions, was to declare Martial Law.

After Ninoy’s speech, he left for Channel 5 in Pasong Tamo, Makati. I was to proceed to Channel 5 and meet him there, as previously agreed, to continue our conversations and the tutorial on Political Marketing and Campaigning. He was to tape his TV program, Insights, which aired on Sundays.

Ninoy’s plans changed however. He sent word to me that he had to leave for the Hilton Hotel to meet with a bi-partisan group of senators and congressmen to discuss ways to raise new revenues “because Marcos emptied the National Treasury.” He suggested to meet the next day, Saturday, Sept. 23, at 10 a.m. at Channel 5.

The meeting did not materialize. He and thousands of others had been arrested that night. I had to change my dissertation topic on the advice of AIM faculty and military friends. My other resource persons had also been incarcerated: Bren Guiao, Ben Aniceto of ABS-CBN, Max Soliven, Senator Jose Diokno, Jose Mari Velez, Nap Rama, Genie Lopez and Ross Cawigan, among many others. Cawigan had been tortured to provide information on Ninoy.

In November 1973, Marcos continued his in-your-face treatment of the Filipino people: he declared Sept. 21 as National Thanksgiving Day.

I spoke to Ninoy several times when he was allowed to go on home furlough while in the custody of his military and civilian jailors. In one conversation, he spoke of the first time he met Marcos since his incarceration. He was brought to Malacañang one evening and the two political giants, fraternity brothers in Upsilon, called each other “brod” as if there was no ongoing conflict between them. Marcos said, “I envy you brod. You’re able to commune with history’s greatest intellectuals. I understand you read about three books a day. I can’t get that kind of thinking here. I’m surrounded by clowns.” Two Marcos cabinet members who were with the two political protagonists, squirmed in their seats. During the same encounter, Marcos said, “Ninoy, why don’t you just admit the charges against you. I’ll pardon you and you and Cory can live in the US. Your own close-in bodyguard admitted to so many of your misdeeds.” Ninoy replied, “Brod, of course he’ll admit to anything while being tortured. Don’t you think these two Ministers of yours will do the same thing if they were being tortured?”

It was clear Ninoy was still the same witty person he was before all the physical and mental humiliation he and his family had undergone, especially at Laur, Nueva Ecija.

Although one of those cabinet ministers would later say, in a characteristic moment of envy and pique, that Ninoy’s assassin “did the nation a favor,” Ninoy still remains a hero in the eyes of many.

Philip Ella Juico’s areas of interest include the protection and promotion of democracy, free markets, sustainable development, social responsibility and sports as a tool for social development. He obtained his doctorate in business at De La Salle University. Dr. Juico served as Secretary of Agrarian Reform during the Corazon C. Aquino administration.