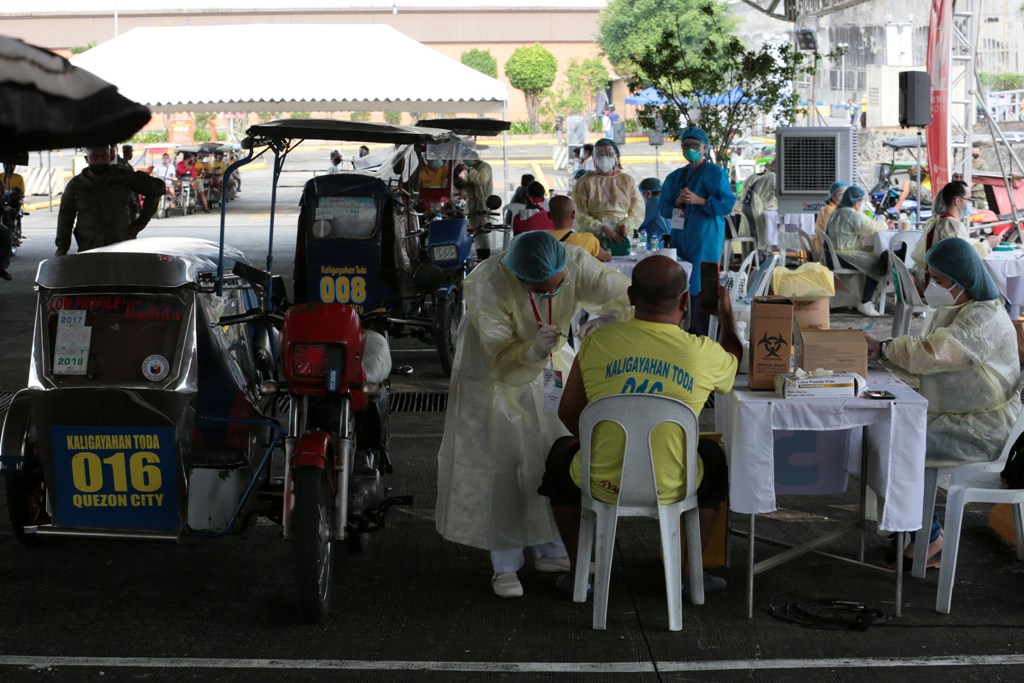 The number of men and women who brave sun, wind, rain, and flood to get in line for hours indicates that over a year since the pandemic began plaguing these isles, and quite contrary to President Rodrigo Duterte’s fact-challenged claims, more and more Filipinos are convinced of the need to be vaccinated against COVID-19.

Either that, or, rather than contracting the disease, some fear most their being denied financial aid or ayuda, or prevented from buying medicine and other needs during the lockdowns in the National Capital Region (NCR) and other areas. Many also fear arrest for being unvaccinated, as Mr. Duterte has threatened in at least three instances.

The regime has since denied that only the vaccinated will receive the P1,000 to P4,000 in aid promised those who will lose their jobs and who will otherwise be adversely affected during the Enhanced Community Quarantine (ECQ, the strictest quarantine level) period in the capital and elsewhere. Palace spokespersons have also issued the usual “clarifications” on Mr. Duterte’s repeated threats against the unvaccinated, who number in the tens of millions through no fault of their own, but because, due to the chaos in the government procurement system, there are not enough vaccines to go around.

Despite government efforts at correcting its own officials’ blunders, the reality is that once in the public sphere, false information — the contradictory phrase “fake news” is the common term for it — has a tendency to linger in the minds of those who had earlier been deceived by it. Despite evidence to the contrary, for example, there are still people who think that Ferdinand Marcos was a war hero on no other basis than his own claim that he amassed more medals for valor during World War II than anyone else on the planet.

During the worst crisis in information in this country in decades, when the uncritical mass of the population will believe almost anything, those fears seem embedded enough in the public mind to explain the overcrowding and confusion in many inoculation sites. People who have been in line for hours have, after all, been told that vaccine supplies have run out, while those desperate for aid have been besieged by speculations that Mr. Duterte could deny other LGUs ayuda funds from the National Government in the same way that he has threatened to do the same to “a certain NCR mayor.”

As seemingly dominant as the pro-vaccination frame of mind has become, however, there are nevertheless still divergent, contrary views among the population, such as those of:

1.) individuals opposed to all vaccines whether anti-measles, polio, or dengue, whose refusal to have their children immunized led to the reemergence of polio in the Philippines and to a measles outbreak in 2019;

2.) others who are against being inoculated with non-Western-sourced vaccines such as China’s Sinovac, and who prefer either the Pfizer vaccine, Moderna, Janssen, or AstraZeneca and are willing to wait for them to be available; and,

3.) still others who question the processes through which the anti-COVID vaccines have been tested, vetted, and allowed for widespread use, and who argue that their possible risks to human health and life outweigh their claimed benefits.

Those in the first category remember the 2016-2017 Dengvaxia controversy, when, mostly due to the irresponsible reporting of some media organizations, many families thought that vaccine to be so dangerous to children as to be responsible for some of those inoculated’s catching dengue and dying from it despite the scarcity of evidence linking one to the other. Their fear of that one vaccine has morphed into fear of all vaccines.

Those in the second category are only being consistent. They have long been conditioned by the schools, the media, and the rest of the dominant US-influenced culture to regard the West as the source of all that is superior. It is a preference strengthened by the negative publicity on their supposedly limited efficacy and safety that Sinovac and other China-sourced vaccines have been getting compared to the favorable media reports on their Western-sourced counterparts.

Among those in the third group are some medical professionals. The latest to express their reservations about the currently available vaccines are a medical doctor who retired as a professor at the University of the Philippines (UP) College of Medicine, and a pharmacologist in that College’s Department of Pharmacology. In addition to their credentials, neither has anything to gain — both have on the contrary much to lose — in taking issue with the vaccination-as-cure-all view.

Interviewed over radio, the former argued that rather than through the vaccines that are currently available, the safety and efficacy of which he challenged, the Filipino millions can better protect themselves by observing health protocols, strengthening their immune systems, eating right, and following a healthy lifestyle. Pilloried by some of his former UP colleagues, he was supported by, among others, a pharmacologist who noted alleged lapses in the testing of the vaccines that are currently in use.

Despite the obvious differences among these three groups — only those in the first category qualify — all have been labeled “anti-vaccine,” and were even made to appear like irresponsible crackpots, with some supposedly free expression defenders condemning the radio station that interviewed the doctor in the third category for providing him a platform from which to express himself.

Those against all vaccines have little to offer by way of useful information. But the dissenters in the second and third categories can quite possibly contribute to the populace’s making informed decisions. Biased or not, the views of those who prefer Western-sourced vaccines nevertheless need to be heard, examined, and researched on for their validity, and so are those of the third group. Whether right or wrong, those views and the basis for them in research findings and actual case files can provide the additional information the people need in deciding whether, how, and with what they should be vaccinated.

The point is that whatever they decide to do or not do in facing the life and death challenges of surviving the pandemic, the Filipino people should arrive at it armed with as much information as possible rather than less.

It is perfectly right to scorn the rubbish that the liars online and off and in print and broadcast media spew daily to mislead the gullible. But to summarily dismiss views contrary to one’s own from those who care for the well-being of the public — and who have the credentials to prove it — is to replicate the arrogance rampant in much of this country’s benighted officialdom. It is contrary to the open-mindedness that arriving at intelligent decisions on complex issues demands.

But if all this seems so abstract and academic, it is because, with only 12 million fully vaccinated out of the 70 million needed to achieve herd immunity, and with the vaccine roll-out so slow, there are not even enough vaccines available. For the anxious millions awaiting their turn at the country’s inoculation sites, that is the most vexing fact of all.

Artefino bazaar is a celebration of the local