On May 18, the International Energy Agency (IEA) released its very controversial and sensational report, “Net Zero by 2050: A Roadmap for the Global Energy Sector” (224 pages). It is sensational because it proposes the following impractical policies, summarized in a chart in page 20:

By 2021, no new coal plants, no new oil and gas fields for development.

By 2025, no new sales of fossil fuel boilers (for power plants).

By 2030, phase-out of all coal power plants in advanced economies.

By 2050, solar and wind must constitute almost 70% of electricity generation globally.

These are very impractical policies that are highly detached from the current energy and economic realities of many countries.

Again, I briefly survey some countries and, in the table below, I divided them into three groups: Group A, Europe with double-digits share of solar and wind to total power generation in 2019; Group B, North America plus Australia); and Group C, Asia.

May I also correct some mistakes in GDP figures of some Asian countries in Table 2 of this column’s paper on May 17,  https://www.bworldonline.com/gdp-contraction-government-overspending-and-non-green-recovery/. The correct numbers are here in Table 1. 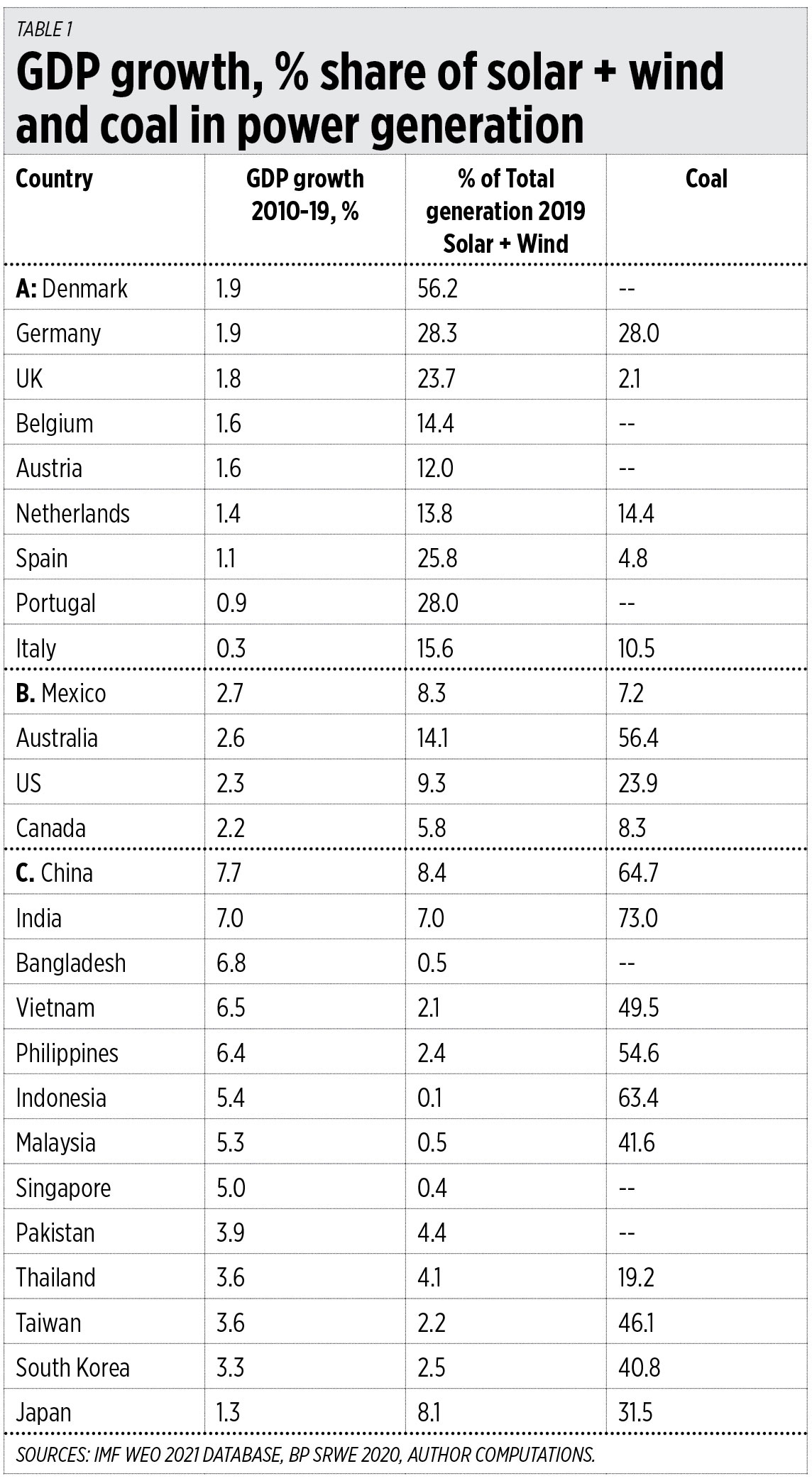 Group A countries have low average GDP growth of only 0.3% to 1.9% as they have double digits share of solar and wind, and have none or small coal share to total power generation.

Group B countries have modest growth of 2.2% to 2.7% as they have single digit share of solar and wind except Australia.

Group C countries have fast growth except Japan, they have low share of solar and wind, have high share of coal to total electricity production.

These do not prove outright causation as there are many factors for a country’s economic performance. Nonetheless it shows a trend and the IEA, the UN, the many climate activist NGOs and business interests are wrong to impose the phase-out of coal for many developing countries and coerce them to embrace unstable and intermittent solar and wind.

Last week the Independent Electricity Market Operator of the Philippines (IEMOP) held its second quarterly Market Participants Update (MPU) and media briefing afterwards. Among the prominent developments was the significant price spike at the Wholesale Electricity Spot Market (WESM) for May because of higher power demand and low supply, low margins due to many old power plants on scheduled and unscheduled or prolonged maintenance shutdowns.

The load-weighted average price (LWAP) in May (up to May 25) is double the April level and triple the May 2020 level. In the generation mix, coal produced 54% of total while solar, wind, and biomass combined produced only about 4.7% of the total. Oil-based plants contributed about 1% of total (not shown in Table 2).

Intervals with secondary price cap — none in March and April this year but in May there were 57 intervals. This is a prelude to blackouts actually. When prices spike too often, that means supply is not sufficient to meet demand and the government solution is price control at a low rate of P6+ per kwh, with proposals to further bring it down to only P4+ per kwh.

Price control is wrong. Investors who can remedy the seasonal and yearly supply gap during hot months of April to June will not put up the necessary peaking plants. Instead of rewarding them for providing additional supply during those hot months and days, they will be penalized via price control.

The Energy Regulatory Commission (ERC) should either abolish the secondary price cap or price control at low rates, or raise it to twice or thrice its current level. Cheap but non-available power (blackouts) is worse than occasional expensive but available power (no blackouts).

International pressures to coerce the Philippines and many countries to phase out coal and other fossil fuels, embrace unreliable, intermittent, weather-dependent, expensive battery-needing solar and wind power is wrong and anti-poor. It is a formula for low or zero growth as shown in Table 1 above. Blackouts or relying on candles and gensets running on diesel is perfect formula to discourage investments and more job creation.