In a speech before new appointees in Malacañang on Feb. 6, President Rodrigo Duterte blasted again the two Metro Manila water concessionaires. He said, “Where is the money of the average Filipino who are poor who pays his water bill and he has to pay because if (not) it will be cut off? Where is the money of that son of a b****? Give us back the money. Give it back to the people and maybe we can talk about solving your problem.”

Last December, this column has actually provided some answers to those question (see https://www.bworldonline.com/thank-you-maynilad-manila-water/ Dec. 23, 2019). The table there is expanded here, and the quick answers to “where did the money go” are: the money went to improve service delivery to some 8.5 million additional consumers of both concessionaires, it added 1.66 million new water connections, it expanded 24 hours water service by 70%, and it reduced water leaks and theft by 43% (see Table 1).

Thank you, Maynilad and Manila Water. The public already got the services for the money they paid for. It cannot be “given back” to them or the government via the Metropolitan Waterworks and Sewerage System (MWSS).

In previous attacks by the President, he said that the contracts with the two concessionaires are “onerous” and not beneficial to the public and government. Let us check the numbers again.

One cubic meter (cu.m.) is 1,000 liters. One drum of water is 208 liters so one cu.m. is nearly five drums. Currently, lifeline customers or those consuming 10 cu.m. or less per month pay only P6.13/cu.m. and P9.63/cu.m. basic charges in Manila Water and Maynilad areas respectively. That is very cheap, thank you concessionaires. 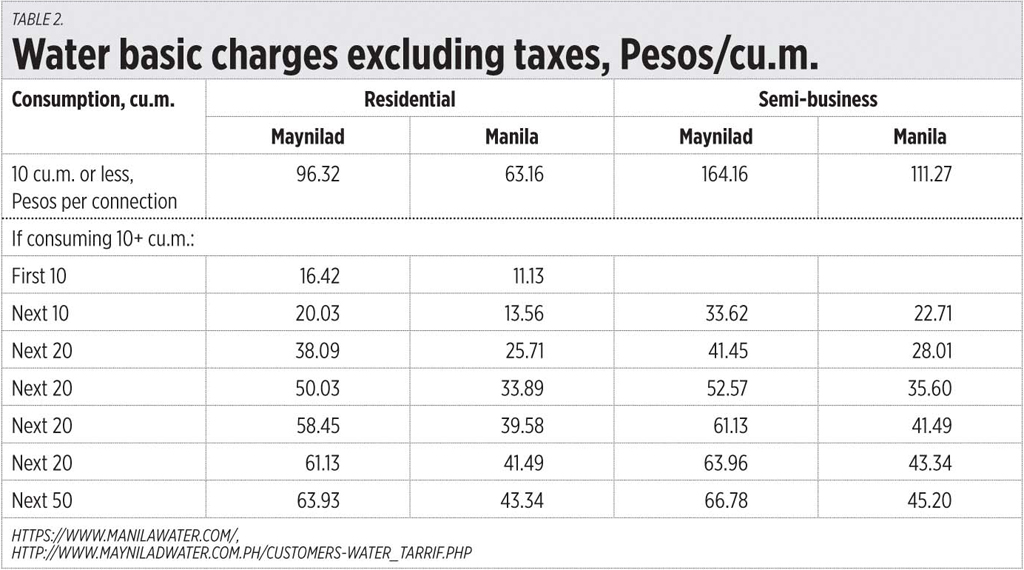 The 11 cu.m. is equivalent to 54 drums of water in a month — that’s a lot and residents will pay only P121 and P170 in basic charges in Manila and Maynilad Water, respectively. That is not “onerous” or “abusive.”

Now, the continuing political harassment of these two water companies has affected them, banks have limited if not stopped lending to them, they will not have enough funds to develop even short-term solutions to the rising water demand.

Data from the Food and Agriculture Organization (FAO) showed that in 2017, the Philippines has natural water production of some 479 billion cubic meters (bcm), higher than those in Vietnam, Thailand, Japan, and South Korea and yet we do not hear of these countries experiencing “water crisis.” Our internal water production of 4,565 cu.m. per person per year is also higher than these four neighbors (see Table 3).

So natural water is there, lots of rain water during the wet months resulting in frequent flash flooding that kill many people and destroy properties. MWSS has failed to build dams to “harvest” and store this huge surplus water which just go straight to the sea. So the two concessionaires have to develop short-term sources of water but their funding is limited.

The President and his supporters should be grateful, not vengeful, to these two water companies. The concession agreement until 2022 should proceed without further harassment, and if possible, the concession extension until 2037 should be honored, not discontinued.