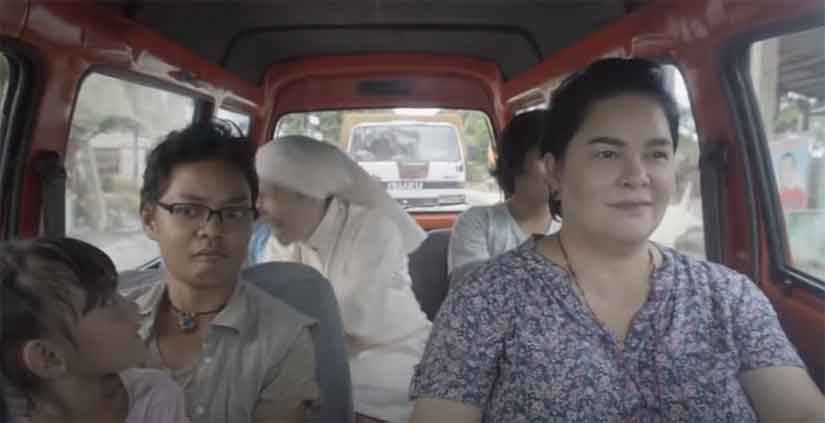 Tolstoy started Anna Karenina with the statement: “Happy families are all alike; every unhappy family is unhappy in its own way.” I’ll take that as permission to like Victor Villanueva’s darkish family comedy Patay na si Hesus (Jesus is Dead), about a family taking the four or so hours trip down the coast of Cebu, from the island province’s capital and across the strait to Dumaguete City in Negros Occidental to attend the wake of their estranged father, the eponymous Hesus. The setup is obviously Little Miss Sunshine — dysfunctional family piles into a van to take a cross-country trip — but the flavors and ingredients and resulting dish are so distinctly Filipino I’d call this a valid variation on the original.

Where Sunshine’s Uncle Frank sparingly doles out details of his homosexuality, Chai Fonacier’s Jude is militantly upfront, insisting folks call him by his proper name (as opposed to “Mary Jude”) and acting as the patriarch of his own family, down to the fit of jealousy he throws when he learns what his girlfriend Mary (Sheen Gener, who played Insiang in Tanghalang Pilipino’s stage adaptation) has been up to in his absence. Where Sunshine’s Grandpa Edwin spews profanities and talks of his heroin habit, Mailes Kanapi’s Sister Linda stands radiant in her pure white habit and unspoken wide-eyed insanity (between Alan Arkin’s sullen Edwin and Kanapi’s smiling sister I think I’d feel more comfortable — and far safer — with Edwin).

But that’s the crazy stuff; what cements the bits of madness, gives it structure and emotional weight is the parent figure trying to keep it all together. Toni Collette and Greg Kinnear do a fine job as Sunshine’s beleaguered parents, but Jaclyn Jose manages the same task just fine all by herself, though not without cost; as the film opens and a customer orders pork chop at her food stall, Jose’s character takes a large breaded slab of meat out of a serving tray and with meat cleaver in one distracted hand proceeds to mince the chop into ground pork. “Are you all right?” co-worker Domeng (Publio Briones) asks. “Jesus is dead,” she declares matter of factly.

Jose who was known early in her career for her erotic work (Private Show; Takaw Tukso [Passion Play]), later becoming better known for her award-winning dramas (Ma Rosa), here takes a welcome comic turn as Iyay, the family matriarch. Her approach doesn’t seem to differ much in either comedy or drama, and I for one am grateful: she plays the scene simply, going for truth rather than the easy laugh, and the humor emerges with little unnecessary effort. When she breaks the news of their father and the impending funeral trip, baby brother Jay (Melde Montanez) rebels: he can’t go, he has things to do. Iyay’s response is epic mother material: “Tomorrow is your father’s funeral. You can still cancel your plan. The funeral can’t be put on hold. There’s no repeat performance. We can’t dig up the corpse and bury it again just because you had prior plans.” That Jose delivers her showcase speech in the accent and cadences of musical Visayan only makes the moment funnier.

The script by Fatrick Tabada (not familiar with the writer but he’s apparently fond of names as an occasion for burlesque wordplay) and Moira Lang (who — fun fact — worked on this right after she helped Lav Diaz on his ultra solemn script for Norte, the End of History) simmers along nicely; like Jose’s Iyay, it’s the no-nonsense concrete holding the whole thing together. The direction by Victor Villanueva isn’t especially distinctive but it’s clean and clear, which is what a comedy basically needs. Villanueva, I suspect, is hampered by the fact that road trips in the Philippines aren’t necessarily cinematic. Oh the scenery is beautiful (and there’s one overhead shot of the van going up the curves of a drive — the emerald green of Cebu Island to the right, the luminous waters of the Cebu Straits to the left — that’s breathtaking) but as vehicles on long roadways go the film doesn’t contribute anything particular to the genre — the film is really there for the characters and their oddball interactions with each other.

Patay takes a few potshots at the Catholic faith — the death of the family patriarch, the family dog named Judas, Kanapi’s demented nun — but the digs feel more affectionate than angry. Actually the whole film is surprisingly lighthearted despite the morbid premise, or at least wears its grimmer aspects lightly on its sleeve. Not great, but one of the more enjoyable Filipino films of the 2010s. Available on Vimeo on demand.