Those of us of certain seniority can remember when we would walk into conference rooms in East Asia and be treated as sages with something to say. Our boys were setting up their capital markets and training their accountants. Their young were honing up in our colleges and laboratories. Half a century later, the tables have completely turned. Now our boys incessantly face the question: If you know so much how come your economy is at rock-bottom? How come your teachers are our house help? It is a good bet that the World Bank Philippine Economic Update held via Zoom on Dec. 9 will focus on regaining the ground lost to the pandemic but hardly to the pre-pandemic secular investment decline. The latter loss is bigger but being a slow-burn is no match for the fast-burn of the pandemic.

Investment of the old normal Philippines committed two major sins: (i) the Philippine investment rate has perennially fallen too short from that of its Asian rivals, which is well-known. Table 1 (data.worlbank.org) reinforces that awareness for the Philippines. 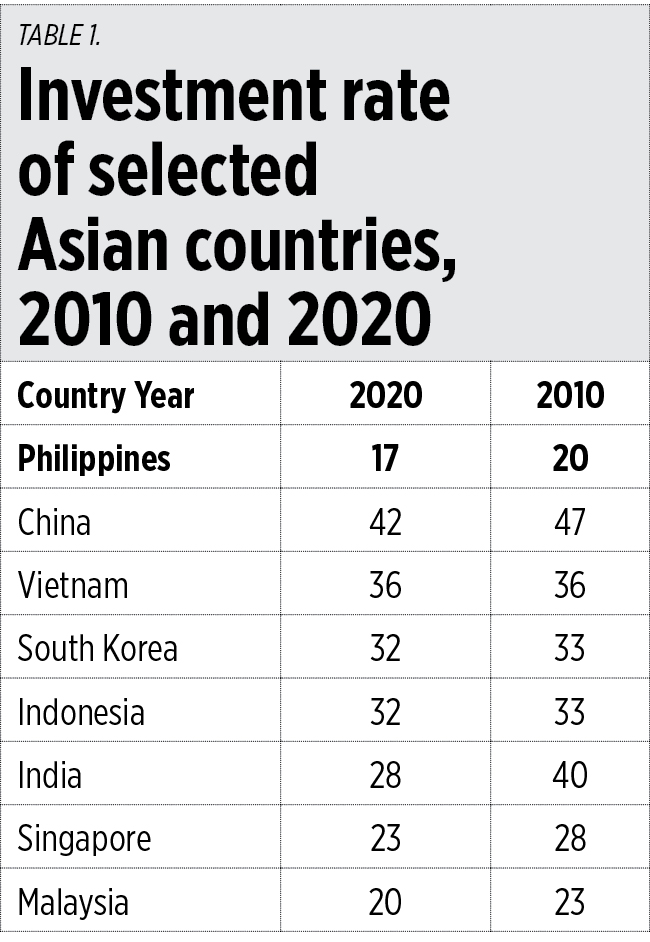 As of 2021 Q2, it stands at about 23%. The dismal government capital outlay (GCO), averaging at between 2-3% of gross domestic product (GDP) historically when the GCO among our neighbors averaged at 5-8% of GDP, leads this sad picture. No surprise that our infrastructure is 20 years behind our neighbors’.

Since investment represents how we value our future, we have conceded defeat at the starting block. As a nation, either we have the least regard for the welfare of our progeny (a genetic factor), or the rules of the investment game in the Philippines so favor consuming rather than sowing the seeds of future harvest (an epigenetic factor). Jose Rizal in La Indolencia de los Filipinos struggled with these issues: the indios, he argued, were not genetically lazy as detractors claimed; but the effort-reward nexus imposed on Filipinos was so stacked up against effort that laziness is a strategic not a genetic response. He argued further: if placed in a friendlier effort-reward environment, perhaps of our own making, the Filipino will morph from a guitar-lugging carefree grasshopper into a tireless worker ant of Aesop’s fable. Do we have it in us to prove Rizal right?

The rules of the investment game today are now of our own making after 75 years of independence. Would it not be more plausible that we as a nation forbore these bad rules because they suit our temperament better than other more future-friendly rules and thus is rooted in our genes? Is it perhaps the case that we are happy with where we are at the bottom of the barrel? The global happiness index says that we are not a particularly unhappy nation, ranking 61 among 149 countries in 2020. And now we seem to be disgustingly close to embracing the oldest of the old normal in the May 22 elections. Jose Rizal seems teetering on falsification!

The second sin is that Philippine investment has concentrated on the Non-tradables sector or its catchall “Services” (retail/wholesale trade, real estate, property, banking, etc.) to the relative neglect of Tradables (Manufacturing and Agriculture). The Dec. 4 issue of the Philippine Daily Inquirer (PDI) is three-fourths “Property.” Tradables are those goods that travel in search of markets like exports; Non-tradables are those produced and consumed in the same location like property. This is revealed in Table 2 in the value added as percentage of GDP of Manufacturing and Services in 2020 for selected Asian countries (data.worldbank.org): 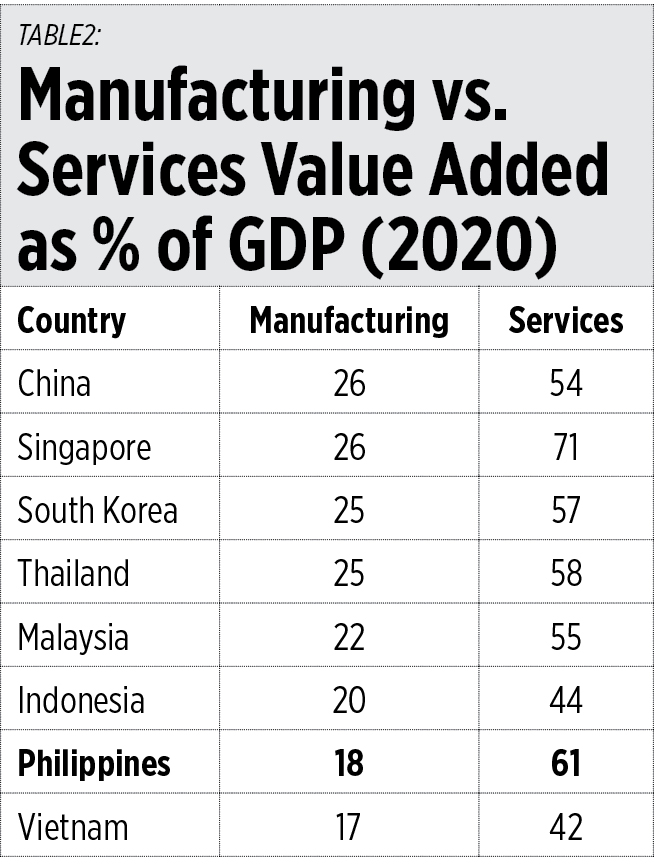 Many wonder why our export performance is at rock-bottom in the Asian region (see e.g., Habito: “Pathetic Laggard,” 9/14/2021, PDI) and why we import virtually everything now. Well, if you mount Tradables (Manufacturing and Agriculture) on a torture rack, exports will lag and imports swell because exports and imports are quintessentially Tradables and Manufacturing.

It turns out these two sins (low investment rate and bias against Manufacturing) are related. Daway-Ducanes and Fabella (August 2021) show that the Investment Rate (GDCF as percentage of GDP) across countries associates 1.) positively and strongly with (i) Manufacturing share in GDP; (ii) DFIs; and (iii) currency depreciation interacted with strong overall governance; and, 2.) negatively and strongly with (i) Services share in GDP; and (ii) simple currency depreciation. A higher Manufacturing share in GDP will raise and/or be raised by a high investment rate.

How do we construct a pro-Tradable ecology? As observed, simple depreciations will not do. It must be seen as taken from a position of strength, as part of an overall pro-Tradables program and not when you have a looming balance of payments crisis. Refusing to allow an appreciation when trade surpluses are endemic is another mark of a pro-Tradable ecology — precisely what Vietnam did in 2020: no revaluation for the Dong while all Asian currencies were appreciating. Vietnam was threatened by the US with the label “currency manipulator”; so were economies now oozing with success: Japan, China, South Korea, Singapore, Norway, Switzerland, and Germany. Shouldn’t we be aspiring to join that exalted club in the new normal?

But the currency is only one handle in the pro-Tradable ecology. Take the cost of power. Including only generation, transmission and distribution cost in the electricity tariff for Manufacturing, as does Germany, is a signal start. Since other imposts constitute about 15% of the power bill, Manufacturing can see real reduction in the cost of power. Foreign investors who felt betrayed when their corporate income tax rose from 17% (the equivalent of the 5% GIT) to 25% by CREATE could alter perception. Clearing hurdles to embedded power units in PEZA zones and incentivizing rooftop-mounted solar PV by large establishments would reduce power cost further.

Well, the investment rate is so low because we have closed off important Tradable sectors to private capital. Agriculture, Mining, and Forestry are ring-fenced by irrational rules. Consolidating farmlands and leasing them long-term to agro-industrial complexes would be a great step. Start with passing the HB 9955 which calls for the raising of the ownership ceiling for households to 24 hectares and to 100-500 hectares for PSE-registered firms. This will bring back private capital to agriculture, increase productivity and resilience. But it will take a new normal May election outcome to bring these about.

Raul V. Fabella is a retired professor of the UP School of Economics, a member of the National Academy of Science and Technology and an honorary professor of the Asian Institute of Management. He gets his dopamine fix from bicycling and tending flowers with wife Teena.

Forecasting in a time of radical uncertainty

Our dysfunctional bureaucracy as a binding constraint