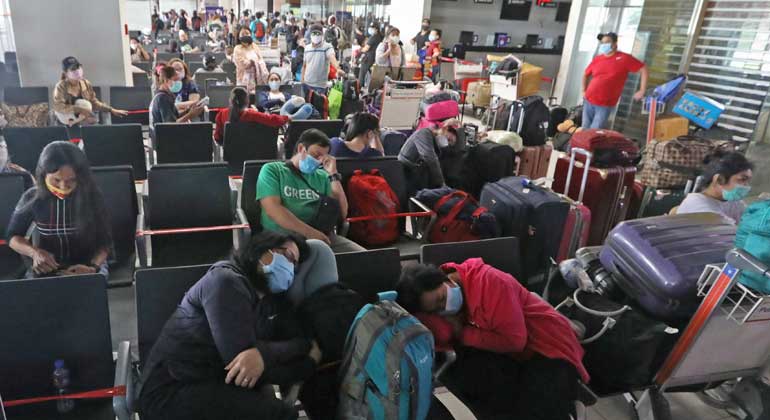 THE National Economic and Development Authority (NEDA) said Thursday that it is now “more open” to the creation of a new department for overseas Filipino workers (OFWs) following the job losses experienced by OFWs during the pandemic.

“I have not made any stand yet, but NEDA as an institution, under Secretary (Ernesto M.) Pernia had not supported that,” Acting Socioeconomic Planning Secretary Karl Kendrick T. Chua told senators.

“Given the developments… (and the) need to look after millions of OFWs, I am actually more open to it.”

The coronavirus pandemic has so far led to the repatriation of more than 174,000 OFWs since February.

The Department of Foreign Affairs has also monitored over 10,300 confirmed cases involving Filipinos abroad, including 2,900 still undergoing treatment, 6,500 patients who have recovered and 770 who died.

Senator Emmanuel Joel J. Villanueva, who chairs the labor committee, said he is ready to start hearing bills establishing the Department of OFWs, subject to input from NEDA and the labor department.

“I’m ready to hear the measure. I’ve been waiting for the position of the different
government agencies,” Mr. Villanueva said.

The measure is among the bills President Rodrigo R. Duterte asked the 18 th Congress to pass during his fifth State of the Nation Address. It has so far been approved on final reading in the House of Representatives.

Mr. Chua said NEDA will look into provisions that can be improved.

“One of the concerns was whether we need such a department that will last for a long time. As we know DAR (the Department of Agrarian Reform) continues to exist even after certain functions have already ceased,” he said.

“What I told them is look into a time period. Maybe we can evaluate every few years whether such a department or agency is needed.”

“What we actually proposed is instead of creating ecozones, departments or agencies, we look at it as a package,” he said.

“Number one, will a new department really address the problems we are facing? We proposed that all department creation be supported by a cost-benefit analysis.” — Charmaine A. Tadalan