THE economy of the National Capital Region (NCR), alongside those of Calabarzon and Central Luzon, suffered double-digit contraction that weighed heavily on the country’s output last year, the Philippine Statistics Authority (PSA) reported on Thursday.

Preliminary results from the PSA 2020 Regional Accounts showed NCR shrank by 10.1% last year from the 7% growth recorded in 2019.

Other regions that posted double-digit declines were Calabarzon at 10.5% and Central Luzon with the worst decline in all regions posted 13.9%. The previous annual gross regional domestic product (GRDP) of these regions were recorded at 4.6% growth and 5.9% expansion, respectively.

NCR plays a “crucial role” in the national economy as well as its interrelation to the other two more progressive regions, Central Luzon and Calabarzon, National Economic and Development Authority Assistant Secretary Greg L. Pineda said during the briefing.

“The interdependence of the three major regions and also the restrictions of the physical movement of people, which created the job losses and income losses… contributed to the decline in the performance of the NCR for 2020,” Mr. Pineda said.

Metro Manila remained the largest contributor to the country’s economic output at 31.9%, albeit lower from 32.1% share in 2019.

Other regions that posted contractions below the national average were Cordillera Administrative Region (-9.9%), Central Visayas (-9.9%), Cagayan Valley (-9.9%), and Western Visayas (-9.7%).

UnionBank of the Philippines, Inc. Chief Economist Ruben Carlo O. Asuncion said the double-digit decline was an effect of the capital region being the “ground-zero” of the COVID-19 spread in the country last year.

“The deeper-than-the-national-average [GRDP] decline of NCR at 10.1% is not a surprise. NCR experienced the initial strictest lockdown affecting all aspects of economic activity back in March 2020,” Mr. Asunscion said in an e-mail interview.

In terms of sectoral output, Western Visayas recorded the steepest drop in services at 14.3%, followed by Cagayan Valley’s -11.6% and Central Luzon’s -10.6%.

For industry, Central Luzon led the decline with 20%, followed by Central Visayas and Cagayan Valley at 18.3% and 16.9%, respectively.

Sought for his outlook this year, Mr. Asuncion said: “The GRDP for NCR may not be far behind the national average we are expecting at 4.0% to 4.5% growth at this point.” 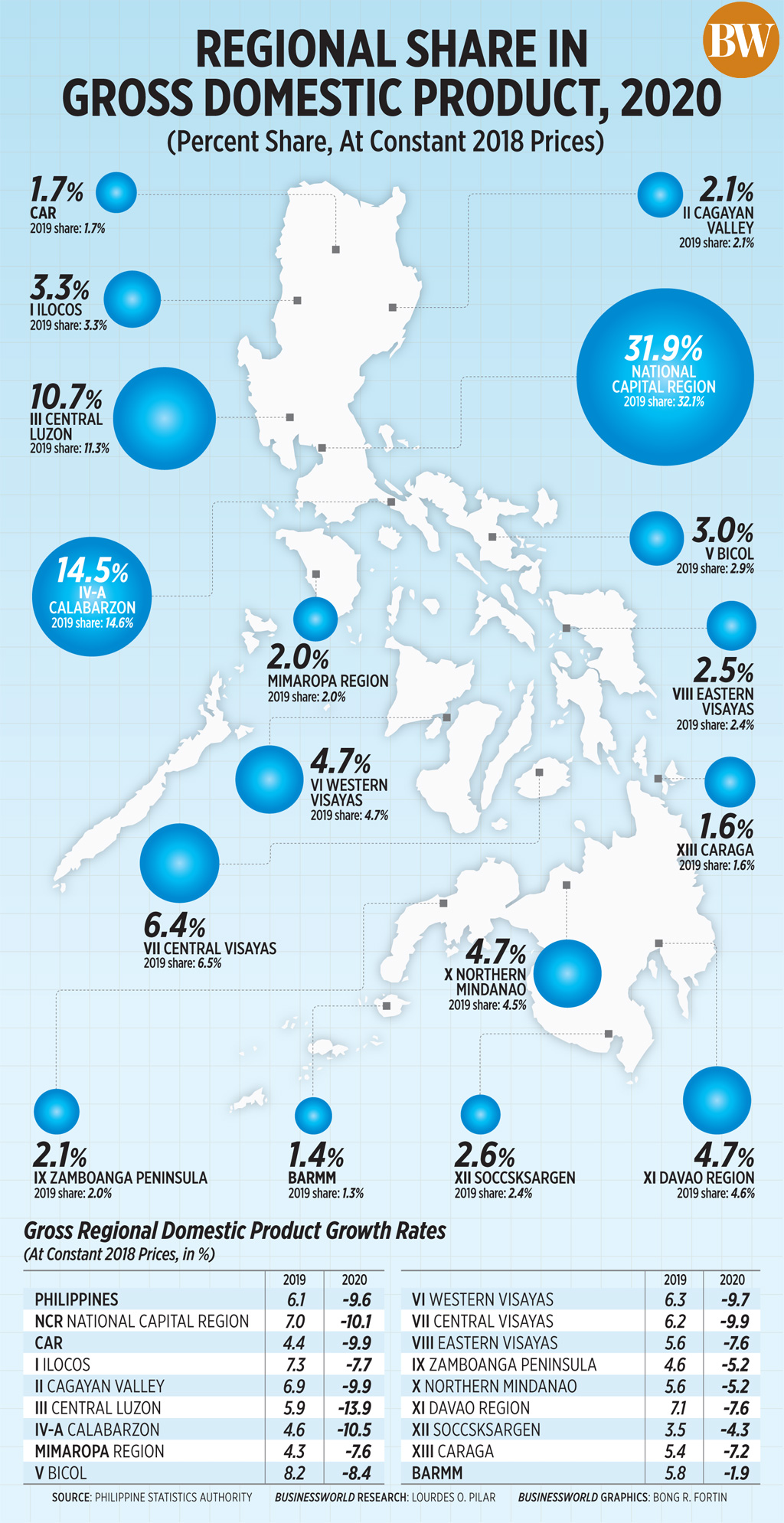 Hot money flees Philippines for second month in a row

Yields on gov’t debt inch up on GDP data