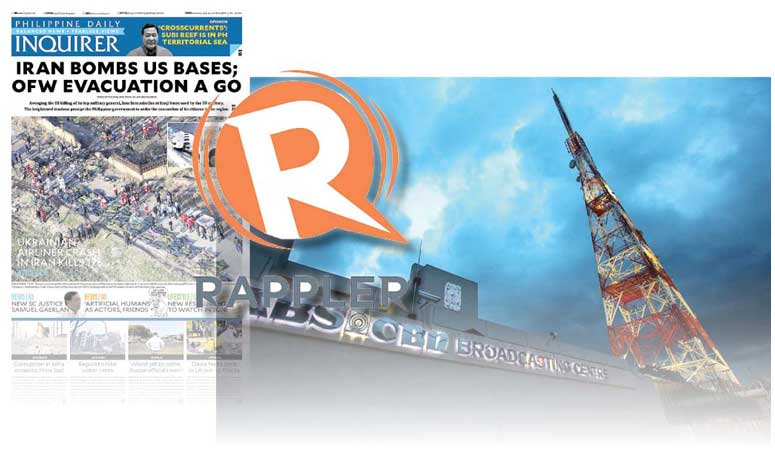 As if to remind the Philippine press and media of the challenges they face during his troubling watch, President Rodrigo Duterte began the new year by urging the owners of ABS-CBN to sell the network. He had earlier threatened to make sure that the House of Representatives majority he controls doesn’t renew its franchise, which expires on March 30 this year. One of his accomplices in that House of ill-repute has in so many words assured him that they will do exactly that.

Mr. Duterte has been as obsessed with ABS-CBN as he has been with the online news site Rappler and the Philippine Daily Inquirer newspaper. He has accused the TV and radio network of defrauding him for not airing his campaign ads in 2016. He has also described it as a partisan of the opposition, and alleged that it has been spreading false information.

ABS-CBN sources say they didn’t air his ads in 2016 because they were not submitted on time and therefore didn’t meet their programming deadline, and that they returned his money. He nevertheless wants the network “out,” in what had seemed to be part of his by now well-established anti-press freedom agenda of harassing any media organization with any semblance of independence and adherence to the professional and ethical standards of journalism. But his latest diatribe validates the suspicion that his intention is not to shut it down, but to turn it over from its present owners to another group that is acceptable to him.

Make that a group that is the closest and most loyal to him, his interests, and his de facto dictatorship. What he very likely has in mind is led by one of his Chinese cronies, who has been buying up and taking over companies as if he were made of money. His conglomerate has recently gone into the media and mass communication business in addition to power and water utilities. His acquisition of ABS-CBN could be the beginning of a regime plot to create, in tandem with the government media system, its own news monopoly. With his support and all the money in the world, there is little to prevent Mr. Duterte’s oligarchs from taking over any privately owned media organization and even the entire system. But it would only be part of the Marcos-era crony capitalism that the regime is reprising.

The by now likely possibility that ABS-CBN’s franchise will not be renewed and that it will either cease operations or fall into the grubby hands of Mr. Duterte’s China-backed cronies is a blow to press freedom that is paradoxically occurring in the context of two positive developments on the media front. These are, first, the conviction of the principals and their accomplices in the 2009 Ampatuan Massacre of 58 men and women including 32 journalists and media workers; and second, the launch of the UNESCO-supported Philippine Plan of Action on the Safety of Journalists (PPASJ) crafted by several media advocacy and journalists’ groups.

Both were glimmers of light in the dark pit of attacks, harassments, and threats against press freedom and free expression into which the country has fallen under the foul watch of the Duterte despotism.

The list is long and lengthening. Mr. Duterte, his online trolls, and the clueless bureaucrats of the government media system and its print and broadcast hacks have been threatening the Philippine Daily Inquirer at every opportunity. As the rest of the world but few Filipinos know or care about, the regime and its agents have filed a total of 11 complaints and court suits against Rappler, banned its Malacañang reporter from the Palace, and even denied its correspondents access to public events in which Mr. Duterte is present.

Under regime orders, a purveyor of manipulative information has been taking down the sites of several alternative media organizations through Distributed Denial of Service. The Duterte police and military are also red-baiting and further endangering the lives of journalists for being true to the fundamental journalistic principle of multi-sourcing as part of the imperative of getting at and reporting the truth. Journalists are still being killed for their work despite the Presidential Task Force on Media Safety (PTFoMS). The death toll during the past three years of the Duterte regime is currently at 14 — and counting.

The conviction on Dec. 19 of several members of the powerful Ampatuan clan and the police and military thugs under their pay did not end impunity overnight, and neither is it likely to stop the killing of journalists. It did not disband the private armies of the warlords in the regions, mostly in Mindanao, that over the last 20 years have proven to be the most dangerous places for journalists, human rights defenders, and social and political activists. Neither did it abolish the paramilitaries that have been involved in the harassment and murder of journalists, or stop the collusion between the police, the military, and local government officials in that brutal enterprise. But it has at least planted a seed of doubt in those who would silence journalists that they can always get away with murder, which an acquittal would have otherwise declared in the clearest and most incontrovertible terms.

On the other hand, by addressing the multiple factors that over the years have made journalism in the Philippines its most dangerous profession, the PPASJ has the potential to make the practice of journalism safer. Among those factors are the lack of public awareness of the problem, which the Plan would correct by encouraging the inclusion of a subject on journalists’ safety in the curricula of journalism schools. A companion to this solution is a campaign to encourage public understanding and appreciation of the role and value of a free press in society.

The Plan has five “Flagship Areas”: assuring integrity and professionalism in the journalism community; creating conducive working conditions for journalists; developing safety and protection mechanisms; engaging the criminal justice system in the defense and security of journalists; and putting in place a public information campaign, raising the quality of journalism education, and encouraging research.

The Plan is the responsible journalism community’s own version of a “whole of nation” approach that recognizes the need for, and seeks the implementation of multiple reforms not only in the environment in which journalists have to function, but within the press and media community itself. It does not preclude government participation in the effort to assure the safety of journalists, stop the killings, and end the culture of impunity. On the contrary. It wants such government agencies as the Department of Justice, the police, and the military to be involved in that campaign. Government is, after all, implicitly charged with the defense of press freedom and free expression by Article III, Section 4 of the Constitution, which explicitly declares that no law may be passed abridging those freedoms.

But the present regime’s sustained assaults on the independent press and media have made it clear that it is unlikely to lift a finger to help achieve the Plan’s goals. In the face of government indifference and even hostility, the challenge to the journalism community in 2020 is to mobilize its own human and material resources as well as those of academia, civil society, and the public in defending the independent and critical press as an essential power in understanding, democratizing, and reforming Philippine society. That will admittedly be difficult; meeting a challenge always is.