When I saw the huge drop in electricity demand for March 2020 compared to March 2019, -5.5%, a result of business shutdowns and enhanced community quarantine (ECQ) in the second half of the month, I was expecting that March inflation would be something like 1.5%. I was wrong.

I checked other major economies with March 2020 inflation data, and it shows that deflationary pressure is building up fast in Europe, in places like Italy, Spain and France, but not so much in Asia (see the Table). 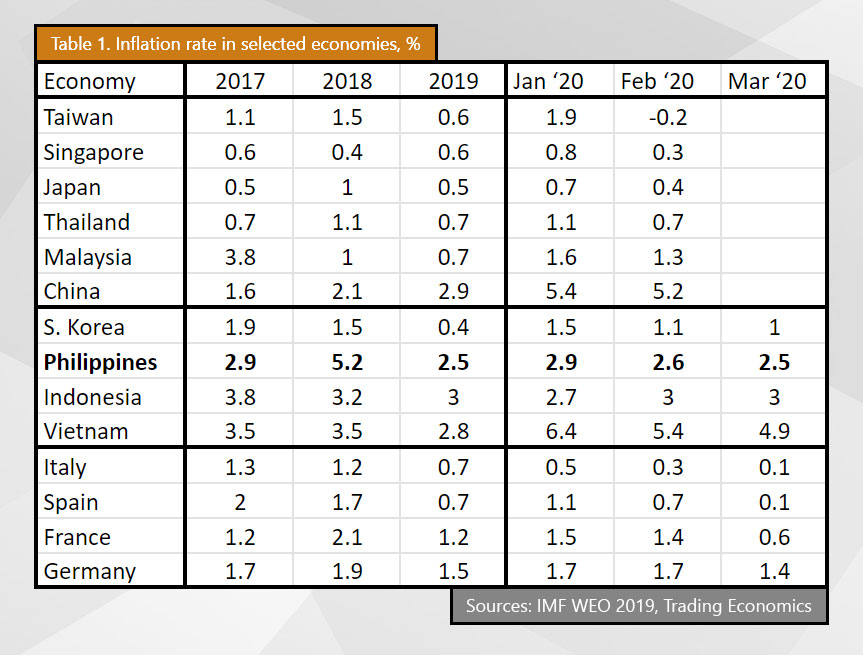 The reason for my rather bleak expectation for the Philippines’ March inflation is that I was expecting that less economic activities and business shutdowns means less income for the people and so their demand for various goods and services will decline, leading to decreased prices.

Of the 11 commodity groups that constitute the inflation basket, only Transport registered a price contraction in March, -1.8%, and it is understandable. But with closure of all malls and movie houses, all restaurants and bars (except food take out and delivery), I was expecting that at least these three commodity groups — Recreation and culture, Alcoholic beverages and tobacco, Restaurants and Misc. — would experience price contractions too. Did not happen. Prices of alcohol and tobacco products are now determined more by high and rising taxes, not consumer demand.

What spiked inflation instead was in Food and Non-alcoholic beverages, from 2.1% in February, it went up to 2.6% in March. The likely reason for this are those blockades and lockdowns starting March 15 when Metro Manila quarantine was implemented, worsened by the so-called “enhanced community quarantine” (ECQ) for Luzon by March 17. These adversely affected food supply — chickens, hogs, beef, vegetables, fruits, rice, etc. — with delayed or even spoiled products.

Government cash and food distribution started around March 27 when P65 billion of the P275 billion in new spending under the Emergency/Bayanihan law have been released to local government units and have given spending power to some poor households.

So three factors — high taxes on alcohol, tobacco, sugar products; blockades and delays in transportation of raw food products; and government cash handouts — were the main reasons why a decrease in economic activities did not result in significant decrease in prices.

I am expecting that inflation will decline significantly in the next two to three months, then go up in the succeeding months as the impact of Central Bank money printing will kick in.

The BARMM timetable: Another COVID casualty?

Government dropped the ball in the IT-BPM industry

Trump energy policies and the US elections