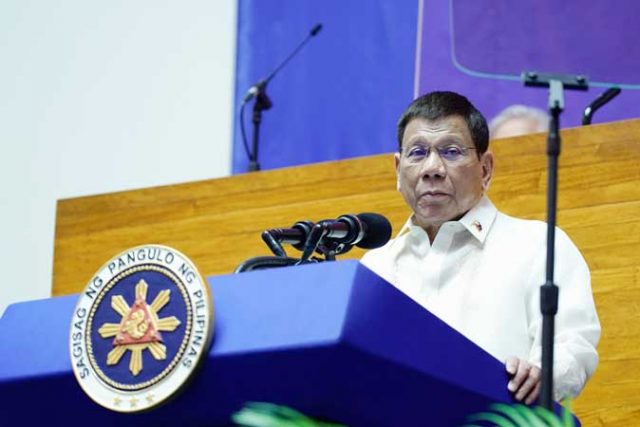 One journalist did say that President Rodrigo Duterte compounded the “lie” about the reason behind the shutdown of the operations of ABS-CBN’s free TV and radio services. But she did not outrightly call him a liar, and neither did the others.

As Mr. Duterte was delivering his State of the Nation Address (SONA) on July 26, PhilStar.com, online news site Rappler, and Facebook fact-checker Vera Files were tweeting in real time what were false in his statements, with the latter reminding its audience that he had made the same claims earlier and had been proven wrong several times.

Among other corrections, they pointed out that despite Mr. Duterte’s claim that the nightmarish problems of commuting to and from work or school within the National Capital Region and surrounding areas had passed, the truth is that there is not enough public transport available because of the on-again, off-again pandemic lockdowns. Despite his alleging the contrary, getting information such as Mr. Duterte’s statements of assets, liabilities and net worth (SALNs) from agencies of the executive branch of government is still as problematic as ever despite his executive order that supposedly makes ease of access to government-held information a matter of policy. Among other problems, the Office of the Ombudsman has imposed limits on the media and the public’s right to access the SALNs of executive officials.

After his two-hour and 45-minute SONA, ABS-CBN network, CNN Philippines, and Manila Bulletin online also fact-checked his speech and took issue with his version of his administration’s pandemic response and his allegation that he had dismissed the Bureau of Immigration officials involved in the 2020 “pastillas” scheme in which travelers from China, who were then banned from entering the country, were allowed into it upon payment of a P10,000 bribe.

Mr. Duterte’s claims quite simply fly in the face of reality. The country is still under severe threat from COVID-19 and its variants because, among other reasons, there are not enough vaccines for the 70 million Filipinos who have to be inoculated to achieve herd immunity. Neither is it true that those accused of devising the “pastillas” extortion scheme had been fired; instead many are back in their jobs.

In a separate article on July 27, Rappler’s Vernise Tentuco also noted how Mr. Duterte “amplified the lie” that ABS-CBN was denied the renewal of its franchise last year because it had tax liabilities.

The Bureau of Internal Revenue (BIR) certified in 2020 that the network had not been remiss in paying government the required taxes. The House of Representatives committee on franchises was looking for any excuse to deny ABS-CBN a new franchise; tax evasion was just one of them. Their real reason for the shutdown was Mr. Duterte and his congressional cohorts’ displeasure with the way the network had been reporting such issues as the extrajudicial killings that characterize the regime’s brutal “war on drugs,” and China’s driving Filipino fisherfolk away from, and occupying, the country’s Exclusive Economic Zone (EEZ) in the West Philippine Sea.

None of these media organizations challenged the veracity of Mr. Duterte’s claim that, thanks to his so-called “war on drugs,” parents and their children are now safer at night in the mean streets of Philippine cities. The possibility of arbitrary arrest, harassment, or even murder by the police has, after all, been added to fears of being held up, raped, robbed or killed by criminals, even as the drug problem persists.

Neither did they point out that the extrajudicial killing of suspected drug users and pushers has widowed thousands of wives and orphaned thousands more children who, denied the care of their husbands, fathers, and breadwinners face uncertain and bleak futures.

Despite those lapses, the fact-checking the above media groups and practitioners are doing can mitigate the rampant disinformation and misinformation on governance issues among much of the population. It is especially useful in helping voters realize that every administration with an eye on the next elections makes it a point to make itself appear worthy of remaining in power by, among other means, toying with the facts, and the Duterte regime is no exception.

All governments lie, but some need to do it more than others. The Duterte regime’s egregious failures in governance put it in the latter category. It also has to play fast and loose with the facts because of what Mr. Duterte himself has declared is the imperative of his and his clique’s remaining in power so he can, he believes, retain his immunity from suit.

The regime’s keyboard army of trolls and the government media system it controls, together with some of its highest officials’ disdain for the facts, are the principal means through which it spreads its version of events and issues. But what makes their efforts so rewarding is mass ignorance of the governance and political issues that has long been a hindrance to the realization of this country’s democratic pretensions by making the election of false and incompetent leaders inevitable.

Not that mass ignorance does not afflict older, supposedly more “democratic” societies. In 1922, the American journalist Walter Lippmann argued in his book Public Opinion that the world is far too complex for the mass of the populace to understand to enable them to craft the policies that will address society’s problems. A number of scholars, researchers and academics have since arrived at the same conclusion. Some have concluded that that reality makes democracy a farce and not necessarily the best form of government, and have even suggested that only those sufficiently informed on public issues should be allowed to vote.

Nearly a hundred years later and despite this stage in human history’s supposedly being the information age, the same phenomenon persists not only in the poor and underdeveloped countries of the world, but also in the most “advanced” such as the United States, where electing someone like Donald Trump president is possible because of mass ignorance of the needs of society and the means of addressing them.

Lippmann’s “solution” was for those knowledgeable in governance and politics and in social, economic and other issues— “specialists” — to craft the appropriate policies and to propose them to the government, which will then convince the majority to approve them through the media, the educational system and other institutions: to “manufacture” the consent of the governed.

“Manufacturing consent” is a form of manipulation. It empowers a fallible few, and keeps the mass of the populace as ignorant as ever of even the same issues and the policies they are being made to approve.

The democratic solution is to make accurate and relevant information available to as many people as possible through the same institutions as well as through sectoral, mass, and non-government organizations (NGOs).

This is admittedly easier said than done. Both the educational and media systems have problems that in many instances detract rather than add to the sum of public knowledge. Most NGOs are able to reach only a relatively few people. But at least some NGOs and mass organizations, and some sectors of the media and their more responsible practitioners, are doing what they can to combat disinformation and to educate the populace on such issues as the need for the competent and honest leadership that can lift this country out of the pit of poverty and despair and bring it into the ranks of the prosperous, developed and independent nations of the world.

To lift or not to lift?